Warhammer 40,000: Dawn of War II is a fun and fascinating game with a bit of an identity crisis. In one corner you have an explosively intense multiplayer real-time strategy experience, brimming with savagely satisfying competition. In the other, you have an odd and somewhat enjoyable single-player campaign that plays more like an action role-playing game than an RTS. The relationship between these two disparate entities is superficial; the structure and gameplay of the campaign has little in common with that of your skirmishes against other players or the computer. It's a bizarre dichotomy that doesn't always work, but online play is so deeply rewarding that the scattered campaign missteps are easily forgiven.

The first question that you might ask yourself as you play Dawn of War II's lengthy campaign may very well be: Where does the strategy come in? It's certainly not your typical RTS experience, putting you in control of up to four squads of Space Marines (and only Space Marines) and sending you off to exterminate your Ork, Eldar, and Tyranid foes. You won't be building a base or churning out units, but rather maneuvering your few commander-led squads around the map (likely as a single group) and beating up the beasties that stand between you and your mission objectives. Your goals may entail capturing a particular structure, recovering a stolen object, or even defeating an end-level boss(!). How's that for defying genre conventions?

This relatively simple gameplay is not what you'd expect from a strategy game, and strategy fans, including those who adored Dawn of War II's illustrious predecessor, will be disappointed that the "S" is missing from "RTS" in this instance. That's because the campaign is more akin to an action RPG, and if you look at it from this perspective, you're more likely to enjoy the journey. The game isn't going to dissuade you from that approach; the elements of a role-playing game are all accounted for. You will level up your squads and earn new abilities and bonuses, collect items and loot on the battlefield, and spend time between battles equipping your commanders with the various armor sets and weapons that you earn. With these RPG mechanics come the usual addictive loot-hoarding and unit personalization, what with various skill paths from which to choose and usable items that your commanders can equip.

Thus, Dawn of War II's single-player campaign isn't really strategic at all, but you will make tactical decisions that move beyond simple mouse clicking. In a mechanic pulled from the developer's own Company of Heroes, some squads can lay down suppressive fire, which slows your targets and hinders them from a quick escape. Units can be garrisoned or take cover behind certain objects, a mechanic easy to implement thanks to a slick interface and simple but effective visual feedback. However, the most important facet of a successful battle is your familiarity with each commander's unique abilities. Whether it is one's rally cry or another's jump-pack-powered stomp, effective use of skills (along with items such as grenades and satchel charges) is not only your key to victory, but also a visual and sonic delight. Seeing a dreadnought squash a ripper swarm, or a lictor alpha yank a powerless assault marine with its lethal flesh hooks, is enjoyably violent and makes battles fun to watch.

It takes a while for the campaign to rev up, but even once it is in full swing, some tedium will eventually set in. You'll visit the same maps many times and fight the same enemies, and though the prospect of loot and new abilities will keep you pushing forward and trying out new options, you'll long for some more traditional RTS gameplay to mix things up. You'll also wish for a stronger tale to glue it all together, but in a surprising move by a developer known for great storytelling, the yarn unravels one or two interesting threads (including the surprising origins of your dreadnought commander) but is little more than a reason to throw a bunch of Warhammer 40K units together and watch them tear each other to bits.

For a different approach, you can invite a friend to play campaign missions cooperatively, and though this option is welcome, its implementation could have used some tweaking. Dawn of War II provides no co-op matchmaking option, so you'll need to know the Windows Live ID of your prospective companion to explore that possibility. Also bear in mind that though the game's host will reap the persistent experience and loot rewards, the guest will leave everything behind when returning to his or her own campaign. It's fun to play with a friend, though. You split command duties with your partner, so the moment-to-moment gameplay requires less micromanagement but gives you more leeway to play around with tactical options.

Dawn of War II's multiplayer component couldn't be more different from its single-player campaign. For those interested in the joys of online competition, you’ll find an exciting, brutal, and highly competitive strategy experience awaiting you online. It's more traditionally structured than the campaign, in the sense that you will manage some resources and churn out some units of your own choosing from a base structure. It's also more strategic, as is obvious from the moment you enter the multiplayer menus. You have four races to choose from: Space Marines, Orks, Eldar, and Tyranid. Once you've selected a race, you choose from one of three commanders, each with a particular role to play in battle. A Tyranid ravener alpha can dig tunnels, granting your units quick travel when you most need it; an Eldar warlock will embolden the front lines with its powerful spells. Not only does each race come with its own strengths and weaknesses, but your choice of commander (and the accompanying abilities) will further determine the appropriate play style. There are a lot of different ways to play, and many of the different strategies make themselves obvious in just a few hours of play.

Those strategies are incredibly important, because Dawn of War II strips away the base building of traditional RTSs and puts the burden of success directly on how well you manage your units and how efficiently you exert control over the moment-to-moment proceedings of the match. You'll still queue up your units at a home structure, but resource gathering is inextricably tied to the action, given that you must capture control nodes scattered around the map to generate power and requisition. Actually, you might say that there are three resources: to activate certain global powers, you must fill a gauge by slaying enemy units.

This structure forces you immediately into the thick of action, and you might even encounter your foe in the first minute of play, should you both rush for the same node. Knowing the strengths of your squads is the only way to survive. A shielded hive tyrant and ripper swarm can soak up a lot of damage, so it might be best to capture the node first before assaulting units jockeying for the same position. On the other hand, Eldar enthusiasts may want to off the enemy with a few fire prisms before attempting capture. Throw in equippable skills and items for your commander and squads, and you've got a recipe for intense action spread across the entire map. Indeed, Dawn of War II's multiplayer matches are insanely fun even when you're on the losing side because you're constantly engaged with every facet of gameplay at any given moment.

This is especially true in the game's awesome six-player team battles because triumph comes by way of Dawn of War II's victory nodes, which must be captured in addition to those that contain resources. Like in the Battlefield series of first-person shooters, capturing one of these positions causes the opposing team's point total to diminish. The more victory points you hold, the faster your foe's points bleed away, and you win the match by stripping them down to zero. A closely fought match retains its powerful vigor for the duration, and the longer you fight, the more likely you'll see some of the game's most impressive units and abilities. A lumbering carnifex sporting a venom cannon is a sight to behold in the fury of battle, and the looming sight of a looted tank covered in makeshift spikes is both imposing and amusing. The well-designed maps are the perfect size for these skirmishes, though the small number of maps--seven in all--is disappointing. Likewise, there aren't any large-scale free-for-alls: At release, Dawn of War II's multiplayer maps support only one-versus-one and three-versus-three matches. Fortunately, the unpredictable nature of the gameplay keeps the maps feeling fresh, as does the keen artificial intelligence, should you limit your fight to computer-controlled commanders.

Dawn of War II's impressive production values enhance the intensity of your encounters. The game looks great across the board, from its outstanding destructible environments, to shimmering ambient lighting, to remarkable unit animations that make every battle look as though the entire war hinges on it. Although zooming in close to units isn't very helpful from a gameplay perspective, doing so reveals a wealth of terrific details, such as the rusted plating on dreadnoughts or a hormagaunt's chillingly sharp talons. Explosions, warp blasts, and other special effects not only look great, but also sound absolutely phenomenal. A barrage of intense battle sounds will burst from your speakers, but individual touches such as the way Orks call out "dakka dakka dakka" as they fire their weapons emerge with clarity. Assisted by a cinematic orchestral soundtrack that swells with drama without overreaching, the sound design provides a constant stream of audio feedback that puts you in the thick of the action without crossing the lines of good taste.

How you approach Dawn of War II depends on what you're looking for in a real-time strategy game. If you're looking for an incredibly fun and intense multiplayer and single-player skirmish experience, few RTSs provide combat this exciting and dynamic. If you were hoping for a similarly dynamic campaign mode, you'll find that the strategy has been mostly stripped away in favor of role-playing elements. This divide may help the game appeal to a wider audience, but it also leads to an identity crisis that Dawn of War II never comes to grips with. Regardless, this is a game that real-time strategy lovers should play, if not for the loot-happy leveling of the campaign, then certainly for the constantly enjoyable online component that will keep you glued to the screen for hours at a time. 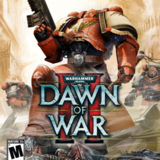