WarGames is a decent real-time strategy game in the Command & Conquer vein.

In 1983, MGM released the movie WarGames and changed my life forever. The film transformed my casual interest in computers into an obsession and actually motivated me to learn programming. So when I heard that MGM Interactive was making a game based on the movie, I was pretty psyched. After a few weeks with WarGames, however, I was pretty disappointed. This game has a nice 3D graphics engine but adds nothing else of substance to the very familiar RTS formula.

The premise of the game is similar to that of the movie. In an attempt to play the latest video game from Protovision (run by David Lightman, Matthew Broderick's character from the movie), you actually kick off a real-world conflict between humanity and the government's WOPR computer. Apparently, the WOPR has evolved sufficiently to develop its own armies and equipment, and it believes that it can eliminate all war by simply eliminating humanity. Problem: None of this information is ever conveyed to the player in the beginning of the game. True, there are a few pages in the manual that explain some of this, but how many of us read the manual before starting a game? The game could really have used a cutscene to set up this chain of events (instead of the useless fake commercial that kicks everything off).

Stepping down off my cutscene soapbox, I will say that WarGames faithfully executes all of the required elements of a Command & Conquer-style RTS game. The game includes 30 missions - 15 if you play as the humans and 15 if you play as the WOPR. In each mission, the first order of business is to build a base and enhance your troop strength. WarGames allows you to keep your constructor unit after he assembles a building (which is a nice touch) and uses a pretty cool airlift sequence to animate the arrival of new vehicles. Also, you can queue production for all of your units and, although money is usually tight, most of the basic units are pretty affordable. The units themselves are well balanced, if somewhat unspectacular.

Money is the game's only resource, and you use the hacker unit to acquire more of it. When you send the hacker into a computer center, he can acquire funds and accomplish a ton of other tasks, including upgrades to your armor and weapons. The voice of the hacker is pretty funny, as are several of the others used throughout the game. The game also uses a familiar and funny message to inform you of incoming e-mail.

There's no denying the game's slick 3D engine, but let's not kid ourselves here: This is no Myth. The two games may both use 3D, but the WarGames engine cannot truly compete with the beautiful technology behind Bungie's stunning visuals. Still, the vehicles in WarGames are detailed and fairly well animated. The terrain is nicely done also, and the rolling 3D landscapes add some depth to the battles. The ground units, on the other hand, are pretty unappealing. The sprites used to illustrate infantry in this game look dated and decidedly out of place against the 3D environment. Not that the troops should all be 3D polygon models, but they could look a bit more realistic - the WOPR drones look like they were yanked right out of Robotron.

The mission structure in WarGames is neither a strength nor a weakness. You won't find any Myth "Shadow of the Mountain" missions in this game, though you won't find any MechCommander-style "replay it 50 times before you win" missions either. The missions are of the puzzle variety, however, so if you're looking for an RTS game that lets you develop your own strategies for success, you probably won't enjoy WarGames very much.

WarGames' most serious failing is the gameplay. For starters, the enemy AI is not terribly bright (despite all marketing hype to the contrary). On nearly every mission in the game, WOPR forces will make a beeline for you and your base as soon as they discover where you are. This was highly reminiscent of Command & Conquer in skirmish mode, when you played AI opponents in pseudo-multiplayer games. The computer's aggressive tactics certainly make the game challenging, but they also make it predictable. The friendly AI is decent, but is marred by atrocious unit pathing - the worst I've seen in an RTS game. When you order a group of tanks to attack, they pile up on each other so that only one can bring its gun to bear. Ground units meander all over the map when other friendly units moving towards the same destination block a narrow pass. I even saw one of my jeeps floating merrily down a river on one mission, when I had ordered it to cross at a bridge (must've been a shallow river...).

The difficulty stepping, which is not that bad overall, suffers from a few weak points throughout the game. For example, when you first encounter the WOPR's massive Mk IV Walker, you'd think that you would only have to fight one so that you could gauge its strength and be sufficiently warned of the danger for subsequent missions. Instead, you have to fight at least three on the same mission (while also handling the other, lesser Walkers and ground troops).

The final disappointment with the game comes from the near-total lack of a tie-in to the film. The name is there, the WOPR is there, as are the names of Lightman and Professor Falken. But that's about it. This game could easily be played in a vacuum, with no mention of the film at all, which makes it seem as if the WarGames license was used simply as a marketing gimmick (now that would be shocking, eh?).

Still, WarGames is a decent RTS game in the Command & Conquer vein. If you're hoping for a game that captures the feel of the movie or that can compete with the likes of Total Annihilation, Starcraft, or Myth, you will be sorely disappointed. But if you just can't get enough of building bases and solving puzzles disguised as battlefields, you will probably get a kick out of WarGames. 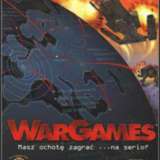