War World is an uninspired mech combat game that isn't worth your time.

War World for the Xbox 360 is a port of a game by the same name that appeared on the PC in 2005. It was received with lukewarm reviews on the PC, but it was applauded for doing many things well, including offering a large amount of mech customization. Though it never offered enough to stand out among PC shooters, War World seemed like it might fare better as an Xbox Live Arcade game selling for just 800 Microsoft points. Unfortunately, time has not been kind, and this version lacks the aforementioned customization options that earned it a few accolades three years ago.

War World is easily one of the best-looking games available on Xbox Live Arcade and offers a 100-level single-player arcade Deathmatch mode, along with four multiplayer modes on eight maps. Yet while this seems like an impressive array of features on paper, War World quickly devolves into a generic third-person shooter with little variety.

Any fun that might be had in War World comes solely in multiplayer. There are four multiplayer modes: Deathmatch, Team Deathmatch, Capture the Flag, and Bomb Assault. You've likely played the first three modes elsewhere since they're practically requisites for the genre. Bomb Assault is the most fun, challenging both teams try to plant a bomb to destroy the enemy's target. It is unfortunate that War World comes across as a game tailor-made for online multiplayer, yet there is a lack of an online community. Considering that there are very few people even playing the game on Xbox Live at the time of this review, the lack of online competition will probably drive you to the even less interesting single-player Arcade mode.

The Arcade mode guides you through 100 levels across the various maps. You can also play Deathmatch and Team Deathmatch with bots. The Arcade mode is the most interesting though, because you progress through the levels while controlling all of the 10 different mech classes on maps that become increasingly challenging. One glaring omission is the ability to customize your mech, which has become a standard for the genre over the years and was even included in the PC version of War World.

War World offers no tutorial, but rather, it has a loading screen with many actions mapped to all of the buttons. Your eye will naturally gravitate toward the buttons mapped with missiles and stealth, but you aren't told that you can only use those on mechs that come equipped with those capabilities. This will leave you jamming on buttons that seemingly do nothing until you figure out that fact on your own.

Once you do get a handle on the controls, there is a lack of balance between the mech classes. The large mechs are slow to turn and often get stuck in between objects, such as platforms or trees, effectively turning you into a still target. Smaller opponents can effortlessly get in close, circle around you, and chip away at your health. You can get away from them in Arcade mode because they're not smart enough to stick close to you, but that's rarely the case against human opponents.

Because of these issues, you will likely stick with the smaller classes, which are fast and fun to control but still highlight the remaining problems with War World. One of those problems lies with the mech classes that excel at long-range shots because there is no ability to zoom the camera. This makes it very difficult to line up such long-distance attacks and turns your intended advantage into a disadvantage. Additionally, power-ups and ammo are strewn about the terrain but feature no labels, so when you collect them, there is no notification as to what you're picking up. This forces you to stare at your heads-up display to see what has been changed or added. It's not a huge problem, but it is annoying because the small, indistinguishable icons make it difficult for you to quickly scan the field looking for ammo or other items you may need.

War World really sets the bar high for visuals in an Xbox Live Arcade game. The textures are nice, the environments are well rendered, and the mechs are finely detailed. Unfortunately, the frame rate is sporadic, even when playing in single-player. Only with the infusion of human opponents does War World actually play like a serviceable, if very basic, mech combat game. But even then, the lack of originality and variety on offer makes it very difficult to recommend. 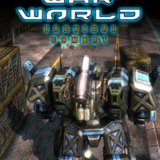 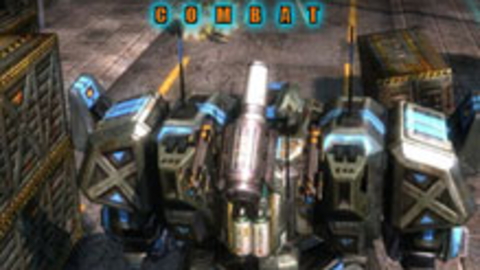 Designed with both single and multiplayer modes, War World: Tactical Combat is a fighting game where players build and battle the other mech warriors.