The Second World War appears to be undergoing a renaissance of sorts in Europe, judging by the number of World War II games that have been coming across the Atlantic recently. The latest of these is War Times, a 3D real-time strategy game from Spanish developer Legend Studios. Considering that Spain was one of the few European nations to sit out that epic conflict, the potential was certainly there for War Times to approach World War II from a different perspective. The game gets off to a good start, with a cool musical introduction and cinematic, but it quickly becomes clear that this World War II game has more than its fair share of problems.

War Times has two single-player campaigns that let you play as either the Allies or the Axis, and you can control the four major European-theater combatants, Germany, the Soviets, the British, and the US. Each side has unique units and capabilities that lend them some distinct playing styles; the Soviets and Germans are very tank heavy, while the Americans rely on air power to compensate for their weaker armor. Most of the battles, such as the invasion of France and Operation Market Garden, require you to generally follow the traditional real-time strategy method of building up a base, gathering resources, and cranking out a bunch of tanks to rush your opponent. In War Times, this is a tedious process because of the slow-paced nature of the game. In order to establish your base, you must build a headquarters, which takes about two to three minutes. You can't build anything else until it's complete, so you're practically sitting on your hands until then. Once the headquarters is complete, you have to build support structures, such as oil rigs. Each of these is required to unlock critical buildings, such as power plants, which unlock additional buildings, such as vehicle factories, so once again you have to wait around even longer. Establishing a decent-sized base then becomes a dull, repetitive exercise each time you begin a new mission.

You are also limited by the amounts of resources you've gathered. There are only two resources in the game: ore and oil. Depending on the side you're playing, you may harvest oil automatically just by building a rig over a deposit. However, you're still going to have to dispatch workers to collect ore, and workers are a perfect example of another big flaw in the game, pathfinding. In order to ensure a maximum harvest rate, you often need to dispatch at least six workers to each resource. As they travel between the headquarters and the resource deposit, they'll often run into each other and come to a stop. This causes a traffic jam as other workers are caught in it, and it takes a second or two for everything to get sorted out. This behavior is mimicked by tanks and infantry units to a frustrating degree. If you lasso a bunch of tanks with your mouse and have them move to a certain location, you'll watch as several of them jam against each other and then slide across the ground. Others will bump into the tank in front of them, causing a bumper-to-bumper chain reaction. Other tanks will go off in wild directions because they can't maneuver around buildings or terrain properly. And instead of arriving at the destination as a powerful armored fist, tanks will arrive piecemeal, becoming easy pickings for the enemy. Units also don't move in concert together; smaller, lighter tanks will dart ahead and get chewed up, while heavier units plod behind and arrive too late to be of any use.

Enemy AI is generally no better. The computer will throw troops at you ineffectively, and it won't adapt to any tactics you adopt. But a nice trick is that it will also hold forces in reserve and then rush you when you venture out from beyond the safe confines of your base. However, in certain missions, AI reactions are mostly scripted. For example, in one level you have to traverse the map with a small handful of units, and in a couple of locations there is a large horde of tanks with no purpose other than to wait until you get close enough, which then triggers their attack. War Times does have a few interesting, unconventional levels. For example, in the Battle of Britain, you're tasked with destroying British airfields without losing too many aircraft. In that mission, you don't even have a base to manage, as your aircraft appear on scene as if they're flying from a base off the map. In that situation, you have to carefully manage fuel and make sure you have enough fighters massed to keep the bombers unhindered.

War Times has a dated graphical look to it. Infantry are very blocky, and you can almost count the low number of polygons in each of them. Meanwhile, buildings and structures are very boxlike in appearance, with little detail. There are a few nice water effects, but those are ruined by the bland, repetitive textures and the poorly drawn and rendered vegetation. The camera controls are also limited--there's barely any range to the zoom levels, and you can't tilt the camera angle that much.

Multiplay offers skirmish between human and AI opponents. The multiplayer maps tend to be very symmetrical in design, so each side has the same resources and terrain. Against the AI, these battles can be frustrating, because the computer can build and manage multiple bases much more efficiently than a human. The result is that it can swamp you with superior numbers and superior vehicles. Against either the computer or a human, you'll still be frustrated by the pathfinding problems in the game. War Times also suffers from some minor translation gaffes, something that seems to occur more and more often as game development moves overseas. Publishers need to invest a little more time and effort in making sure that their games are translated correctly. In the end, War Times is a fairly conventional real-time strategy game that covers a lot of ground that we've seen in better World War II-based games. 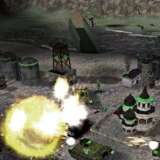 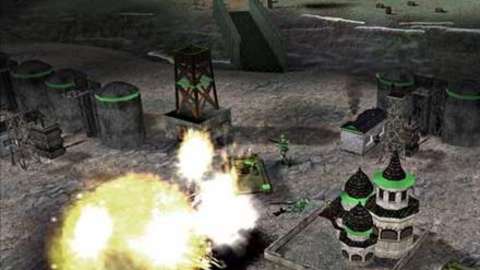