Much of War Inc.'s potential goes unfulfilled because the real-time combat doesn't measure up.

War Inc. is a game that, at first gander, looks like it has a lot of potential. Unfortunately, much of that potential goes unfulfilled because of a real-time combat mode that doesn't measure up.

There's a lot to like in War Inc., which looks like Jagged Alliance crossed with Command & Conquer and Capitalism. The premise puts you in charge of a private security force that performs "services" for major corporations. Each element of your corporation is under your control: investments, research, designing and building units, selecting freelance jobs, creating a grand strategy, and fighting the battle itself.

The over-arching design has a lot to recommend it. The big picture is controlled from your "office," and allows you to dabble in as much or as little of the detail work as you want. Finances and research can be handled automatically, or you can control them personally. Using the financial screen, you buy and sell stocks to try to drive your profits up and attempt to take over other companies. Some information on the performance of these stocks is provided, but more is needed to make this segment of the game useful to the novice.

The money you make can be put back into hiring researchers and designing new units. Research gives you access to better classes of hulls, weapons, armor, engines, and other features that compose a unit. To make the most of these advances, War Inc. enables you to put your own vehicles together, equipping them with the firepower, horsepower, technology, and other features for a completely custom set of fighting units. This is very nicely done.

As freelance missions become available, you can choose which ones to take, with victory yielding a profit ($5 million, for instance). Of course, your operating expenses come out of this, so you not only have to fight the battle, but fight it cheaply. Creating a strategic approach to each mission is made possible with a planner that lays out all the objectives. You begin with a base that enables the construction of units. Once your forces are built, you can divide them up among different squads and send them out to attack the primary, secondary, and tertiary targets in real time. When a strike force reaches a target zone, the game drops into a real-time combat mode.

And here's where the game falls flat. Everything leading up to the combat (maybe 20 percent of the game) is quite interesting. The other 80 percent is a whackingly subpar Command & Conquer-style real-time combat game. Enemy AI is marginal, and battles always seem to unfold the same way, with a large strike force winning the day over any tactical finesse. Units have strange properties, with soldiers using TOW missiles on each other and strolling blithely by enemies without attacking. The maps aren't very good, the graphics are boring, and the soldiers are rather dim. All the good stuff that came before can't make up for this.

In addition, missions seem to follow similar patterns of attack an objective, fall back for base defense, attack another objective, defend, and so on. This makes even the finest grand-strategy seem a bit pointless. There's a single campaign game, some quick combat, and network play, but I just wish it all added up to a more satisfying experience. I also wish it were more stable: It crashes often, refuses to run in Windows 95, and has a flawed, outdated DOS installation routine.

As it is, despite some interesting and innovative touches, War Inc. will be buried beneath the coming flood of real-time games. And that's a shame because it started out looking like a real contender. 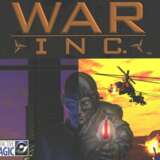