After years of developers storming the beaches with a battalion full of WWII real-time strategy games, it's tough to even glance up when yet another one thuds into stores. Still, as Relic's fantastic Company of Heroes proved last year, not all WWII games are created equal. Now Digital Reality's War Front: Turning Point also dodges the WWII-as-sleep-inducing bullet, largely by starting with the usual Axis-versus-Allies premise and then serving up an alternative-history twist. This makes the story and setting about as historically accurate as those in the Command & Conquer series, although it's hard to care about little things like that when you've got aluminum zeppelins and flying jetpack Nazis blowing stuff up.

However, gameplay is more derivative than the out-there backdrop implies. What you've got here is a generic action RTS game sketched out to look and play a lot like the few hundred other generic action RTS games to hop on the C&C bandwagon over the past decade. It includes the usual dual-campaign options for solo play, with matching 11-mission sagas told from the American and German points of view. Single-player and multiplayer skirmish modes are also on offer, with the latter featuring an innovative "secret orders" game type that provides each player with a hidden victory goal. You build bases with the expected headquarters, barracks, and factory buildings; you establish mines and supply trucks to get resources flowing. Heroes with special skills and the ability to level up lead your troops into battle. You crank out armies and have at it with enemies until either you go up in flames or they do.

Units are set up along traditional rock-paper-scissors lines, so everything has a ready counter. When you send tanks into the fray, the enemy responds with AT bunkers and bazooka soldiers. When you send out bombers to blast the AT bunkers and soldier-producing barracks, the enemy comes back with AA guns. And so on. Every unit in the game is designed to be chewed up and blown to pieces in impressively cinematic fashion, so combat relies more on assembly-line tactics than strategies on the battlefield. The action here is undeniably catchy and fast-paced, but you've seen lots of RTS arms races exactly like this one many times before.

Still, even though units go to war as in just about every other RTS ever made, they are at least jazzed up with that alternate-history angle. The game is based on the notion of the Wehrmacht conquering Britain in 1940 and giving Nazi scientists the breathing room to concoct nifty weapons that make the real-life Me-262 and V-2 buzz bomb look as advanced as the bayonet. By the time the game picks up a few years later, both the Allies and the Soviets have gotten on the future-weapon bandwagon as well, which gives battles a gritty sci-fi character. Nazi grunts include soldiers with jetpacks and hyperpowered flamethrowers, while mech-like exoskeletons tote heavy machine guns and rockets. The Allies have an earthquake bomb that devastates huge sections of towns and a base-protecting shield generator called an ORB. The Russians can field an ice-spitter tank that freezes enemy units and an armored personnel carrier that burrows underground to transport troops behind enemy lines.

All of the sci-fi stuff in War Front is bolstered with standard WWII RTS units, such as infantry, fighter planes, repair trucks, half-tracks, and movie tanks that include Tigers and Shermans, so combat has a half-and-half feel. While you might experience déjà vu, every time you get bored, you just have to order up a German aluminum zeppelin or a Russian tank with that groovy freeze ray to instantly liven things up. The action doesn't move far away from generic WWII RTS though. It almost seems like you're playing a typical game in the genre, albeit one modded up with a handful of crazy new units. In some ways, this is a good thing because battles remain grounded in real-world combat and don't go overboard with high-tech gadgetry. Digital Reality strikes an almost perfect balance here between real history and "what if?" ruminations.

Some technical issues get in the way of all the carnage. Vehicle pathfinding is often terrible presumably because object-collision detection is too rigorous. This is the bane of a lot of RTS games, so it's hard to be too critical over the Keystone Kops antics on display here. Yet, it's irritating to see a truck twirling in circles because it's surrounded by friendly infantry that refuse to move, or to watch a line of tanks slowly smash down one tree after another even though there's a perfectly usable road just a couple of feet away. A first-person shooter option where you can hop into bunkers and manually fire away at enemy tanks and planes during missions doesn't work at all because the frame rate drops through the floor as soon as you switch over to it. And the mouse cursor seems off a bit, forcing you to click just below or at the very bottom of units to select them on the main screen, which can cause serious problems in fast-paced battles.

The presentation provides some other mild annoyances. The dark, gritty look of the game makes most levels a treat for the eyes when you're simply gawking at the scenery, especially during the frequent episodes of stormy or snowy weather and when detonating a building with rocket fire. But the browns and blacks are so dominant that the palette often seems grimy. This, in concert with some extra jaggies on buildings and trees, makes parts of some levels so dark and dense with detail that units are obscured. Finally, the audio could use added variety. Unit acknowledgement commands are recited so frequently that it's like listening to a monk's meditation chant--only it's doubtful that lines like "Blast 'em!" and "Ready for battle!" are going to bring anybody inner peace.

Although War Front: Turning Point isn't different enough to change the minds of those bored to tears with WWII, this is an almost-great RTS regardless of the subject matter and the traditional gameplay. Give it a look, even if you think that you're all Nazied out. 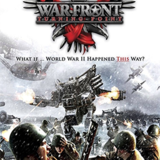 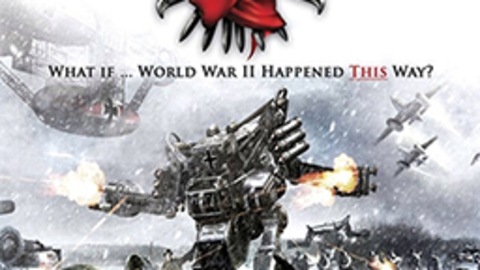 War Front: Turning Point is a strategy game that takes you to an alternate World War II, in which Hitler is assassinated in the early days.