Voodoo Vince adds an interesting twist to the regular platform game formula, and it's definitely worth at least a look.

When the 3D platformer was popularized by Super Mario 64, simply translating the standard 2D platform game experience into the 3D world was enough to excite most players. Over time, the genre has grown up. Banjo-Kazooie made it cool to put a million different types of collectible items in a platform game. Eventually the genre grew out of this and moved on to other twists, like Ratchet & Clank's weapon-based gameplay, Super Mario Sunshine's versatile water pack, and Blinx's ability to warp time. Microsoft's latest platform game, Voodoo Vince, puts its own unique stamp on the genre by trading in most of the jumping and timing-based action for a lot of nicely done puzzle-solving. For good measure, this is a great-looking and fantastic-sounding game, though, unfortunately, it's on the short side.

You play as Vince, a third-rate voodoo doll owned by Madame Charmaine. In the game's opening, Charmaine is kidnapped by thugs in the employ of one Kosmo the Inscrutable, an evildoer who wants Charmaine's special zombie dust. His lackeys get the dust, but they also spill quite a bit of it as they make their escape. The dust warps reality, bringing Vince to life while also filling the world with evil monsters. Charmaine communicates with Vince via a telepathic link, leading the little doll from level to level as he works to clean up the mess caused by the spilled dust, while also hunting down his boss's abductors. The game's story is well told via in-engine cutscenes, but it's over pretty quickly. Unless you get hung up on a puzzle or boss fight, Voodoo Vince can be completed well under the 10-hour mark. It'll take longer if you're bent on collecting all of the game's optional items, but that doesn't really add too much to the game. The game's densely packed levels do offset a bit of the short length, though, because you really get to see and do a lot along the way.

Vince has a pretty standard repertoire of moves for a platform-jumping hero. He can double-jump, punch enemies, perform a spin attack (that looks and sounds like it was taken directly from a Crash Bandicoot game), and execute a headfirst dive attack that serves as Vince's take on the now-standard butt-stomp. When Vince is in the air, you can slow his descent by hitting the left trigger. Eventually you gain moves, like a target-based grappling hook swing that works and looks quite a bit like the one found in the recent Rayman games. Vince can also unleash a super voodoo attack that eliminates nearby enemies. This attack is usually pretty funny because, as a voodoo doll, Vince's most effective method of attack is to simply hurt himself. So you'll see drills boring into Vince's head, UFOs flying up and blasting him, trucks running Vince down, and all sorts of other neat little animations. Vince's moves aren't what make Voodoo Vince such an interesting game though.

The fun part of Voodoo Vince comes from its puzzle-solving. Some of the game's levels are incredibly small and simply ask you to solve a basic puzzle--like finding a way to distract a dog that guards the front door of a mansion--to proceed. Other levels get far more elaborate. One area requires you to get a trumpet so that you can play a little jazz with a skeleton doorman, convincing him to let you pass. The trumpet is in the pawn shop, however, so you can't get it without money. A nearby costume contest can earn you some money, but first you have to find a costume. Did we mention that once you secure the trumpet, you still have to go to a jazz club to learn how to play it? Did we mention that all the stores are open at different hours of the day, which means you have to get up to the clock at the top of the level and manipulate time to open and close the different businesses? In practice, this specific puzzle is a lot less complicated than it sounds, but it's a good example of some of the game's multistep puzzle-solving. In the event that you get stuck, the game is usually pretty good at cluing you in on how to proceed.

Even the game's boss battles are usually focused more on being tricky than simply having good reflexes. As a voodoo doll, you usually have to find a way to hurt yourself in a major way to take out the game's bosses. That means you'll be getting sandwiched by colliding trains, diving headfirst into pits of spikes, making rocks fall on your head, and more.

The puzzles are usually great, but the platforming portion of Voodoo Vince isn't nearly as polished. While the game's environments look nice, it's occasionally difficult to determine if a sloped surface is too steep to stand on or not. This means you'll occasionally jump on what looks like a safe position only to slide off to your death--falling in a bottomless pit or water instantly kills you (though, if you have extra lives remaining, you'll come back to life in a nearby location). Fortunately, Vince automatically grabs hold of some ledges before plummeting. Being attacked by monsters causes more gradual damage, reflected by your life meter. Bags of zombie dust are strewn about each level, and every time you collect 100 bags, your maximum health increases.

The game has a very cool look to it. The action takes place in and around New Orleans, and you travel through city streets, bayous, mansions, and more. The game's Tim Burton-esque art design has the look of a twisted cartoon that fits the game's mixture of humor and the undead nicely. Vince himself is full of life, and the sequences used for his voodoo attacks are especially amusing. The enemy design is interesting, at first, but it gets a little tiresome as you proceed--mostly because you fight the same sort of imps throughout much of the game. Also, Vince's shadow occasionally shows up in some weird spots, casting itself around in an unrealistic way. But even when you take these aspects into consideration, Voodoo Vince is still a great looking game.

It looks great and it sounds even better. The music is the real standout here. Even the short loop used for the game's loading screen manages to be a little creepy while still offering a very catchy sound. Overall, the game's soundtrack has a nice, jazzy sound to it that fits the location and the subject matter perfectly. The rest of the game's audio is also strong. The game's voice acting is well done, with the sarcastic Vince really stealing the show. The script is well written, with some funny bits tossed in here and there, like when Vince wonders where his "obligatory boss fight" is at the end of one of the sections.

Voodoo Vince's short story makes it a great choice for a weekend rental, but the game is cool enough so that those who are intrigued by the premise or by the game's puzzle-solving, platform-jumping gameplay will likely find it to be worth purchasing. Either way, Voodoo Vince adds an interesting twist to the regular platform game formula, and it's definitely worth at least a look.

View Comments (6)
Back To Top
7.8
Good
About GameSpot Reviews 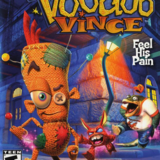