V is for void (and very good).

Void Bastards never lets you get too comfortable. As you explore spaceships, scrounging around for supplies to push yourself that little bit further, your strategy has to be flexible. An electrifying zapper is good for immobilizing some enemies, but it's useless against those with shields. A lobbed grenade is handy against those shielded enemies, but it prevents you from taking more devastating firepower with you to fight beefier foes. Void Bastards forces you to make small decisions with each stop at a not-so-abandoned vessel, which makes these encounters challenging and exciting.

Void Bastards puts you in the space shoes of numerous rehydrated "clients" aboard a stranded personnel vessel, whose AI has had no choice but to rely on its dangerous cargo to repair the ship for a final jump to its destination. You are tasked with searching any nearby ships for special items and other resources, using components you find to craft new weapons and tools that will help you both evade and combat the numerous nasty enemies protecting these rewards. This encapsulates the main loop you'll find yourself in throughout the 15-hour campaign.

The game hops between a frenetic first-person shooter when you board ships and a galactic exploration adventure outside of them. Your small vessel requires fuel to travel, while you need food to survive each passing day in the empty void. Both of these resources are found on nearby ships, which you can inspect from afar to identify its possible inhabitants, lucrative rewards, and unique modifiers before making a choice on whether to board or pass by. Modifiers can include anything from security systems being graciously offline to the hallways being stripped of lights to make your journey through them more treacherous. These small modifiers keep your ventures on ships exciting, providing knock-on effects for you and its enemies to play off of.

Punchy one-liners and some dark humor drive Void Bastard's world-building, which is primarily conveyed by your AI handler and occasionally by intercom systems on ships you board. Neither expand on the lore enough to make the setting any more interesting than it is at face value, but it's entertaining enough to earn a few chuckles throughout. The story is supported by gorgeous comic book-style cutscenes that bookend each completed objective. It has a distinct style that immediately gives Void Bastards an identity.

The comic book aesthetic transitions over beautifully into gameplay, where the action looks like it was ripped from the narrative panels preceding them. Explosions litter the screen with onomatopoetic descriptions of their destructive power, represented visually with bold colors and thick black outlines. Enemies move as if they're 2D sprites living in a 3D space, rotating at fixed increments to face you. It's a striking style that makes Void Bastards immediately recognizable and imbues its adventure with personality.

With its rogue-lite structure, Void Bastards is as much about staying alive as long as you can as it is about dying. You won't lose all your progress when your current character expires, but you will lose any hoarded ammunition, fuel, and food. You'll also lose your current character, who might be equipped with both useful and detrimental abilities. One might be capable of silently sprinting, letting you get by enemies faster without alerting them. Another could do the exact opposite by randomly coughing and giving away your position. It's fun to work with and around these traits, but Void Bastards graciously lets you keep any weapon and gadget upgrades as well as objective progress intact should you lose a character early.

Crafting these items is streamlined, too. A clear and concise upgrade tree shows you exactly what you need to build a new item, as well as what components you should look out for to upgrade them a tier. You can even tag certain pieces of gear and have any possible nearby locations with their required components show up on the galaxy map, clearly charting you a course towards them. Void Bastards rewards you with items for upgrades frequently. You'll likely have something new to craft after most dangerous expeditions onto nearby ships, which not only helps shake up each combat encounter with some new weapons and toys, but also expands your options for engagement with the numerous types of enemies you'll come into contact with.

The game's enemy variety is key to keeping each expedition surprising, and they start off simple enough. Slow-to-react but explosive blue alien blobs and dim-witted Janitors litter the halls of your first few ships, eventually giving way to quick and foul-mouthed Juveniles and skittish Scribes that run away from danger. As you descend into deeper nebulas with more rewards, the dangers increase, with formidable variations on previous enemies. Hard-hitting Stevs will make quick work of your health bar while Secs can quickly render your loadout redundant, as their impenetrable shields block everything you throw at them.

The randomized selection of enemies on ships and their increasing ferocity keeps you thinking about which weapons to take on board, as well as how they can combine for particular strategies. You're given the choice of three items to bring with you as you dock, and your loadout cannot be changed once you've boarded the vessel, making your understanding of the perils aboard paramount to your selections. For example, if a ship's security systems are down but it's overrun with hulking Stevs, it might be better to leave behind a stun gun and bring along the autonomous and explosive Kittybots, which do a great job of distracting foes as you slip past. Ships with smaller enemies in large numbers might benefit from a weapon with a faster rate of fire over a semi-automatic pistol. Since each slot serves a purpose (weapon, explosive and gadget) it's fun to play around with different combinations and see which combine in both creative and effective ways.

There are hundreds of weapons at your disposal, but the variety between them and the tools you have allows for this experimentation. It's satisfying to use an immobilizing stun gun to freeze groups of enemies in place before launching a package of small grenades that bounce and ricochet off the walls of a narrow walkway to deal devastating damage. A silent dart gun can let you poison enemies from afar, letting you watch them slowly die as you soak up their incoming fire with a personal shield should you be spotted. Or you could take a more indirect approach by sucking up an enemy into your rift gun, placing them in an airlock and launching them out into space. The careful distribution of ammunition for each weapon prevents you from stockpiling enough for your favorites all the time, which pushes you to become familiar with your entire arsenal too. It avoids being frustrating because of how fun each weapon is to use in the right situation, but also makes you carefully consider when to use the right tool for the right job.

The ships you board can also throw up strategic combat options for you to exploit through their randomized construction. Simply being able to lock doors lets you create traps for enemies to wander into, letting you slide in a few explosives before locking them into a hallway with no escape. You can override security systems and make them fight for you if you have enough credits to spend, while environmental hazards such as nuclear spills and severed electrical cables can serve as nuisances or convenient traps depending on whether you see them in time or not. Void Bastards gives you maps for each of the ships you board from the start, letting you focus on the foes lurking in their halls rather than remembering how to get back to your exit. Resources are hidden between enemies and hazards; this keeps exploration fun and interesting while ditching the tedium of basic navigation.

Void Bastards succeeds because it keeps you moving forward and rewards you on the way, without feeling like a pushover as a result.

Void Bastards doesn't introduce changes to its gameplay loop throughout its course, and its narrative objectives don't shake it up meaningfully. But there's a steady flow of new weapons and suitably challenging enemies to test them on, so you don't get stuck in a rut. And because you maintain some progress between deaths, dying doesn't dissuade you from jumping right into the next run. Void Bastards succeeds because it keeps you moving forward and rewards you on the way, without feeling like a pushover as a result.

This delicate balance highlights the assortment of randomized levels, enemy compilations and uniquely designed weaponry that all make Void Bastards an absolute delight. It's wildly entertaining to go from ship to ship and eradicate enemies with constantly shifting strategies, and equally engaging to use your scavenging gains to make yourself feel increasingly powerful. It's a satisfyingly stylish shooter that manages to play as well as, if not better than, it looks.

View Comments (26)
Back To Top
8
Great
About GameSpot Reviews 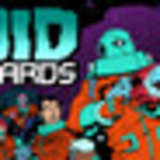 Alessandro spent 15 hours traveling between hundreds of ships, nearly completing every weapon upgrade and falling in love with a shotgun-like staple gun. His worst character had an annoyingly loud cough, and he didn't regret losing him to the void. Review code was provided by the publisher.