In the end, Virtual On: Oratorio Tangram is one of the most visually impressive Dreamcast games yet, alongside Soul Calibur and Shenmue.

Virtual On has been the mech-lover's dream since it first appeared in arcades back in the mid-'90s and subsequently in the A-for-effort port to the Sega Saturn in 1997. When AM3 unleashed the Model 3-powered sequel, Oratorio Tangram, the general opinion was that the game was little more than a flashier, more graphically potent version of its predecessor. In the meantime, similar games like Armored Core and Frame Gride have come along and upped the ante with customizable parts and stunning graphics, respectively. Now that games like Virtua Fighter 3tb, Sega Bass Fishing, and Sega Rally 2 have all found their way home, how does Virtual On: Oratorio Tangram fare as not only a Model 3 conversion but as a port to the consumer market?

The first part of that question can be answered like this - VO:OT is, graphically, the best Model 3 conversion yet, with incredibly accurate models and all the special effects of the arcade, with little to no compromises made. Whereas Virtua Fighter 3 had inconsistencies and slowdown compared with the original arcade version, and Sega Rally 2 lacked the full-bodied look of its arcade counterpart, VO:OT is basically a pixel-perfect translation. Closer than any Model 3 conversion yet, the game never suffers from any sort of slowdown and cruises along at a shimmering 60 frames per second at all times. Sega hasn't taken any shortcuts to achieve this either. Every background, while admittedly simple, is rendered in full three dimensions, while special effects abound at every turn. After an impressive opening CG sequence, you'll be treated to a parade of light-sourcing effects, gorgeous gourad-shading, crystal-clear transparencies, and other effects that most gamers now take for granted. However, you've never seen graphics like these, wrapped around polygonal models like these, in such high resolutions as these, since Soul Calibur.

Despite all the visual mayhem onscreen, Sega still found ways to implement real-time shadows as well, keeping the entire graphics package intact. While definitely different, this is the first game to visually stun you the way Soul Calibur did. On par with every graphical hardware effect out there, Virtual On: OT is a visual tour de force. The graphics look so good, in fact, that you will find yourself in the game's watch mode for hours just watching the comp-controlled mechs duke it out. Each mech, designed by Macross designer Katohi Hajime, is constructed of a huge number of polygons and is represented in a DNA model and an RNA model. These differing models feature different attacks and color schemes. While some backgrounds are spare and barren, others are replete with large stalagmites jutting up from the ground or large obstacles and structures to hide behind and use for cover. Other stages will add elevating slopes and hills where you can mount your attack or defense. Some battles even take place underwater, a la Dural circa Virtua Fighter 2. Intelligent use of these geographical elements will often be the difference between a loss and a win. Your mech also changes in appearance as you take damage, much as the robots did in the old PlayStation title Zero Divide. When a part of a leg or arm is blown off, for example, you'll see interior parts of the mech showing through.

The gameplay is where things can get difficult in VO:OT. If you've ever played this game in the arcade, you may know that the game was designed for use with a special dual stick controller. These twin sticks were an integral part of the arcade cabinet; they let you have sturdy, tank- and airplane-like control of your mech: Alternate pulling and pushing of the left and right stick turned your mech; pushing inward made it duck; and pulling them apart caused your mech to jump. Each stick also contained a trigger and a thumb button, and each of these buttons was used for separate attacks. Various combinations of button presses resulted in different attacks. While there were only four preset configurations on the Dreamcast controller for the Japanese version of the game (almost all of them equally useless), Activision has added two new ones which are good enough to clear up the absolute need to play the game with an import dual stick controller.

Though the online side of the game - found in the Japanese version - isn't present, there are still a large number of ways to play this game. VO:OT offers a horizontal split screen, a vertical split screen, a picture-in-picture split screen, and link-cable capabilities. A training mode is also on hand to help you acclimate to the controls, which is quite necessary since the game is very challenging. Naturally, the game adds a couple of playable characters and boss characters as well. All players will be able to find a mech they'll want to familiarize themselves with and master.

In the end, Virtual On: Oratorio Tangram is one of the most visually impressive Dreamcast games yet, alongside Soul Calibur and Shenmue. The game, although not significantly advanced beyond the previous version, is extremely playable, and it's an adrenaline rush on all counts. 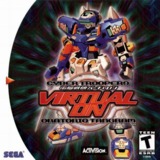 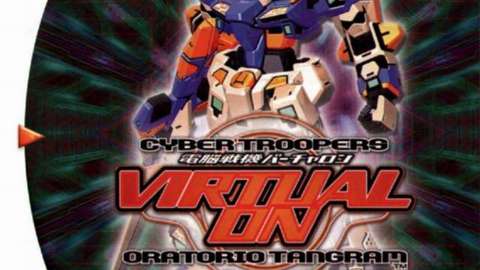 In the end, Virtual-On: Oratorio Tangram is one of the most visually impressive Dreamcast games yet, alongside Soul Calibur and Shenmue.

8.2
Sign In to rate Cyber Troopers Virtual On: Oratorio Tangram