Virtua Tennis 4 is a weak tennis game that fails to bring the series back to its glory days.

Considering Virtua Tennis was once the king of tennis games, its latest iteration is particularly disappointing, doing little to keep up with competition from 2K's excellent Top Spin 4. The graphical tweaks are nice, and the new minigames are fun, but at its core, Virtua Tennis 4's position-based shot mechanics are essentially identical to those in the 1999 arcade original. They're easy to pick up, but they feel dated and unrefined by today's standards, giving fans of the series a distinct feeling of deja vu and making you crave greater control over the ball. It’s not as if there's fun content to play through either. The career mode is inherently flawed, the online options limited, and the Kinect implementation is terrible.

Most of your time in Virtua Tennis 4 is spent using the standard controls, which are very easy to pick up; so much so that there isn't an in-depth tutorial to teach them to you. There are three main shot types to learn--top spin, lob, and slice--each of which is mapped to the face buttons while the left analog stick directs your shot. Performing more skillful moves, like drop shots and power shots, depends on your position on the court and around the ball. If you get close to the net, you'll perform a volley. If you get right underneath a high ball as it drops, you'll perform a power shot. Too far away from the ball when you hit a shot button? Then, your return will be weak. It's an easy system to learn, but it lacks depth and is far too forgiving; if you make contact, the ball is all but guaranteed to land in play. This removes much of the excitement from the game, as well as any scope for advanced tactics, making it frustrating when you want to perform a risky drop shot from center court but can't simply because of your position.

Each hit you land fills up a meter at the top of the screen. Once it's full, you can unleash the only new addition to your shot repertoire: super shots. These vary depending on your chosen player, but all take the form of an exaggerated slow-motion hit where the camera pans out from its default view. They look impressive, but they ruin the flow of the game. They're also not any more powerful than a standard power shot, so they're not especially hard to return, making them a pretty yet pointless feature. Other tweaks to the core mechanics are subtler, including animation adjustments that reduce unnecessary dives by CPU opponents, and make swings of the racket look more realistic. Despite these improvements, there's still a lack of realism in the way your player moves. This is most noticeable as your player moves across the court, appearing to glide across it without reacting to the surface. It simply doesn't feel right, with your player lacking weight and moving too fast.

A simple Exhibition mode lets you hone your tennis skills as one of many existing tennis stars, such as Rafael Nadal, Andy Murray, and Maria Sharapova in quick matches against the CPU or with up to three other players in local multiplayer. There's also an Arcade mode where you can do the same, but you compete in four small tournaments instead. You can bring the action online too, competing in ranked matches, where you earn points for victories and a place on a worldwide leaderboard, or player matches, where you just play for fun. Online play is largely lag free, but on the odd occasion you get a bad connection, matches are reduced to almost unplayable slide shows. The main draw, though, is the World Tour mode, in which you create your own player and try to make your way from lowly amateur to all-star tennis pro. Along the way, you have to compete in tournaments, engage with your fans in publicity events, and play a variety of minigames scattered across the globe. A star rating keeps track of your progress, which increases as you play matches and interact with your fans. The more stars you have, the more tournaments you're able to compete in and the higher your ranking on the global leaderboard.

Your journey to stardom takes place across four major continents: Asia, Australia, Europe, and North America. Each continent is divided into different challenges that are marked out by connected icons on the map. You move between them by using tickets, which are given out randomly by your coach. Each ticket has a number of points attached to it, signifying how many places you move across the map. Because they're randomly allocated, a certain amount of planning is required to use tickets effectively and participate in events. This can be frustrating, though, particularly when you're coming up to a big tournament. If you don't have the right number of tickets to reach it, you miss out on a lot of the game's content. More annoying is the fact that the icons used to represent events on the board are never explained, so you don't know whether you're aiming to play a minigame, tournament, or meet the fans--at least not on your first play-through.

You also need to be aware of how many events you're playing. Each event subtracts a day from your schedule, which counts down toward the start of the next major tournament. If you play too many smaller events, you'll miss the larger ones, meaning you have to wait until you've gone around the remaining continents before you get a chance to play them. The tournaments and smaller events start off relatively easy, with CPU opponents that barely know how to hit the ball back across the court, progressing to some seriously challenging matches against established players. If you're short of stars, you can participate in publicity events, such as endorsing T-shirts or meeting your fans. They're little more than text dialogues telling you about the event, though. The minigames are more fun. These range from skill-based games, such as Pin Crusher, a form of bowling where you hit a giant tennis ball at pins; and Bomb Match, where you play with a ticking bomb instead of a ball; to even weirder events, such as Egg Collector, where you hatch eggs scattered around the court and lead the chicks back to the mother hen while trying to avoid incoming tennis balls.

Each minigame you complete rewards you with coins that you can spend on new clothing for your character while also leveling up your attributes. Once you reach a certain level, new play styles are unlocked, such as hard hitter, which supposedly changes the feel of your character, but in reality, it does little to affect the gameplay. Minigames are also accessible outside of the World Tour in Party Mode, where you can play with up to three other players locally. Annoyingly, you can't set up a playlist of minigames to play through, meaning you're thrown back to the menu after each three-minute burst. If you're suitably equipped, you can play with the Kinect, though only in offline exhibition matches and in a specially created minigame. Doing so, though, is a painful experience, thanks to an awful camera setup. It flicks between first person before your shot and third person just as you're about to hit the ball, making it really difficult to line up your shot and know when to swing. Even when you make contact with the ball it’s difficult to perform different shots. Kinect often fails to recognise subtle flicks of your wrist and the speed of your swing, meaning you end up performing slow standard shots repeatedly. It's a shame because on those occasions that everything works as intended the controls feel good, with flicks of the wrist adding spin and faster movements resulting in harder shots.

Whether you choose to play with the Kinect or not, you're treated to a good-looking game, despite the occasional flaky animation. The backdrops are detailed, with ball boys, umpires, and serve-speed displays that make them feel like real courts. The character models are also greatly improved over previous games, looking much less like wax works and more like the players they're representing--despite some unfortunate sweat effects. Sadly, the sound effects leave a lot to be desired, with weak racket sounds and crowd cheers that lack atmosphere. This is exacerbated by irritating electronic music that can be heard in the background during every match.

Virtua Tennis 4 might be more arcade than simulation, but its control scheme is showing its age. It lacks refinement and makes you feel like you're playing a sophisticated version of Pong, rather than a game of tennis. There's fun to be had if you can see past the simplistic controls, or if you delve into one of the many minigames with friends, but it's hardly worth it. In almost every respect, Virtua Tennis 4 is outclassed by its rival Top Spin 4. 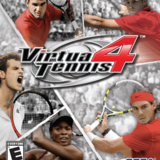