Virtua Tennis is too easy and inconsistent to entertain you for long.

To climb to the top of the tennis ranks in real life, you need to be a world-class athlete, put in countless hours perfecting your craft, and have an innate talent to hit a felt-covered ball extremely hard. In Virtua Tennis 2009, you just need stubborn determination. The only skill that will be put to the test in Sega's latest entry in its long-running tennis franchise is persistence. It will take more than 10 hours in World Tour mode before you face a competent opponent, which means it's harder to stay awake during matches than to win them. The core mechanics are well done, letting you easily hit the ball anywhere on the court, but the game is so devoid of life and is so insultingly easy that it can never capture the thrill of victory.

Virtua Tennis 2009 eschews an in-depth tutorial, but the mechanics are so easy to pick up that it hardly matters. After just a few minutes with the game, you'll easily be slapping shots all over the court, volleying with precision, nailing difficult cross-court shots, and doing a very good impression of a tennis marvel. You can smoothly glide across the court, getting in optimal position for a powerful return shot or rushing the net to keep your opponent constantly off balance. You won't break a sweat mastering Virtua Tennis because your move set is so limited. There are only three types of shots--top spin, lob, and slice--so the focus is on positioning rather than juggling between different special shots or worrying about your fatigue meter dropping.

However, after spending a few hours on the court, the problems become apparent. The game is far too forgiving, so you don't have to worry about crushing the ball out of bounds or slamming it into the net. As long as you can make contact, you are almost assured of getting the ball in play. The animations are also inconsistent. Although serving the ball or swinging your backhand looks fine, whenever you do something slightly abnormal, the game doesn't feel right. For example, when you run backward, your character never looks toward the ball, which makes return shots awkward, and you have a tendency to hit a stumbling shot even when the ball is in easy reach. None of these quirks by themselves kill the fun, but when combined, they make the action feel unrealistic.

The main draw in Virtua Tennis is the World Tour mode, but like the on-court action, what initially feels like a robust experience quickly devolves into monotony. You start as the 100th-ranked amateur in the world and must win tournaments around the globe to earn some credentials. Winning a tournament has you rise one to five spots in the rankings, so it will take quite a few matches before you get to the top. However, while it should be a thrill to finally prove your worth, it turns out to be a seemingly never-ending drag. Virtua Tennis is just too darn easy, so you can blow past your embarrassingly awful opponents, rarely losing a point, let alone an entire game. But you have to play through dozens of these tournaments to finally achieve pro status, which takes more than 10 hours of beating on helpless opponents. With no difficulty switch to toggle, you're stuck playing against these incompetent buffoons for hours on end, which makes for a tedious experience.

If you get tired of walloping the artificial intelligence, you can compete against humans in an online World Tour mode. This seems like a cure for the easy AI that makes tournaments so painfully boring. By winning an online match against real opponents, you can move up in the rankings, which lets you circumvent the repetitive nature of the single-player competition. However, this novel mechanic is ruined because of a laggy online experience. The jitteriness manifests itself in strange ways. Although you can move your character with ease, the other side of the net is an unpredictable mess. Your opponent will teleport from sideline to sideline, the ball will frequently hover in midair, and sometimes your opponent can return a shot even after the ball has bounced twice.

Despite the infantile difficulty level, it would have been fun to see your character blossom into an awe-inspiring king of the tennis world, but you don't even get to level up your player. When you finish training lessons or minigame challenges, you earn experience points, but these have only a mild effect on the action. Instead of building up your attributes, these unlock different play styles, which provide an almost imperceptible boost to your on-court abilities. For instance, if you level up your footwork, you can unlock Solid Defense, but you won't even notice a difference in how your character plays.

Ironically, the minigames are the best part of the game. They let you compete in a number of wild activities, from playing billiards to destroying falling blocks, and are easily the most exciting part of this otherwise bland experience. Each of the 12 minigames has eight difficulty levels, and they get mighty hard as you get deeper into the challenge. It's a shame that it takes so long to unlock all of them, because they are more engaging and satisfying than the real tennis action. Each has you use your racket to clear events that don't relate to real tennis, and it's silly fun to try to feed a hungry penguin a fish (by slapping the fish right at the penguin's gaping beak) or to nudge a curling stone into 200-point territory. Even though the reward for completing these is meager at best, it's still easy to get lost in their wackiness for a few hours as you avoid the drudgery of the main tournaments.

It's a shame that Sega didn't capture the frenetic energy of the minigames in the rest of the game. There is a distinct lack of energy in Virtua Tennis 2009 that makes the experience feel dull and lifeless. From competitors that don't seem to care whether they win or lose to mechanics that are accessible but lack depth, Virtua Tennis gets stale within a few hours. The audio brings it down even more, pumping bland rock music during the matches without even a commentator around to spice things up. Virtua Tennis used to be the king of the racket world, but it's going to have to put in a lot more work if it's going to regain the top spot. 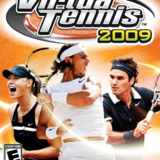 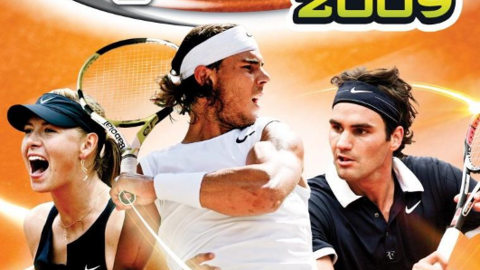 Virtua Tennis 2009 will again allow you to take on the likes of Rafael Nadal and Roger Federer to recreate some classic court battles.