Virtua Quest is hard to recommend anyone, given its poor controls, lackluster combat, and unenticing world.

Virtua Quest is a cross-genre hybrid that combines platforming, fighting action, and RPG character-advancement elements, and its major enticement is its inclusion of characters from Sega's Virtua Fighter series. Unfortunately, these elements just don't seem to come together very well--the action is plagued by loose controls and a bad camera, your scores of brain-dead opponents never put up enough of a fight to make things satisfying, and it's all set in a blandly designed world. Even the brief Virtua Fighter cameos don't do much to salvage this game, so unless you feel like taking Lei Fei and friends to the dirt as a too-cute youth by artlessly mashing buttons, you can safely give Virtua Quest a pass.

The world of Virtua Quest is one where many people shrug off reality and instead while away their time in Nexus, a vast virtual universe. Our young protagonist, Sei, is a cheerful fellow who's been tapped by his friend Hayami into trying out the life of a hunter, one who collects data chips from the far-flung reaches of Nexus and then sells them for cash. Hapless Sei soon gets drawn into a struggle against a mysterious organization that's kidnapping hunters while seeking out rare and powerful pieces of data called virtua souls. Virtua souls are the recorded combat data of powerful fighters, cataloged during a tournament in times of old, and they're hidden in scattered servers across Nexus. As an unwitting hero, Sei must collect the virtua souls before his foes, master the souls' powerful combat techniques, and pound endless waves of bad guys on his way to saving the day.

Much of the game is spent wandering the diverse servers of Nexus, searching for data chips and virtua souls. Sei has a simple repertoire of moves to cover the landscape: He can run and jump, hang from ledges, run on walls, and swing himself across impossible gaps using a special wire. The controls themselves aren't terribly responsive, and Sai tends to move and act sluggishly as a result, making many of the platforming areas you'll have to cross in each level increasingly tedious. This is compounded by a camera that seems determined to get in your way--while you can center the camera behind your character with the press of a button, the camera for the most part refuses to follow along behind you. So you'll be constantly pressing the button to fling the camera back into place while trying to swing across rushing water, trying to keep a group of enemies in view, and so on. You also can't move the camera freely, so there'll be many times you'll want to gauge a jump or some other move and be unable to, because you can't really see. This is just plain irritating and poor design for a game that requires so much running and monkeying around.

The other major action component of the game is the fighting system itself. You start out with a basic set of moves to strike, jump, throw, block, and charge your enemies. You'll encounter foes as you roam the worlds of Nexus; they'll spawn in as you go along in increasingly larger groups. Fighting these enemies is usually just a matter of mashing one of the attack buttons and throwing in an occasional block. Most of the time, your opponents move around slowly and don't act all that aggressively, making the bulk of your battles a brainless bore.

Further stacking the odds in your favor are the virtua souls, each of which is the embodiment of a character from the Virtua Fighter fighting game series. When you find a soul, you'll have to defeat it to gain its special move. While this sounds like it should be tough, considering the fighters you'll be up against (Akira, Lei Fei--all the crew is here), once you've gotten at least one virtua soul power under your belt, you can usually just dart around and repeatedly use that power to cheese your way to victory. And that's for the Virtua Fighters themselves, who are supposed to be strong opponents using skillful tactics--using virtua soul powers will basically obliterate all groups of enemies that come your way. There's no real need to move beyond a basic level of controller-smashing skill, and given that the vast majority of the enemies you're fighting are terrifically stupid, fights end up unsatisfying and flat. Considering that the Virtua Fighter series is known for its deeply complex fighting mechanics, the brainless combat is a real disappointment.

Based on how well you do during a given server run, you'll earn a letter ranking upon the completion of the level. That ranking influences your hunter rank, and can open up new missions for you to attempt. There are also numerous upgrades to Sei's abilities that you can both find and purchase, as well as upgrades for his adorable robot sidekick, Bit. Bit usually follows you around on your adventures, and depending on what type of "food" you feed him, you'll get various effects like information on nearby special items, nearby dangers, and so on. There's a goodly amount of upgrades available, though the upgrades themselves tend not to be terribly critical, especially considering the low difficulty level of the game as a whole.

The best word to describe the visual style of the game is "bland," as the various cityscapes, outdoor environments, and building interiors you'll explore are sparsely detailed and uninteresting. The main characters themselves are a little better, with their wide-eyed anime cuteness and outrageous hair, but there aren't that many enemy types, so you'll end up bashing the same kinds of foes over and over again. The Virtua Fighter characters are by far the best of the bunch in terms of detail and visual flair, but they're only widely spaced bright points in a sea of dullness. The GameCube version of the game looks slightly better than the PS2 version, but both games suffer from the same flat design.

The music in the game, what little there is, isn't remarkable in any way, and the voice acting is both uneven and uninspired. Plenty of lines sound like they're just being read off a script with little attention to the context or the flow of dialogue, and since you can't skip the cutscenes, you're stuck listening to it all. At least the battle sound effects tend to be reasonably meaty, giving you good aural feedback when you kick the senses out of yet another group of mindless drones.

Virtua Quest is hard to recommend anyone, given its poor controls, lackluster combat, and unenticing world. Fans of the Virtua Fighter series are likely fans because they enjoy tightly controlled, challenging battles, and those fans won't find any of that here. While the character cameos are a nice novelty, they alone are not enough to salvage this flawed game. 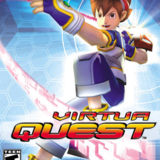 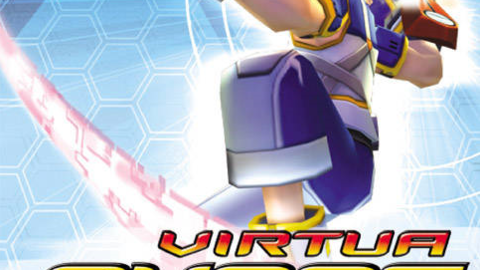 In Virtua Quest, you play the role Sei, a young boy. As you explore each stage, you'll discover Virtua Souls, data clusters that contain information about the martial arts abilities of the legendary Virtua Fighter characters.