This highly technical, complex yet accessible, genuinely entertaining fighting game should belong to anyone with any interest in the genre.

Though it was released a year and a half ago, Virtua Fighter 4 remains the overall best fighting game currently available on any platform. Actually, technically, it isn't--that honor now belongs to Virtua Fighter 4: Evolution, a suitably impressive follow-up to last year's game. VF4: Evolution is part of Sony's $20 "Greatest Hits" collection right out the gate, presumably due to the success of last year's game, but it isn't just a rerelease for those who might have missed out on VF4. This highly technical, complex yet accessible, genuinely entertaining fighting game should belong to anyone with any interest in the genre.

The most obvious difference between VF4: Evolution and its predecessor is that the newer version features two brand-new characters, for a total of 15 different selectable fighters. The newcomers are Brad Burns, a thuggish kickboxer, and Goh Hinogami, a freaky-looking judo fighter. Brad and Goh actually seem a little out of place among Virtua Fighter 4's fairly straightforward but now-classic cast of characters, such as Japanese martial arts master Akira and professional wrestler Wolf. In fact, the new fighters in VF4: Evolution would certainly look more at home among the exaggerated lineup of Namco's Tekken series than they do in the ranks of the relatively understated Virtua Fighter cast. Clearly, then, these characters are intended to spice up Virtua Fighter a little, since for better or worse the series has never been as over-the-top as other fighting games. Purists might not be thrilled by the new character designs and the attempt to give Virtua Fighter more of an edge, but be that as it may, these are a couple of interesting and distinct new fighters. Brad can dodge, weave, and sway to avoid his foe's strikes and then counterattack with his own devastating punches and kicks, and Goh can use a variety of takedowns, grappling moves, and submission holds to overpower his opponent.

These two join the entire returning cast of VF4. The older characters, including Shaolin monk Lei Fei and shoot fighter Vanessa who made their first appearances in last year's game, have some new moves this time around to expand their already huge arsenals of punches, kicks, counters, reversals, evasive moves, throws, and more. The controls are perfectly intact--you still move your fighter around using the directional pad and attack and defend using the punch, kick, and guard buttons (and various combinations of these). Three buttons may not sound like a lot to work with, but in fact they are used for literally hundreds of different moves. Most moves in the game aren't difficult to execute (though some, such as a few of Akira's, are incredibly challenging to pull off), but learning how and when to best use them can take days, weeks, or months, easily. Much of this knowledge naturally comes from practice, and as your skills improve, you'll likely just grow to appreciate the game more and more. It's no exaggeration to call VF4: Evolution's gameplay incredibly deep.

Besides the new characters, the other big change in VF4: Evolution is that it completely overhauls the interface of the previous version. There's an even better training mode this time around, which walks you through every single move for every character and teaches you all the different gameplay mechanics and unique strategies and combos for each and every character. There's even a comprehensive glossary of terms, as though VF4: Evolution were some kind of "do it yourself" program for becoming an expert fighting-game player.

That's actually a fitting description. VF4: Evolution, like its predecessor, doesn't necessarily have as much pick-up-and-play appeal as some other fighting games. However, for those serious about these types of games or for those interested in the idea of playing games skillfully, the training mode of VF4: Evolution is a great way to learn the ropes. For some more-casual players, fighting games can be a good way to blow off some steam--pound on some buttons, pound some opponents. VF4: Evolution can fit that bill just fine, though it consistently rewards your good timing, precision, and finesse, and unlike all other fighting games, it also provides you with the resources to dramatically improve your skills. The training mode can be set up to help you with the split-second timing required for many of the moves and will teach you everything from the simplest basics on up to the most advanced combos and strategies that the world's best players use. In the game's replay mode, you can actually watch a number of nail-biting matches between some of these players, if only to get a sense of just how good you or someone could possibly get.

VF4: Evolution features a typical versus mode for two players and an arcade mode for playing against the AI, but the main single-player option is called quest mode. It replaces VF4's kumite mode and essentially is similar--your wins and losses (as well as a huge variety of other statistics) are all recorded, and as you win matches, you not only earn higher ranks, but also unlock a great variety of cool, funny, or just plain weird items for your character. These can be used to alter most every aspect of your character's appearance, and you can then pit your custom fighter against a friend's. As long as the two of you use the same memory card, anyway. Though VF4: Evolution uses a convenient auto-save system for recording your progress and saving your stats for each character, unfortunately it doesn't allow you to simultaneously access data from two different memory cards--hard-core players looking to put their records on the line against each other will be annoyed by this oversight. On the other hand, they and other players should appreciate the game's 10th Anniversary mode, which replaces all the graphics (even for the new characters) and some of the music with retro Virtua Fighter-era models and textures. As well, you can unlock wallpaper for the game's interface, alternate win poses, and some other bonuses. Some of the unlockable stuff is pretty amusing, but these goodies can be few and far between. They're true bonuses--the incentive to keep playing quest mode comes not from them, but squarely from the excellent gameplay.

The main difference between quest mode and last year's kumite mode is that quest mode has more of a context: In it, you literally assume the role of an aspiring fighting-game player, traveling from one arcade to the next looking for competition. As you win successive matches, you eventually get to compete in tournaments as well as a variety of interesting match types that bend the core rules in one way or another. You'll also get to take on a variety of specific challenges, which may require you to win a series of matches without guarding or defeat a number of opponents by knocking them out of the ring or within a given timeframe, among other things. These help keep the back-to-back bouts as varied as can be and also help you hone certain skills.

Fighting games are at their most intense and entertaining when you play them against a similarly skilled opponent. That's absolutely true in this game's case. However, one of the best things about last year's Virtua Fighter 4 was that it featured artificial intelligence that was far superior to that of most such games, and which would usually deliver a very convincing and challenging bout. The AI in VF4: Evolution is much the same, meaning it's still outstanding. The difficulty ramps up nicely. Newbie players in the quest mode fight hesitantly and have poor reaction times. High-level players will punish you severely for your every mistake and will exploit any weaknesses you may have. Different players will have noticeably different playing styles, regardless of their choice of character. Sure, it would have been great if VF4: Evolution featured online play so that you could take on other players over the Internet. But this really is the closest a fighting game has ever come to simulating the thrill and even some of the feel of arcade-style competition. And besides, the rapid-fire pacing of the quest mode means you'll get most of the fun of intense fighting-game competition, with none of the waiting around.

As a matter of fact, VF4: Evolution's loading times are improved since last year's game--not that there was too much room for improvement in this regard--and just a few short moments separate each match. Likewise, the superb and perfectly smooth graphics of the previous version, though they're mostly identical this time around, have been further refined. The effects of aliasing (which make for distracting, jagged-looking lines in many PlayStation 2 games) are noticeably toned down in this installment. You might spot a bit of slowdown during some of the stage intros, but by the time the fighting begins, it's long gone. Other than that, most all the characters still have realistic-looking facial expressions, complexions, and musculature, making these some of the better character models in a 3D fighting game, or in any game for that matter. VF4: Evolution adds some new fighting arenas to the mix and updates some of the others, and generally these look great too. The game's audio is pretty much identical to last year's version and still recycles some of the same effects that the Virtua Fighter series has been using since its inception 10 years ago--but the sounds and character voices are still very fitting. Notably, VF4: Evolution adds some new music tracks that are a bit more hard-hitting than the synthesized tunes that are typical of the series, and these are quite good.

Last year's Virtua Fighter 4 bordered on perfection, and this new game is technically even better. Both its training mode and its main single-player mode have been further enhanced, and the two new characters are interesting to play as or at least against. The gameplay, meanwhile, is as fast, well balanced, and exciting as ever, and hard-core VF4 fans should appreciate some of the new high-level tweaks and adjustments made to it. Ultimately this game has more than enough to offer anyone interested in the subject matter, and for the $20 retail price, it's a steal regardless of whether you have the previous version already. No wonder there aren't as many fighting games as there used to be--it's difficult to fathom how a fighting game could significantly improve on this one. 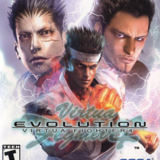 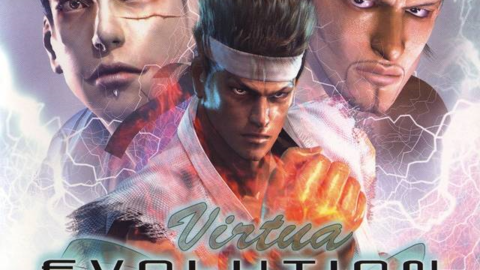 This highly technical, complex yet accessible, genuinely entertaining fighting game should belong to anyone with any interest in the genre.