What we have on display is a criminal waste of resources.

In what has to be a low point in AM2's storied career, Sega of Japan has seen fit to rerelease the former Model 2-based arcade hit and subsequent Sega Saturn port Virtua Cop 2 to the significantly more advanced Dreamcast. With VC2 purported to "move" around twice as many polygons as the original arcade version, and up to five times as many as the Saturn version, one might have expected a monster of an arcade port. After all, The Naomi board, which is roughly three times as powerful as the Model 2 board on which VC2 was originally based, easily ported House of the Dead 2, and at a blazing 60fps to boot. So, a graphically nontaxing on-rails game like VC2 would probably look great if given the Dynamite Cop or even Soul Calibur treatment. Instead, what we have on display is a criminal waste of resources.

As anyone who has fondled a Saturn or Virtua Cop 2 Stunner in an arcade will tell you, the game is a pretty simple affair. Point the thing, shoot anyone who wears a mask and doesn't say "Help me!," reload the weapon, and wash, rinse, repeat. Burrow your way through three levels, each with a separate path and a quick fourth boss, and poof, you're done. It was a great experience at the time, and, even as a port to the Saturn, it provided an excellent excuse to pull out that Stunner. Depending on which controller port you used, you play as Smarty, Rage, or Janet, three characters seen only briefly in the shortest of cutscenes. Janet, as you may recall, also appeared in Fighters Megamix. At the time, Virtua Cop 2 was a revelation. Enemies responded to the exact body parts that were hit, and your skilled shooters could score high points with carefully aimed justice shots that shot the gun out of an enemy's hand. VC2 was often credited with implementing authentic SWAT techniques in their on-rails routines, offering gamers a decent look at how real police would approach the scene of a crime.

Now that the Dreamcast version is here, do we have the ultimate example of Sega's light-gun prowess thus far? To be precise: absolutely not. Despite the DC having greater processing power than three Model 2s put together, the Dreamcast version of Virtua Cop 2 arrives at a level of quality somewhere between the arcade version and the Saturn version. The graphics are better than in the Saturn version, but inexplicably, transparencies aside, they are inferior to the arcade version, despite the addition of illogical "enhancements." Can you say PC port?For starters, when you start plugging bad guys, you'll wonder, Where did I get a taser from?, due to the lightning sparks thrown by your pistol. Imagine each goon being struck down by a lightning bolt every time you tag one, and you'll get the idea. The Japanese Dreamcast gun calibrates well with the game, but if a gun isn't available, the analog controller works just as well. The game lets you activate a select weapon function and an auto-reload, making the game easier than ever, since you can just cap away, with none of that "shoot off the screen" reloading stuff. In addition, the graphics suffer from repetitive low-res textures, blocky, ugly character models, and an interminably monotonous army of blond, male terrorists. Perhaps the most frustrating thing is to watch the game scroll along at 30 frames per second. Why this is, is incomprehensible, especially since the original arcade version ran at a flawless 60. The only concession to the Dreamcast's powers are some half-assed alpha-channel displays (read: transparencies) and pseudo lighting effects. Explosions and glass are no longer the dithered moire screens that the Saturn, and even the Model 2 version, spat out, while baddies light up when guns are fired.

The culprit could be the Windows CE environment itself. It's unknown whether it was used out of contractual obligation or simply because it would be easy to port the PC version. What is known is that the game hasn't been given the love it needs to survive yet another port such as this. As it is, Virtua Cop 2 was already a criminally short game, and even at the bargain price Sega is selling this game in Japan, it is still almost impossible to recommend as a purchase. The only thing of interest in this game is the rampant number of Shen Mue posters littered around VC2's spartan backgrounds, but it's almost embarrassing to see such a fine game touted in such a lousy, lazy port.

Despite a couple of token secrets (big heads, mirror mode, etc.), Virtua Cop 2 for the Dreamcast is still a pretty lousy way to waste 40 bucks. Unless you really need this game in your life, keep in mind that this is nothing more than a shoddy port of a once-great game. It's surprising to see Sega release such an unflattering piece of software that doesn't even live up to its original arcade standard. You should fear other ports of this nature; Sega could run the same scheme with Virtua Fighter 2, Daytona USA, Fighting Vipers, Manx TT, Sonic the Fighters - you name it. But standing up against recent light-gun triumphs like Sega's own Gunblade N.Y., L.A. Machineguns, and Namco's Crisis Zone, Virtua Cop 2 doesn't stand a chance. With a purported Virtua Cop 3 in the works, perhaps Sega unleashed this game as a reminder/taste of what's to come. However, the formula, as prescribed, fails to remedy the ills it causes in the first place. 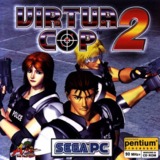 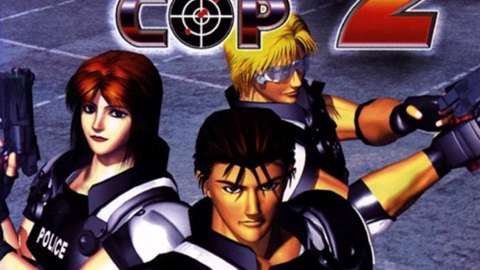 Sega and the AM2 team have delivered an incredible sequel that takes the concept to a whole new level.