Newcomer Monster Games came up with an interesting concept for Viper Racing: Create the type of ultrarealistic physics model found in games like Grand Prix Legends and use it to simulate racing a high-dollar production car.

Newcomer Monster Games came up with an interesting concept for Viper Racing: Create the type of ultrarealistic physics model found in games like Grand Prix Legends and use it to simulate racing a high-dollar production car. It might not sound that groundbreaking, but with the exception of 1993's Car and Driver, it's probably the only game featuring a car like the Dodge Viper that isn't 95 percent arcade action and 5 percent realistic racing.

So if the box art of a Viper tearing down a speedway led you to believe you were getting a beefed-up Need for Speed III or Test Drive 5, you're in for a big surprise. The Viper's the only authentic car featured here; the other choices are generic rides called "sport," "sedan," and "exotic," along with a plane tossed in for the hell of it. The graphics work for the cars doesn't come close to what you find in Test Drive 5, and the scenery and terrain are merely average compared with the gorgeous background visuals of Need for Speed III. And even when you play the game in arcade mode, you'll discover the physics model is considerably more demanding than in pure arcade racers.

But it's a whole other story if you head into Viper Racing expecting a highly detailed, realistic simulation of one of the world's most powerful and alluring automobiles. Though Viper Racing's pleasures (perhaps "rewards" is a better word) aren't discovered quickly or cheaply, some patience and practice will reveal a pulse-quickening game that feels so real at times that knuckles whiten and teeth grind.

What makes Viper Racing so immersive is the physics model MGI created for the game. At first, it might seem a little too realistic, as you find yourself constantly fishtailing out of control, sliding off the track into a field, or even rocketing off a cliff. But when you realize what sort of car you're driving - a 3400-pound beast with an 8.0-litre V10 capable of generating 450hp - and remember that you can't sling it around like a Formula One Racer, you'll find yourself staying on the track and gradually becoming more competitive with the aggressive computer-controlled cars. And I do mean aggressive: These guys'll bump you off the road and into a river or valley with the sort of precision you'd expect to see at a Joey Chitwood show.

At about the same time, you'll also begin to notice just how real the driving experience seems, particularly if you've got a force feedback wheel. As you head through curves, you can feel when you're about to lose traction completely and back off the gas to avoid disaster, and even heading down a straightaway you can sense the contours of the road. The sound effects, from engine noise to the squeal of skidding tires, are very good and add subtly yet effectively to the overall driving ambience. Even if you turned the sound off, though, the banging, bumping, and powersliding action is plenty good enough to make you think you're screaming down a stretch of highway at 165mph.

Quick races can be run against computer opponents, the clock, or your own best performance ("ghost car") on any of the game's eight tracks and in any vehicle, and there are options to set the difficulty level of opponents and the physics model for the cars. Every setup feature in the garage - you can adjust camber, toe-in, bump, anti-roll bar, rebound, springs, ride height, brake bias, wheel lock, spoiler size, and gear ratios - is accessible in a quick race, making it a good way to get a general idea of how you should set up for each track once you start the career mode.

I say general idea because the career mode starts you out as an amateur, limiting your adjustments to brake bias and wheel lock. What this means is that how quickly you advance to the next level of competition depends on your driving, not your setup expertise. As you win races and start socking away prize money, you'll be able to add performance-enhancing accessories to improve your exhaust, shocks, axles, gearbox, tires - you name somewhere on the Viper you can slap a new part, and it's probably in this game. Choices are limited to your class, and by the time you get to GT Class the whole world of upgrades opens up to you.

But Viper Racing's low price and its lavish attention to modeling the Dodge Viper come at certain costs. Although the computer drivers are good, there are only seven to race against on eight tracks, and those tracks seem strangely barren and devoid of any signs of human life except for nondescript buildings (OK, the castle isn't nondescript). The Viper's the only car you can drive in career mode (I've got no problem with that), and no matter which of the other cars you choose for a quick race, the other guys will be in - you guessed it - Dodge Vipers.

But those are shortcomings, not flaws; when it comes to actual complaints about what's in Viper Racing, the biggest one I can come up with is that the sensation of speed is... well, screwy. You know the message on rearview mirrors that says "Objects are closer than they appear"? Viper Racing should have a similar warning, something like: "You're always going faster than it appears." As you slide out of control in a curve, you'll be wondering why it's happening when you're only going 60 or 70 - until a quick glance at the speedometer shows you're way over 100. This is a purely subjective gripe, of course, and after a while you'll undoubtedly develop an innate sense of how fast you're going in relation to the track. But it is something that might put impatient gamers off before they get a chance to discover how intense this game can be.

Viper Racing sports a full array of multiplayer options (modem, serial, LAN, and TCP/IP for Internet play), but just as with Grand Prix Legends, Sierra has tossed a potentially great multiplayer game on the market with zero support to help owners set up races. Serious racers will find a few Viper Racing leagues to join, but those of us looking for some quick racing without the commitment that goes along with league play are out of luck. Here's hoping Viper Racing makes it onto WON or the Internet Gaming Zone soon.

Probably the worst thing you can say about Viper Racing is that it's pretty limited in its scope - but you could just as easily turn that around and say that the developer focused on a few things so it could make sure they were all done very, very well. All I know is that it sure hooked me. 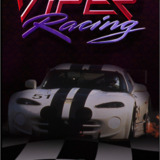