Valkyrie Profile: Lenneth is a solid port of a one-of-a-kind role-playing game that is endlessly appealing to genre fans who are looking for something different, but it's a bit too dense for everyone else.

Very few people have played the original Valkyrie Profile, but those who have are usually quite vocal about their love of it. Then there are collectors who regularly buy and sell used copies of the game for $100 or more. The good news is that now you can experience Valkyrie Profile without paying some greedy collector a ludicrous price for a beat-up old game. Valkyrie Profile: Lenneth is a PlayStation Portable port of the original PlayStation game, with the only new content being a few prerendered cutscenes. It isn't a perfect port, but most importantly, the unique gameplay and interesting story are just as compelling today as they were six years ago when the game was first released. Be warned, though: The lengthy story sequences and poor explanation of the unintuitive game mechanics mean that this game requires a lot of patience to enjoy, which at times makes it seem like an unfit choice for the portable format.

Valkyrie Profile has one of the most intriguing stories you'll find in a role-playing game. Lenneth, the main character, is a Valkyrie who serves the god Odin, ruler of the heavens. There are two realms in the game: Midgard, the land of the mortals, and Asgard, the land of the gods. The realm of Asgard is locked in a fatal struggle known as the Sacred War. It's Lenneth's job as a Valkyrie to visit the world of Midgard to collect the souls of brave humans and then send them up to Asgard to serve in the Sacred War. The final battle that will decide the fate of the gods is imminent, though, so Lenneth has to be quick about building up an army of harvested souls to be prepared for the ultimate confrontation.

Since you have to work within a time constraint, you have to be careful how you spend your time in Midgard. Everything you do, from resting to visiting towns and dungeons, takes a certain number of periods to complete, and there are eight chapters in all. If you want to, you can simply spend all eight chapters resting, but doing so will leave you unprepared for the final battle, and you won't be able to complete the game. To actually beat the game, you'll need to recruit souls, train them to increase their hero rankings, and then send them to Asgard. To do this, you can press the start button on the world map to concentrate and listen for the cries of brave souls in their final moments. Doing so will point you to a place on the map that you can then visit to see a lengthy scene involving the tragic death of some poor sap, after which that person will join your party. Sometimes you'll be sent to a dungeon that you have to clear to level up your party and collect artifacts to send back to Odin. You aren't forced to do anything though. There are more than 15 characters you can recruit in the game, but you can get by with far fewer than that. If you want to ignore the guidance of the game and explore the world on your own you can, although you'll end up wasting a lot of time, which could prove costly at the end of the game.

The dungeons in Valkyrie Profile are relatively short and vary in difficulty depending on how you have your party set up. The dungeons play out like levels of a side-scrolling platformer. You control Lenneth, and you can jump from platform to platform, find and open treasure chests, and shoot ice crystals, which can be used as makeshift platforms. The platforming in Valkyrie Profile feels awkward at best. Running around is fine, but when you have to hop between platforms or use ice crystals to work your way up a wall, the controls don't feel in tune with the actions you want to perform. It also doesn't make much sense, because when you're on the world map, you can fly around at your leisure, but in dungeons, you're relegated to hopping about on blocks of ice.

Of course, no dungeon is complete without dozens of enemies crawling around. If you touch one of the creatures, you'll be drawn into battle. You can take up to four characters into battle, each one assigned to one of the four face buttons on the PSP. To attack, you simply press the corresponding button of the character that you want attacking. By timing your button presses correctly, you can pull off combos, which fills up a gauge at the bottom of the screen. When that gauge is full, you can perform a Purify Weird Soul attack, which is an over-the-top special move that inflicts major damage. You can also use magic and items by pressing the select button during battle, which is a bit awkward, but it doesn't come into play often because you'll mostly rely on combo attacks to do your damage.

As with most role-playing games, Valkyrie Profile: Lenneth requires you to spend a lot of time managing your party of characters. You'll always have Lenneth and at least one warrior to fight with, but the goal is to send your best allies to Asgard, which means you'll be leaving yourself with a relatively weak party to fight with in the mortal world. Of course, you can keep your best fighters to yourself, but to get the better of the different endings, you'll want to make sure to keep Odin's army supplied with plenty of strong souls. As you fight and clear dungeons, you'll earn experience points, which are collected in a community fund that you can then dole out to your party members as you see fit. Your characters also earn capacity points as they fight, which can be used to learn new skills or bolster specific traits that will increase their overall hero ratings and let them be transferred to Asgard.

Valkyrie Profile certainly has an interesting take on the standard character-recruitment and party-management concepts you'll find in most role-playing games, but the game does a poor job of presenting these mechanics to newcomers. You're offered little guidance when it comes to managing your time and properly developing your characters, which are two of the most critical aspects of the game. The manual doesn't provide much information either. As a result, if you're without the benefit of outside help, you could end up missing out on a significant portion of the game on your first trip through.

Once you get the mechanics down, you'll find a lot of replay value in Valkyrie Profile. There are three different difficulty settings to start off with, and each one takes you on a different path through the game. There are some characters that you can't recruit unless you're playing the game on hard mode, and one of the endings is only available if you play on normal difficulty or higher. Combined with the open-ended design of the game, this means that you could play the game several times, with different results each time. Considering that it could easily take you 20 or more hours to play through the game just once, you can be sure that Valkyrie Profile will keep you busy for a long time.

Part of the length in Valkyrie Profile comes from the very long, and very slow, story sequences that you see each time a new character is introduced. The opening scene alone takes the better part of an hour to get through. As entertaining as it is to watch these characters die in horribly tragic ways, it gets a bit tiresome after awhile. The dialogue is all very dour and heavy-handed, with long-winded discussions of death, destiny, honor, and so on. The portion of the story that survived translation is fairly interesting, but it moves painfully slow at times. Most of the story sequences are silent, but occasionally you'll hear a bit of spoken dialogue. Some of the voices are appropriately angry or fearsome, but many of the other voices just sound fake and overly dramatic.

Part of the appeal of the original Valkyrie Profile is the gorgeously detailed, hand-drawn artwork. The game looks just about as good as it did on the original PlayStation, although some of the sprites look slightly blurry on the PSP. There's still a great level of detail in the characters, backgrounds, and animations here, especially in some of the elaborate special attacks. The fantastic music sounds excellent on the PSP, especially if you're listening with a decent pair of headphones. From the delicate melodies that accompany the screams of people in agony to the triumphant battle theme, the music is one of the highlights of this game.

While the game itself remains basically unchanged from the original, this isn't quite a perfect port. One of the more noticeable degradations is in the load times that accompany accessing the menu screen. You'll hear the PSP read the disc every time you want to view your inventory or equip your characters, and it always takes a few seconds for the menu screen to appear. It's a manageable shortcoming, but in a game where you spend so much time accessing the menu, it can get annoying. There are also some moments of slowdown that occur when you're running around in dungeons or performing special attacks during battle. They aren't sustained for more than a few seconds at a time, but they're still very noticeable. The only major intentional change from the original game is the introduction of some prerendered cutscenes throughout the game. Some of the scenes look great, but some look a bit ridiculous, and the contrast between the hand-drawn 2D art and rendered cinematics can be a bit off-putting at first.

Valkyrie Profile: Lenneth is certainly unique in the world of role-playing games. The only problem is that it takes a lot of patience and effort to truly appreciate what the game has to offer. With lengthy story sequences, few save points, and a steep learning curve, this isn't exactly a great on-the-go game that you can play for 5 or 10 minutes at a time. But if you're looking for a different role-playing experience, and you don't mind a game that takes itself very seriously, you'll get your money's worth from Valkyrie Profile. 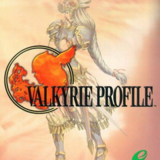 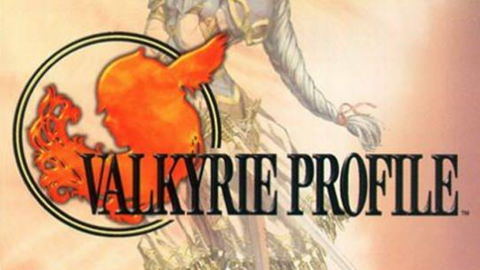 Valkyrie Profile is a complex, ambitious, and gorgeous title that offers much to like: beautiful aesthetics, an entertaining battle system, engaging characters, and a creatively balanced "dual" scenario.