It's a by-the-numbers hack-and-slash without much personality.

It seems somewhat curious that Sony Online Entertainment, the company that popularized the term "massively multiplayer" with EverQuest, would not capitalize on the fairly rich universe that's grown from its seminal online role-playing game for its first game for the PSP, a hack-and-slash RPG called Untold Legends: Brotherhood of the Blade. Unlike the EverQuest-derived Champions of Norrath games, which serve as the template for Untold Legends, this game features a whole new high-fantasy universe, albeit one recycled almost entirely out of rather generic Dungeons & Dragons parts. It has the right idea, which is basically the same idea that made the analogous Baldur's Gate: Dark Alliance and Champions of Norrath so enjoyable, but there's not much enthusiasm in Untold Legends. This leaves a game that, while hitting most of the necessary bullet points, is just going through the motions.

The lineage that birthed Untold Legends is pretty clear. From Diablo to Baldur's Gate: Dark Alliance to Champions of Norrath, this is a hack-and-slash RPG that follows closely in the footsteps of its predecessors. You'll choose your character from a small pool of magic users and fighters, and your choice here will determine what types of equipment you'll be able to use, whether you'll focus on ranged attacks or up-close melee attacks, and whether you'll depend on "power" (more traditionally referred to as mana). All the combat happens in real time, which works well enough for the most part, though certain choices made in compacting the established control template onto the PSP--specifically, demanding that you hold both the right trigger and the circle button to block attacks--are a little clumsy.

There's some kind of plot at work here, which starts typically enough with a simple spider infestation and slowly spirals into more global concerns. The story doesn't carry much punch, mostly because the whole thing is awfully generic. Most RPGs make the story the focal point of their energies, but it's just hard to care about the characters or their motivations in Untold Legends. The lack of voice acting and the otherwise flat writing are probably also partially to blame. And then you're off on a long series of quests, the lion's share of which require you to both hack and slash your way through randomly generated dungeons filled with monsters, the undead, and just plain unfriendly human folk before reaching some kind of boss character or collecting a valuable item for another character or some such thing. The quests do actually become a bit more involved over time, but that's the gist of it. Of course, along the way, your character will become more powerful, and you'll find, earn, and purchase new gear, as well as enhance your gear with small trinkets. You'll also gain new special abilities.

The dungeons in Untold Legends are randomly generated, with the thinking being that you can play through the game several times without seeing the same dungeon layout twice. The folly in this train of thought is twofold. Because the dungeons are randomly generated, they look like they're randomly generated. There's no rhyme or reason to the floor plans, which means there's no purposefully strategic designs to add a little tactical variety to the action. Secondly, monster placement is also random, and it often seems like you'll for long stretches without anyone bothering you, only to be overwhelmed by a clot of poorly placed monsters.

If you find the dungeon crawl to be a bit lonesome, you can join up with three other players for some cooperative dungeon crawling, which is inherently pretty fun thanks to the camaraderie of multiplayer gaming. The co-op is pretty dynamic, allowing other players to jump into your single-player game or to start a fresh adventure. The game is smart enough to set rules concerning the dividing of riches, to help prevent too much squabbling over who's hoarding all the gold. Items will go to whoever picks them up first, though a simple trading interface makes it possible for players to swap swag. Though Internet play would've been really nice, the co-op mode still serves as one of Untold Legends' bigger selling points.

If this package sounds a bit too familiar...well, it is. That the structure is completely boilerplate isn't inherently a bad thing. After all, the games Untold Legends steals from are quite revered. But while those games presented themselves with a certain amount of charm and energy, Untold Legends has a kind of bland feel to it, especially when it comes to the presentation. The environments, while varied, are nothing special and could've been ripped out of countless other high-fantasy games. The characters are similarly archetypal and devoid of personality. The game is also a little shaky on a technical level. Loading times between areas are pronounced (lasting upwards of 30 seconds), texture flicker and aliasing are regular problems, and the frame rate bogs down when there are more than three or four enemies onscreen. As far as the sound is concerned, the din of battle is suitable enough, if a bit repetitious, but the cheap-sounding synthesized score knocks the whole aural presentation down a notch.

There's an assembly line vibe that plagues Untold Legends: Brotherhood of the Blade. Sony Online Entertainment had the distinct opportunity here to bring its Champions of Norrath series, and by extension, EverQuest itself, to the PSP, but instead it delivers a by-the-numbers hack-and-slash without much personality. It's somewhat apparent why no one bothered to tell this legend until now.

View Comments (0)
Back To Top
6.9
Fair
About GameSpot Reviews 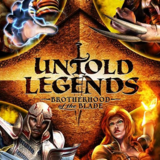