In the 1950s, alien-invasion paranoia reached a fever pitch. Films like the 1953 version of War of the Worlds and 1956's Earth vs. the Flying Saucers pitted humankind against seemingly unstoppable alien onslaughts. The new tower defense game Unstoppable Gorg transports you back to this golden age of alien-related anxiety, putting you in control of orbital defenses as UFO armadas and other extraterrestrial attackers attempt to wipe humanity from existence. Unstoppable Gorg is both an entertaining tribute to the alien-invasion movies of days gone by and an enjoyable tower defense game that requires you to think on your feet to survive.

Somewhere beyond Neptune, an exploratory satellite discovers Planet X, the home of an advanced alien civilization known as the Gorg. Humanity's overtures of goodwill are spurned by the evil Gorg, and the people of Earth are suddenly fighting for survival against an overwhelming alien attack. The black-and-white newsreel-style cutscenes that advance the story make effective use of a combination of archival footage and deliberately chintzy special effects; rocket ships are visibly borne aloft by strings, and the costume worn by the actor portraying King Gorg looks like something out of an Ed Wood film. But it's not just the Gorg you fight. As you advance through the story's 21 missions, humanity runs afoul of an alien seductress and her hideous brain riders, as well as a clunky robot and his mechanical minions. These adversaries perfectly capture the charms of the sci-fi films and television shows of the '50s, and the care and reverence with which the whole thing is constructed make the B-movie story worth seeing through to the end.

Like so many tower defense games, Unstoppable Gorg is conceptually simple but challenging in practice. In each mission, your primary goal is to protect something--whether it's an asteroid mine, a luxury hotel hovering near the moon, or the Earth itself--from destructive alien forces. This central object is surrounded by orbital rings, and there are a few points on each of these rings on which you can place satellites. Different satellites serve different purposes. Some attack enemies with bullets, lasers, rockets, or other weaponry; some generate money that you can use to build more satellites; and some support your other satellites by shielding them, repairing them, improving their range, or bestowing other benefits. Before each battle, you can see the types of enemies you're about to face, and you have to decide which satellite types you want at your disposal and which to leave behind.

This is all typical tower defense stuff; weighing your options before battle is an engaging tactical decision, but it doesn't set Unstoppable Gorg apart from the glut of other games in the genre. What does set Unstoppable Gorg apart is the way that you can manipulate the orbital rings during battle. As rows of sleek saucers, flying brains, or other assailants make their circuitous way to the level's center, you can grab orbital rings with your cursor and wheel them around, which allows you to track nearby enemies with your attack satellites or move your more vulnerable satellites out of danger.

Of course, moving one satellite into a better position often moves another satellite on that same ring into a more dangerous one, and it's this on-the-fly evaluation and decision making that make fending off the alien attackers an engaging and suspenseful pursuit. There's a bit of trial and error involved in triumphing over your enemies; sometimes you may find that your satellite selection or placement just isn't up to the task, and the destruction of the Earth (or whatever you're protecting) sends you back to the drawing board. Unstoppable Gorg eases you into things, but even on the easy difficulty option, it eventually gets quite tough. Defeat can be frustrating, but you can learn from your failures and use that knowledge to formulate a new approach, and those defeats only make your eventual, hard-earned victory all the sweeter.

In addition to introducing new satellite types and new enemies as you advance, Unstoppable Gorg's campaign frequently puts you in situations that change up the gameplay. You might have to worry about asteroids as well as enemies, and quickly swing satellites into position to take out rocks that are on a speedy collision course with the vital object at the level's center. Or you might be surrounded by so much space dust that your money-generating satellites can't harness the sun's energy and do their work, which forces you to make do with the credits you start with and what little you earn from destroying enemies. Or enemies may use their psychic powers to lock most of your orbits in place, severely limiting your ability to respond to dangers on the fly. This variety of situations means you never know quite what to expect from the next mission, which keeps the campaign fresh from beginning to end.

That campaign doesn't last terribly long, with its 21 missions typically taking about six or seven minutes to complete. But you'll likely need to attempt many of those missions multiple times just to survive, and you may want to repeat some missions to complete optional goals, like earning research tokens which give you the ability to spend money to upgrade certain satellites on later missions. There's also Arcade mode in which you try to last as long as possible against increasingly more powerful waves of enemies. And unlockable challenges introduce new conditions to the campaign levels that make them more difficult, like faster enemies or a central habitat that can be destroyed with one hit.

It's unfortunate that Unstoppable Gorg doesn't find a way to turn its exciting variation on tower defense gameplay into a competitive or cooperative multiplayer mode, but you get a reasonable amount of game for your $9.99. This endearing tribute to the future of the past is a rewarding game that challenges your wits and your reflexes. Despite the game's title, you can stop the Gorg; and although it isn't easy, it's certainly worth doing. 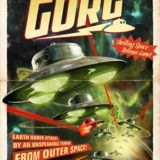