The strings that tie to you.

With its warm, rustic setting, and an instantly endearing protagonist, the first Unravel had the outward appearance of a happily nostalgic adventure. That initial fuzzy feeling, however, gave way to a series of frustrating puzzles and a story that took some unexpectedly dark turns. In the game's final hours, the poor little hero Yarny was left all alone in a hostile world. What a relief it is to see him in a better place in Unravel Two, the sequel that's notably comforting thanks to the introduction of a second yarnling. Once they meet, Yarny and his new friend immediately hit it off and set out on a new adventure.

Similar to the original game, Unravel Two has ethereal slice-of-life scenes that play out in the background of each stage. This time, the literal background story involves two youths making the drastic decision to run away from their hyper-religious families. Yarny and his new partner make their own journey through the small town they live in, inadvertently helping the kids along the way with each new platforming challenge they surmount. Despite trips to more urban settings, the design philosophy and earthy aesthetic that made the first game such a visual treat haven't been abandoned. Aside from some mild industrial chaos--traipsing around construction sites, messing with the ventilation systems in a factory, and the like--much of what you experience is delightfully serene.

Once again, we witness the world from Yarny's tiny perspective. You run through misty city streets at night under haloed streetlights. You push toy trucks around backyards on sunny days before riding off into the blue yonder on the back of a swan. You jump across rooftops at midnight, a skeleton city of antennas and vents where only the pigeons are awake. One of the most beautiful areas of the game has Yarny making his way along a stream of rushing water in a creek, letting the tide build up the momentum you need to get a full head of speed up for a jump. There's still such a sense of awe to how tangible and real Yarny's world is, but it never feels like a place where Yarny is in peril. Though it takes place in more challenging environments, it's a world where what little danger there is feels magical, and Yarny has never been able to move through it in as invigorating a way as he can with a partner in Unravel Two.

The swing mechanic--where Yarny can latch yarn onto a grapple point and either rappel up and down or swing to launch himself onto a higher point--has returned, but with a newfound kineticism. Many stages push you to swing across multiple wide chasms and tight gaps in quick succession, and soaring and flipping through these trials is always a thrill.

There will come times when you have to stop and figure out a way past complicated obstacles, and this is where Unravel Two's co-op nature shines. Obviously, the ideal way to manage two characters is to have a friend sitting next to you on the couch, controlling Yarny's new ally while you plot solutions. But even a single player can make use of both characters, switching back and forth between the two onscreen with the push of a button. When playing solo, the character you leave behind will continue to hold onto whatever they were holding, meaning you can always place your partner wherever you need them. You can even carry your partner through danger by absorbing them into your own yarn body--mildly disturbing but helpful nonetheless.

With its charming yarnlings and a newfound style of platforming, Unravel Two remains welcoming even at its most foreboding.

With the two Yarnys tethered together, most puzzles are resolved by forming makeshift pulleys that allow you to create opportunities the environment wouldn't normally afford a single Yarny. Puzzles are typically open-ended and can be solved in a handful of ways. The only real barrier, besides pure logic, can be the game's control scheme. The same button used to jump is used to extend the tether between the two Yarnys, and it's fairly easy to accidentally send your partner plummeting to their doom. Unravel Two is undoubtedly a more welcoming and accessible game than its predecessor, but there are still demanding trials for those who want them, especially with around two dozen extra-challenging stages that are available.

With its charming yarnlings and a newfound style of platforming, Unravel Two remains welcoming even at its most foreboding. Sure, a forest fire breaks out in one of the latter stages, but even then, the race to keep ahead of the blaze is fun and frantic instead of stressful. In almost every moment you're given ample time and space to breathe and take in the stunning photorealistic world from the viewpoint of the tiniest creatures. It's a game with boisterous birds, chases through meadows, and most importantly a cheerful partnership with a companion who's always got your back. With only six chapters that run roughly 30 minutes apiece, Unravel Two doesn't last long, but it's a game where the time you have is meaningful, memorable, and downright pleasant from beginning to end. 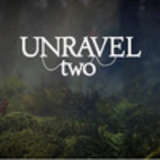 Justin Clark spent about 5 hours completing Unravel Two and half of its optional challenges. Review code was provided by EA.