The game is too frustrating and convoluted for kids to have any fun with it, and all but the most desperate adult GameCube fans will find it tedious and unentertaining as well.

Nintendo has always projected a kid-oriented image, and with games like Universal Studios Theme Park Adventure being released for its systems, it's not hard to see why. Universal Studios casts you in the role of a nameless, childish protagonist and sets you off at the gates of the famous theme park for a day of exploration. Unfortunately, the game is too frustrating and convoluted for kids to have any fun with it, and all but the most desperate adult GameCube fans will find it tedious and unentertaining as well.

Universal Studios is an odd game; in fact, it's really a mishmash of various minigames that extend from a hub, which is the park itself. Each minigame is based on one of the more conspicuous rides at the real-life park, such as Back to the Future, Jurassic Park, and Jaws. You guide your character through the park, seeking each ride so you can play the minigame based on it. Upon reaching a ride, however, you'll discover the game's first disappointing "feature"--the lines at the rides are so long that you can't get in. You would expect an amusement park video game to circumvent the inconveniences of a real amusement park, such as long lines, but not here.

Once you discover the inaccessibility of the rides, you're confronted with the next of the game's annoyances, the point system. Gather points around the park by completing various menial tasks, and you'll eventually be able to buy a number of bonus hats that let you access the rides. These tasks include shaking hands with park mascots and picking up garbage and depositing it in trash cans. After you've bought some hats, successfully completing each minigame also earns you points, and after you've bought all the hats, there are a couple of extra items that you can continue to work toward. Additionally, completing each minigame earns you a stamp on your stamp card, and when you've collected all eight stamps you can view a bland FMV "magic show," and then, presto, you've finished the game.

None of the minigames in Universal Studios are strong enough to stand on their own, and even taken as a whole, they make for some thin, repetitive gameplay. The Back to the Future game, for instance, simply has you racing one DeLorean against another, smashing into the car enough times to disable it. Successful completion time for this game is no more than two or three minutes. In the E. T. game, you control Elliott's bike through a side-scrolling course as he attempts to get E. T. back to his ship. Again, the game is incredibly short, and it's not even very entertaining the first time, much less through subsequent replays. Backdraft sees you donning a fire helmet and entering a burning building with your fire hose and a will to save lives. This is the lengthiest and probably most amusing of the games, but even it begins to wear thin before you reach the end of its 10-minute duration.

The other games are similarly mind-numbing. Jaws has you protecting the Orca from the killer shark by smacking the shark in the nose with barrels. In Jurassic Park, you take control of a turret on the back of a jeep and shoot at dinosaurs for a few minutes. A Wild West stage has you competing against outlaws for expert marksman status. Waterworld isn't even a game at all--you simply watch a brief CG re-creation of the movie's ending from several angles and then receive some points. The final two stamps on your card are achieved by winning a trivia contest and collecting hidden letters around the park to spell out "Universal Studios."

Universal Studios Theme Park Adventure is fraught with a variety of minor annoyances to complement the boring gameplay. For one, the graphics are hardly befitting a machine of the GameCube's abilities. Also, navigating the park is almost laughably difficult, and the park map, which isn't even provided at the outset, is no help. Even the poorly reproduced voice of your guide, Woody Woodpecker, will begin to grate after about three words are spoken. Combine all these problems into a package whose playtime isn't much longer than one or two sittings, and the result is a filler release with even dubious rental potential. 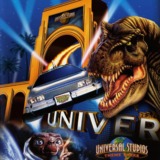 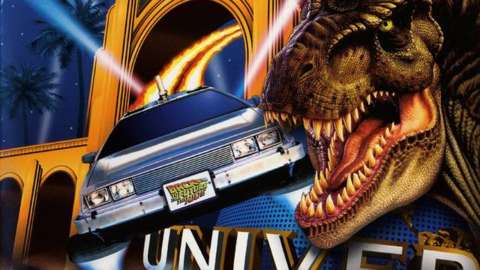 The game is too frustrating and convoluted for kids to have any fun with it, and all but the most desperate adult GameCube fans will find it tedious and unentertaining as well.