With their bite-sized chunks of nostalgic NES challenges, the NES Remix games always seemed better suited to quick blasts on a 3DS rather than extended sessions in front of a Wii U. Perhaps that's why, despite Ultimate NES Remix being a simple compilation of its two couch-bound predecessors, it's so darn appealing.

Of course, much of that appeal comes down to just how invested you are in the Nintendo universe. NES Remix is all about nostalgia, from the 8-bit-inspired music and menus, to the classic cuts of games that make up its many challenges. Like the games that inspired them, the remixed challenges play to the old-school mechanics of score chasing and speed, focusing on dexterity and concentration over more modern conceits like accessibility and story. That's not to say knowing how to make Mario jump over a set of obstacles is particularly challenging, but doing so against the clock when the obstacles suddenly turn invisible most certainly is.

For score chasers and difficulty aficionados, NES Remix proves to be an entertaining experience. Remixed games are divided into several challenges, each of which awards you with a star rating, depending on how long it takes you to complete it. As someone who can't leave well enough alone, the sight of those one- and two-star completions nestled among the shiny threes is enough drive me loopy; when the completist drive kicks in, it's very hard to stop.

The Mario challenges prove to be the most fun, which should come as no surprise given the brilliance of the games they're based on. There's little adaptation needed to fit Mario into bite-sized chunks, with speed runs, coin collecting, and defeating classic Bowser bosses making up a good portion of the challenges. There are some neat twists on the formula where Mario is invincible for the entire level, or where multiple 1-Up mushrooms are hidden on screen for you to discover. The Remix versions take things further, blacking out sections of a level, adding distracting clones, and replacing characters with those from Mario sequels.

Speaking of which, both the cruelly underrated US version of Super Mario Bros. 2 (the infamous port of Doki Doki Panic) and the Japanese version make appearances, although it's the former that features some of the most memorable challenges. The wacky handling of characters like the disturbingly floaty Princess Peach is used to great effect, particularly when those characters are transported to other versions of Mario games, in which the airy handling makes for some particularly challenging jumps across platforms not designed for them.

Other highlights include Little Mac's career from Punch Out!!, which is as much a puzzle game as it is a fighter. Nailing those tricky dodges by looking at the tells of your opponent is as cruel and as tense as ever, making victory against those muscled titans oh so satisfying. Kirby's remixed levels are similarly great, with one standout placing the ghosts of Mario onto a boss level, requiring you to quickly turn around to stop their progress while simultaneously trying to suck down fruit to fire back at the boss.

The whole lineup works wonderfully as a nostalgic tour of Nintendo's impressive back catalogue, or as a history lesson to those not old enough to remember them the first time around. Zelda, Donkey Kong, Metroid, Kid Icarus: these are the series that introduced an entire generation to video games, and age has done little to sour their excellence. Only lesser-known titles--the likes of Balloon Fight and Excitebike--fail to hit the mark, but maybe that's as much down to them not being a part of my childhood as it is down to the mundane challenges within.

Aside from the challenges, Championship Mode from NES Remix 2 returns, giving you the chance to play through three quick-fire sections of Super Mario Bros., Super Mario Bros. 3, and Dr. Mario, with an accumulated score awarded at the end. A new addition comes in the form of Speed Mario Bros., which, as the name suggests, is the entirety of Super Mario Bros., but significantly sped up. Suffice to say, it is very difficult, but skilled players will be able to perform some seriously impressive speed runs with it.

There's enough variety and challenge on offer in Ultimate NES Remix, not to mention some powerful nostalgia, to keep you glued to the screen for longer than you think 30-second challenges ever could. Sure, if you own older versions of the game, there's nothing new here for you to see, but NES Remix's new home on the 3DS makes so much sense that you might be inspired to go back and attempt those challenges again. 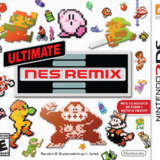 Mark's first console was a NES, which came boxed with a copy of Super Mario Bros. It was the best Christmas ever. He's managed to three star his way through most of NES Remix's challenges, but remains confused by Balloon Fight.