Ultimate MK is a sharp fighting game that's still a lot of fun, but only against live opponents.

Fighting on the Nintendo DS goes online courtesy of Ultimate Mortal Kombat, a two-game compilation that contains a quality port of Ultimate Mortal Kombat 3 and a version of Puzzle Kombat, the MK-themed puzzle game that Midway inserted as an extra in Mortal Kombat: Deception. By itself, as a single-player game, it's a bit of a dud. But if you're a fighting aficionado with a DS and wireless access to the Internet, this is a pretty cool package.

Ultimate Mortal Kombat 3 was the last 2D game in the MK series and, by far, the fastest of the bunch. It added a run button that the previous games didn't have, amped up the combo system, and added a lot of interesting new characters, all while maintaining the game's digital, photographic look. The finishing moves got more ridiculous, too, with animalities--where your fighter turns into some kind of animal and does something to your opponent--joining the regular fatalities, babalities, and friendships. But even the regular fatalities became crazier. For example, Liu Kang can make an MK2 arcade machine drop out of the sky to crush his victim. It wasn't as serious as the Mortal Kombat games that came before it, and it's certainly not as serious as the darker set of MK games that appeared on the previous generation of consoles. It's goofy, but it's also one of the better 2D fighters from its era. It controls just fine on the DS, and it's still a lot of fun.

There's a catch, though. The Mortal Kombat series has been saddled with some of the worst computer-controlled fighters in the history of the genre. Although the first three fights are easy, afterward the artificial intelligence shifts into "win" gear, where it just reacts to every single little thing you do. It's not a fair fight, and it's not a fun fight. The only realistic way to win is to exploit its reactive nature and trick it, which isn't too hard. On the other hand, it also isn't any fun. If you want to enjoy Ultimate Mortal Kombat, be prepared to play it against someone else.

You can play multiplayer against another person using only one copy of the game, but you'll be limited to a couple of characters, so this isn't really viable for long-term excitement. Locally, you'll need two copies of the game to play it right, or you can connect to the Internet and seek out competition online. The online mode works surprisingly well, and in most cases, our matches against other humans were free from noticeable latency. However, the occasional match was sluggish and choppy, so as with most things involving an Internet connection, your mileage may vary. The game keeps track of your rating, which is a score based on your wins and losses. You can match up against friends using the standard friend-code system, or jump in against random players. All of this stuff also applies to Puzzle Kombat.

Puzzle Kombat is a blocks-and-crash-gems style of puzzle game. It's effectively a rip-off of Super Puzzle Fighter II Turbo, but with Mortal Kombat combatants instead of Street Fighter characters. Each character can pull out a different special move by filling up a meter. These moves include the ability to jumble up your opponent's pit, to remove blocks from your own, and so on. It's a functional but unexciting puzzle game that made for a cute bonus back in Mortal Kombat: Deception, where it was one part of a game with many modes. Here, where it gets equal billing with UMK3, it comes across as a little stale.

Graphically, the games look just fine. UMK3 looks like the arcade version but smaller. As a result, the characters are somewhat less detailed than they were in the arcades. For example, you won't really be able to see the look on Stryker's face as he straps dynamite to his foe and then plugs his ears for the blast. Also, there are a handful of pauses and black frames that pop up when you perform fatalities, change background stages by uppercutting your enemy through the ceiling, or do anything else that forces the game to quickly load some new graphics from the cart. The game uses the inactive screen to show you your fighter's special moves, which is useful if you don't already have them memorized. The music is sharp, and the sound effects are good as well.

If you're a DS-owning Mortal Kombat fan, this is a great offering that's certainly worth owning, but only if you're properly equipped to take your DS online. You probably won't want to play alone for more than 15 minutes, so be sure to take that into account before you buy. 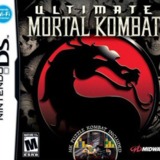 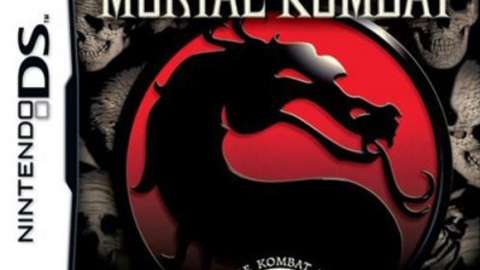