Ultimate Marvel vs. Capcom 3 makes a smooth transition to the PlayStation Vita, keeping its fast-paced combat intact and adding some new features.

Ultimate Marvel vs. Capcom 3 is going mobile. The PlayStation Vita version of this chaotic, 2D fighter features everything you'd expect from the console version, along with some welcome additions. These include replay support for online matches, as well as support for Heroes and Heralds mode right out of the gate. The Vita's direction pad, thumbstick, and face buttons all work well for a fighting game, and there's even touch-screen support. Of course, UMVC3 is just as challenging as before and can break your heart with a single combo. It's mean, it's flashy, but most importantly, it's Marvel, baby!

This version of UMVC3 runs just as smoothly as its console counterpart. The only sluggishness occurs when performing hypercombos, but it is minor enough to be negligible. All of the fighters are rendered in full detail and beautifully shown on the small screen. Of course, some concession had to be made when working on less-powerful hardware. This means all the special effects--fireballs, impact flashes, and the like--have been knocked down to a lower resolution.

The Vita's front touch screen can also be used in single-player or multiplayer. Movement is performed by swiping in a direction, while tapping the screens makes your character attack, usually with a basic combo that ends with an ultra. It's little more than a gimmick and can be filtered out when searching for online opponents.

The 12 new fighters from the console version are all included, and many of them personify the game's shift in focus between MVC3 and Ultimate. Together with the original cast, they raise the total to an impressive 48 fighters. Players who prefer to rush in aggressively will find Wesker's moveset to their liking, while those who relish keeping foes at a distance will appreciate Hawkeye and Ghost Rider. Additional tweaks to the fighting mechanics, such as scaling back X-factor and beefing up team aerial combos, carry over into this version as well.

You're not on your own to discover these changes. Mission mode, which teaches players basic techniques for the cast, has been updated to accommodate all of these tweaks. The 12 new characters have their own mission sets, while the missions for veterans have been updated. Unfortunately, this mode has issues in the way it presents information, so if you don't know your gram from your ragtime shot, then you constantly have to pause the game and dive into the menu to see the move's input. Being able to watch a demonstration of the current mission would also have been appreciated.

The Shadow Mode downloadable content from MVC3 is altogether absent. Its replacement is Heroes and Heralds mode. Heroes and Heralds has you collecting cards and assigning them to your three-person team to unlock new bonuses and abilities. The steady trickle of new cards, as well as the new abilities they confer, make this an addictive addition. But with so many radically different card abilities, it can be confusing to go up against enemy teams if you don't have all of the cards memorized.

One feature that fans were dying for in the original Marvel vs. Capcom 3 that made it into Ultimate is a spectator mode during online play. No longer are you confined to watching two sets of life bars tick down while awaiting your turn; now, you can see all of the action for yourself. Replay support is also included in the Vita version. From a replay-specific leaderboard, you can sort through replays based on region and even save them to your Vita's memory. When viewing replays, you can scroll through the action frame by frame, show input data, and even pull up an overlay that shows character hit boxes.

During our play sessions, online play did have some hiccups. Part of this was the aforementioned slowdown during hypercombos, but at other times, it was simply lag. Few games went by completely free of lag; however, what lag we did encounter was brief and didn't significantly detract from the experience. And just like on consoles, Ultimate Marvel vs. Capcom 3 for the Vita may feel inviting at first, but when you sink a little deeper, you discover a game in which victory and defeat hinge on a fine line. It's a high-risk, high-reward system that buries you in a brightly colored light show at the slightest misstep. This game makes a graceful transition to the handheld space while retaining everything from the console version. 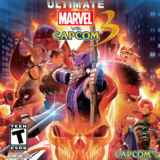