Ultimate Ghosts 'n Goblins is a great-looking update of a classic platformer, but it can be frustratingly difficult to a fault.

Capcom aims squarely for whatever bundle of nerves it is that governs one's nostalgia for days gone by with Ultimate Ghosts 'n Goblins, and it's a pretty good shot. The formula of leaping around in either a suit of armor or your skivvies as you fight the undead remains intact, and it is expanded upon in a few meaningful ways. The presentation does an even-handed job of retaining the spirit of the original 2D Ghosts 'n Goblins while rendering the action with lots of colorful polygonal detail, and it's hard not to let yourself get worked up when you hear the lush renditions of the classic 8-bit music. It's mostly a sound 2D platformer, but some of the old-school gameplay holdovers hurt more than they help, and the game relies too heavily on repeatedly playing through the same levels to pad out its length.

The game sets things up with a couple of paragraphs of backstory, though it would've been as effective if it just said "fight evil, save the princess." There's no kind of plot development beyond the game's opening, and there doesn't need to be. As Arthur, you must fight through six unique levels built around lots of perilous platforming, each staffed with a wide variety of the undead, the demonic, and the just plain evil. Each level has a strikingly unique look to it, though they all have a certain haunted-house vibe. There's an undead-infested graveyard, a gothic castle with lots of stained glass, and several levels that don't give such a specific sense of place, but ooze and slither around you as though they were alive. Some of the level designs can be clever, and you'll be caught by surprise with disappearing platforms, crumbling staircases, and suddenly rising levels of unspeakable fluids, and each discrete area is punctuated with a respectably large, if predictable, boss fight. It's all put together skillfully, but the level designs don't color outside the lines established by previous platformers, and they're rarely as inventive as the 16-bit Ghouls 'n Ghosts games that precede it.

As is Ghosts 'n Goblins tradition, when you're initially dropped into this nightmarish ordeal, you're equipped with a suit of armor, the ability to jump, and an unlimited number of pointy lances to chuck at your enemies. Bumping into an enemy or getting hit by one of their projectiles will knock the armor clean off of Arthur's bony little frame, leaving him to leap about in nothing but his boxers, and receiving another bump in this state will reduce him to a pile of clattering bones. By the end of the first level, though, you'll find that there are multiple levels of armor to be had, making it possible to take more than just two hits before you go all skeletal. You'll also pick up a pair of boots that give you the ability to double-jump, a maneuver so indispensable you'll wish you had it from the get-go. There are also nearly a dozen different weapons to be picked up over the course of the game, including series standards like lances and daggers, as well as all-new weapons like whips and boomerang scythes. Each, of course, has its own set of pros and cons.

Ultimate Ghosts 'n Goblins introduces some new ideas for the series, such as shields, which you can use to block attacks by pressing down on the D pad. Some shields have ancillary effects as well, ranging from the ability to fly for short bursts to replenishing your stores of magical energy whenever you successfully block an attack. That magical energy comes into play when you pick up trinkets that are hidden throughout the game, each of which can grant you specific magical powers, such as the ability to slow down time, produce a massive wave of fire, or simply destroy any enemies that are too close for comfort. Arthur can also cling to and pull himself up onto ledges that he can't quite make a clean jump to, and all of these new abilities go a ways in injecting something fresh into what is otherwise a very familiar game.

If there's one thing about Ghosts 'n Goblins that people seem to recall, save for the whole underwear thing, it's that Ghosts 'n Goblins was tough, even by the unforgiving standards of the mid-1980s. Ultimate Ghosts 'n Goblins maintains that spirit well, throwing lots of enemies at you as you traverse tricky platform-jumps, though it's not nearly as unforgiving as its non-Ultimate namesake. Luckily, the game does offer three modes of difficulty. Novice and standard difficulties are similar, each giving you a decent number of extra lives, and both will continue right from where you left off, though the enemies are slower and softer on novice, and you also start off each life with a really juiced-up weapon. The difficulty in the ultimate difficulty level, though, is just about as cruel as a platformer can get. The enemies are fast, aggressive, and numerous, and rather than resurrecting you from where you left off, you start from the beginning of the level when you die.

Regardless of which difficulty level you play at, though, you're bound to find yourself faced with regular frustration. The most prominent irritant in Ultimate Ghosts 'n Goblins is the inability to affect Arthur's movement in midjump. It's something that you might take for granted in any other platformer, but without it you'll bump into enemies or fall down bottomless shafts, which all feels as if it should've been avoidable. It's possible to use the double-jump to pull a 180 on your current jump, but there's no finessing it after you've hit the X button, making the game's numerous blind jumps exasperating when they could've just been challenging. Some will excuse the rigid jump mechanic as being an added touch of old-school authenticity, but some traditions were dropped for good reason.

What's really disappointing about Ultimate Ghosts 'n Goblins, though, is how the game is structured. There are six main levels to get through, and on standard difficulty, it will probably take you less than three hours to get to the end of level five. However, this is the point at which the game decides to reveal the importance of the rare, hidden gold rings, which you might have picked up a couple of before reaching this point. If you don't have a certain number of these gold rings--a number that you probably won't have if you weren't going out of your way to hunt them down the first time around--you will find yourself back at the very beginning of the game. There are special warp staves that you can pick up that will let you hop to specific levels, but the inherent design of the game relies on you wanting to play through these five relatively brief levels multiple times. To their credit, the levels do change a little bit when revisited, and there are some neat hidden areas to be found; but it's not enough for you to care to go through them multiple times.

For those with a standing affection for the original, Ultimate Ghosts 'n Goblins is a fully capable update of the 20-year-old game. The 3D graphics enhance the 2D gameplay by giving the world a sense of depth without interfering with the gameplay, and the whole package simply glows with vibrant color and lighting effects. Its weaknesses, though, are undeniable, and the very familiarity that will draw some people to Ultimate Ghosts 'n Goblins will leave others cold. 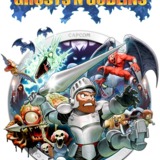