UFC 3 Review: A Tense, Exciting, And Dynamic Recreation Of MMA

EA Sports UFC 3 begins with a slick video package charting the meteoric rise to stardom of cover athlete Conor McGregor. The Notorious Irishman is the ideal poster boy for UFC 3's new G.O.A.T. Career Mode, as it focuses not just on your performances inside the octagon, but on your propensity for drumming up hype and promoting fights outside of it--something the high-powered southpaw has arguably mastered. McGregor's world class striking also serves as a perfect introduction to UFC 3's wince-inducing action, as you're thrust into a tutorialized fantasy matchup against interim lightweight champion Tony Ferguson.

UFC 3 hits the ground running with this match-that-could've-been, hastily showcasing a plethora of improvements to its stand-up game, from an impressive suite of fluid new animations to an intuitive new control scheme that emphasises maneuverability. Much like previous entries in the series, developer EA Canada continues to excel at stand and bang slugfests--as fists fly, skin lacerates, and the canvas adopts a crimson hue--but falters when the action is dragged down to the ground.

UFC 3's grappling remains unchanged from its predecessor--utilizing the right stick for transitioning into and out of various positions--and is too cumbersome and binary to ever be particularly enjoyable. Submissions fall into the same category, too. The default four-quadrant mini game feels disconnected from what's happening on screen, while a simplified alternative that consists of mindless button mashing also fails to capture the intricacies of these bone-breaking holds.

Fortunately, the stand-up game's redefined excellence does an admirable job of distracting from these flaws. Almost every aspect of UFC 3's striking has been completely redesigned, placing much more significance on movement, spacing, and momentum. With both fighters standing toe-to-toe, there's a palpable sense of weight to the way you move around the octagon, and a responsiveness to each blow and crucial head bob that allows you to act just as fast as you can think--reaction times notwithstanding.

The new control scheme does still require a certain degree of finger gymnastics in order to perform particular techniques, but by moving each offensive move to the face and shoulder buttons, the right stick is freed up to be used exclusively for ducking and weaving, while the left stick is dedicated entirely to movement, allowing you to throw strikes and move at the same time. This sounds like a simple change on the surface, but it's a crucial deviation that opens up myriad possibilities, and substantially increases the kinetic dynamism of each fight. Suddenly you can barrel forward like a freight train to apply pressure; retreat out of danger with defensive jabs to keep your opponent at bay; and laterally weave to a fighter's weak side while simultaneously throwing a dangerous uppercut to their unsuspecting jaw. It's a game changer, and beautifully complements UFC 3's newfound focus on momentum and the risk versus reward at play with each strike.

Being mindful of spacing becomes a key attribute as you look to get in and out of your opponent's striking range without sustaining damage. Stamina management also plays a crucial role, as repeated strikes lose power as your stamina fades to discourage aggressive players from their worst tendencies. You have to be smarter and more precise with each blow; reading your opponent's movement, using feints to throw off their timing, and slipping into counterattacks to punish any misguided swings. All of this results in a game that adopts a more measured pace than its predecessors, and should suit those who approach each fight with nuance and tactical astuteness.

Almost every aspect of UFC 3's striking has been completely redesigned, placing much more significance on movement, spacing, and momentum

Once you're comfortable in the octagon, the aforementioned G.O.A.T. Career Mode is on-hand to test you against the world's greatest fighters. With a few fights on the regional circuit under your belt, it doesn't take long until you impress Dana White enough to earn a UFC contract and can begin climbing up the ranks for a shot at a championship. It's a familiar setup, but one that differentiates from its contemporaries by embracing the promotional aspect of the sport and focusing on time management above all else. You start the run up to each fight by signing up to a gym that specialises in a specific fighting discipline, and can then choose to train and improve your attributes, learn new moves and perks, spar with a training partner who's emulating your upcoming opponent, or promote your next fight to drum up hype and attract more fans to your brand.

This balance between performance and promotion is an interesting concept, and it strips away a lot of the monotony these career modes often suffer from. Improving your attributes simply boils down to selecting which areas you want to develop, with each activity eating into that weeks designated time allotment. Promotion works much the same way as you're given the option to generate hype for your next fight by, say, predicting the finish on social media, attending autograph signings, or even taking a page out of Demetrious Johnson's book by streaming some video games. There are no tedious mini-games revolving around punching bags and speed balls, and those that are included are incredibly brief with immediate rewards in the shape of new moves and perks. The whole thing is so streamlined it's almost negligible, ensuring you spend less time staring at menus between each fight, which is a good thing.

The only time the Career Mode falters is when you make the leap from fighting created fighters to fighting real ones. Even if you dedicate yourself to improving your attributes at every possible opportunity--foregoing promotional activities in the process--your overall stats are going to be significantly lower than the world-renowned fighters you're going up against. Being challenged isn’t an inherently bad thing, but there are moments when this sudden difficulty spike feels genuinely unfair. Whether you’re struggling to break through what seems like an impenetrable defence, or tapping out to yet another overpowered submission, despite your fighter having maxed out submission defence. This puts a dampener on what is otherwise an enjoyable mode.

Elsewhere, Ultimate Team returns and continues to be a curious addition to the world of mixed martial arts. With one-on-one fights on the agenda, UFC 3's particular flavour of Ultimate Team lacks the appeal of concocting your own unstoppable dream team. Instead, card packs are bundled with not just fighters, but tiered moves, perks, and bonuses as well, essentially painting each fighter as blank canvases for you to outfit with whatever moves you choose. It's a fascinating idea, and there are a number of single and multiplayer modes for you to unleash your Frankenstein's monster on. Microtransactions are still a factor, letting you spend real-world money on premium card packs, but there's enough in-game money to be earned from various fights and challenges that paying real money never seems necessary. Time will tell whether this changes once you fancy testing your mettle at high-level Ultimate Team play.

Once you do take the fight online bouts against human opposition offer a similar level of latency-free smoothness as those against the AI. There are rare occasions where you'll find yourself in a stuttering, laggy game, making it difficult to execute moves and react to your opponent with the precision you would hope for, but so far matches like this have been few and far between. As with most online games, your mileage will vary depending on who you’re matched up against, but UFC 3 offers a smooth online experience for the vast majority of the time.

EA Sports UFC 3 is a tense, exciting, and dynamic recreation of the stand and bang aspect of mixed martial arts. There's a fluidity to the way it moves, and a satisfying feel and unpredictability to the way fights can unfold that demands your engagement. The grappling still needs plenty of work, and one would hope this is something EA Canada addresses in the next iteration; yet these shortcomings become easier to overlook because of the accomplishment of its redefined striking. When it comes to the art of combat, few sports titles do it better.

View Comments (55)
Back To Top
8
Great
About GameSpot Reviews 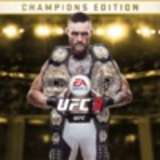 If the grappling in EA Sports UFC series ever catches up to the striking, Richard might finally stop wishing for a new Fight Night. GameSpot was provided with a complimentary copy of the game by EA.