This great fighting game nails the look and feel of the UFC and demands strategy as well as quick reflexes.

Regardless of how well a fighter can talk trash about an opponent or how spectacular an entrance he can make, his performance in the ring is ultimately what he's going to be judged on. UFC 2009 Undisputed is a fighting game that's best appreciated in much the same way, because while its presentation is far from perfect and its Career mode is unnecessarily clunky, the action inside the octagon is enthralling. Combat is accessible but deep, and demands strategic thinking and quick reflexes in equal measure, making this an enjoyable and unique game that does a great job of re-creating the mixed martial arts action of the UFC.

Dozens of real UFC fighters represent five different weight classes on the game's roster, and for the purposes of the game, each of them specializes in two fighting disciplines--one striking (boxing, kickboxing, or Muay Thai) and one grappling (Brazilian jiu-jitsu, judo, or wrestling). The intuitive controls, which map your fighter's limbs to the four face buttons, are largely the same regardless of which disciplines you're using, but the moves at your disposal are varied enough that every style feels different. Playing predominantly as a striker, you spend your time throwing punches and kicks, targeting your opponent's legs and body if you want to slow him down, or his head if you're looking for a knockout. As a grappler, on the other hand, your goal is to take your opponent to the floor, where you can indulge in some brutal ground-and-pound or use the right analog stick to transition between different mount positions in the hope of gaining an advantage. Forcing an opponent to tap out and submit is an especially satisfying way to earn a victory as a grappler, and the frantic button mashing (or analog stick rotating) that both fighters must engage in when a submission hold is initiated and the struggle ensues feels appropriate, if inelegant.

Though Undisputed's basic controls are easy to pick up, the depth of the combat system can initially be intimidating. Fortunately, the tutorial does a great job of introducing you to some of the game's more unusual mechanics and incorporates a practice mode in which you can go to town on an opponent who'll retaliate only if you want him to. That's great for figuring out which moves can be strung together as combos and at what range they're effective, but the real lessons start when you step inside the octagon and have to contend with very different opponents. Even fighters who employ the same disciplines can have very different styles, and it won't take long for you to realize that adjusting your approach accordingly is often the key to success. It would be an exaggeration to say that no two fights are ever the same in UFC 2009 Undisputed, but they're always a little unpredictable, because at any moment a well-timed reversal or counter can change everything.

Your defense is every bit as important as your offense in UFC 2009 Undisputed, and that's something that you need to bear in mind when creating a fighter for use in the clunky-but-compelling Career mode. The options for customizing your fighter's appearance are rudimentary compared to those in recent wrestling and boxing games, but by contrast there are an impressive number of different attributes and skills that you can put points into. In addition to the basic strength, speed, and cardio attributes, there are no fewer than 16 different offensive and defensive skills to consider. You might decide that you want to specialize in standing kicks and clinch strikes when you're on the offensive, but also devote some points to making sure that you can defend against takedowns, ground grapples, and submissions, for example.

One of the best things about Career mode is that you really progress as a fighter as you play through it. By training and sparring in between matches you can both improve your attributes and add new moves to your repertoire. Unfortunately, the training itself is rarely compelling. Physical attributes are improved simply by clicking on menu options; skill points are earned in dull two-minute sparring sessions; and new moves are unlocked during camp visits in which you must perform specific tasks within a time limit. Given that you generally have anywhere from 8 to 18 weeks to train between fights, you unfortunately spend more time navigating menus, reading repetitive and occasionally inaccurate e-mails, and managing your schedule on the calendar than you do fighting inside the octagon.

Worse still, when you start making a name for yourself and gain new sponsors, applying their logos to your shorts (which earns your fighter credibility) is a painfully time-consuming process. You have to click through six or seven menus, pick a spot for the logo, find the logo among all of those available to you, apply it, and then click back through all of the same menus again to return to the gym. Regardless, Career mode is definitely a highlight of the UFC 2009 Undisputed package, and when your career ends (after 30 to 40 matches) and you're forced to retire, you're left with a finely tuned fighter that you can use in exhibition matches both locally and online.

Like most fighting games, Undisputed is best enjoyed with human opposition. The AI is challenging and mostly believable, and there are multiple difficulty settings to choose from, but it's much more satisfying to go toe-to-toe with a friend who is within striking distance. Online fights against complete strangers are also a lot of fun, but sadly, lag-free action is the exception rather than the rule. Many online matches suffer from enough lag to make animations look a little jerky, and occasionally the lag is bad enough that it can throw your timing off.

Outside of Career mode and the exhibition matches, there's a challenging Classic Fights mode that's well worth checking out. Here, you're treated to history lessons on some of the UFC's greatest matchups and rivalries via video clips and interviews and are asked to re-create them. It's not enough that you win these fights; rather, you have to win them in the correct round and in the correct way, which in some instances means using a specific move. The video highlights of the real fights that you unlock for succeeding are worth the effort, though, and serve as a reminder of just how accurately these fighters and their respective styles have been replicated in the game.

Like practically every other aspect of Undisputed, the game's visuals are at their best when you're inside the octagon. Fighters are instantly recognizable, the animation is smooth and believable, and the way that an opponent recoils after taking a heavy blow makes punches and kicks feel like they have some weight behind them. You might tire of always seeing the same cuts and bruises appearing on fighters' faces, but they're certainly preferable to health bars and the like. Outside of the octagonal cage's walls, different fight venues have almost no distinguishing features and are filled with fight fans who aren't nearly as lively as the noise of their enthusiastic cheering and booing might suggest.

There's certainly no shortage of enthusiasm in the fight commentary, which comes courtesy of UFC announcers Joe Rogan and Mike Goldberg. It's well delivered and invariably accurate, and it really adds to the TV-style presentation of each and every match. Outside of the octagon, audio largely consists of hard rock music from the likes of Papa Roach, Puddle of Mudd, and Hollywood Undead. Like it or loathe it, it's a perfect fit for the game.

Despite some clunky menus and the lackluster online performance, UFC 2009 Undisputed is a great fighting game that you don't have to be a fan of the sport to appreciate. Whether you're playing as a UFC superstar like Chuck Liddell or Georges St-Pierre, or nervously stepping into the octagon as an athletic approximation of yourself, great fights and good times are guaranteed. 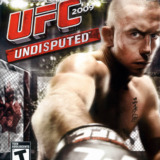 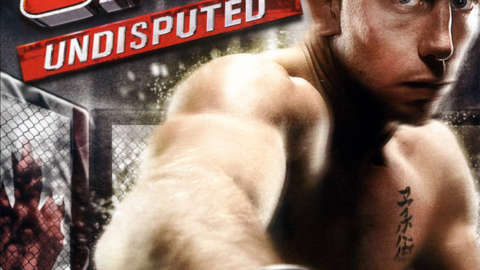 UFC 2009 Undisputed is a game based on the Ultimate Fighting Championship and features the best mixed martial-arts fighters in the world.