World War II has been done before and done better, but it's never been done like this.

In World War II games, not all Germans are bad. As ubersoldier Karl Stolz in the appropriately named UberSoldier II, you lead the German underground resistance against a dying Nazi regime with its back against a wall. With Soviet and Allied forces closing in on Berlin, the remaining Nazi leaders have fled to a secret base in Tibet to plan a devastating counterstrike. Outmanned and outgunned, only you can save the world from...oh, you know the rest. While UberSoldier II's story is so nonsensical and outrageous that you will openly laugh at--not with--the game during almost every cutscene, some fun gameplay twists and a bargain price make this shooter worth a look.

Initially, you're not all that uber, and the game immediately comes off as just another generic World War II shooter. Where UberSoldier II finally grabs you is at the end of the first level, where you can distribute experience points in a simplistic role-playing game upgrade system; there, you'll slowly transform Karl into a supernatural force of destruction. For reasons revealed in the original UberSoldier, Karl has several supernatural talents, such as the ability to deploy a time shield, a bubble of energy that surrounds his body and freezes all incoming and outgoing bullets in midair. A self-charging energy meter powers the shield and acts as your stamina when sprinting. This shield can be upgraded with experience points so that you can fire all bullets back toward your enemies. This means that you can fire a bullet into your own shield, where it will wait in stasis until an enemy pops out his fascist little head, and then turn off the shield to score a headshot. Additionally, because any frozen bullets that make contact with enemies are deadly, you can use the bullets as a form of melee attack by running at your opponents.

Balancing the shield use with Karl's other supernatural abilities, Ubersniper and Berserker, is the key to success in UberSoldier II. By scoring four headshots over a brief time period, you trigger Ubersniper and replenish your health. Ubersniper is slow-motion bullet time, and enemies and items such as health packs are brightly colored and more visible. If you make four consecutive knife kills, you trigger Berserker mode, in which you are invincible and slowly replenish your health with each successive knife kill. The key is that each series of three consecutive headshots or knife kills rewards you with experience points. There's no limit to how many you can earn in one level, so the game becomes a balancing act of survival by killing enemies, or earning XP by killing them in style. Your time shield allows you to get in close for knife kills, or queue up eventual headshots. You can still play UberSoldier II as a straight-up shooter, lobbing grenades and taking cover while unloading the contents of your MG42 into enemies--but you'll die a lot and won't have nearly as much fun.

After each mission, you spend XP on increasing your health, energy, accuracy, emotion time (the duration of Berserker and Ubersniper), and stasis shield. UberSoldier II starts off fairly easy if you're using your shield effectively, but the difficulty ramps up quickly. If you don't work for headshots and knife kills, your UberSoldier will never reach the required level of uberness to deal with the deadly, 10-foot-tall, rocket-launcher-wielding Ubermacht supersoldiers found deep within Tibet in later missions. Because you earn XP yourself, rather than being rewarded a set amount after finishing a mission, UberSoldier II's upgrade system is rewarding and quite addictive. It's a shame, then, that developer Burut Creative Team failed to build an immersive or engaging game around its unique mechanics.

The enemy AI performs adequately, making use of cover and throwing grenades to flush you from cover. There are only a few different enemy types and, outside of the hulking Ubermacht soldiers, they all act the same. A battle with entire divisions of female Gestapo troops plays out the same as it does against leather-clad officers or lowly foot soldiers. Your strategy, then, remains exactly the same throughout the entire game: Shoot everything that moves. Unfortunately, the weaponry at hand is limited, from the basic selection of WWII-era pistols, machine guns, and rifles. Don't expect any exciting prototype firearms to spice up the combat. The environments are equally bland, and neither a jaunt through Africa or a descent into a hidden Tibetan village will rouse much excitement. This is mostly because the levels are so linear in nature, and though it may take you an extra minute to find a key or locate a crawl space, there is only one path to take through UberSoldier II. Be sure to use the quicksave feature often because the game autosaves very rarely, and you'll lose hard-earned experience points when Nazis magically spawn behind you for a cheap death.

The atmosphere could have been improved had the artists committed to the comic-book style that it utilizes during cutscenes. The environments have an almost cel-shaded appearance to them, but the effect is so subtle that the visuals appear unremarkable. One exception is the final level, which could only be a secret missile base: It appears as if it were taken straight from the pages of a moving comic book. It's a shame that this vibrant art style was not used throughout the entire game; otherwise, UberSoldier II would've separated itself from the host of generic shooters on the market. The comic-book-themed cutscenes infuse UberSoldier II with some much-needed flavor. But these are soured by the ridiculous dialogue between Karl, his love interest Maria, and the evil enemy masterminds. Fans of campy adventures will get a kick out of the unintentionally funny storyline that is so bad, it's almost good. Almost.

The music is just as ridiculous as the voice acting. The grating rock-and-roll riffs intended to increase the gravity of a challenging battle do just the opposite and pull you out of the action. Instead of knuckling down to take on a regiment of genetically enhanced enemies in a WWII setting, you'll be trying to figure out which '80s TV show the soundtrack was inspired by. On a positive note, the music does raise the unintentional-camp factor.

UberSoldier II features online and LAN play, including 16-player Deathmatch, Team Deathmatch, and "Uberknife Fight." Strangely, multiplayer features none of the strengths of the single-player game, including the time shield or RPG upgrades in single-player. What's worse, the sprint mechanic is missing, forcing you to circle-strafe your enemies as if in slow motion. If you do manage to trigger Ubersniper or Berserker, you'll become invincible and move much faster. But good luck getting three consecutive knife kills without a sprint button. The multiplayer component of UberSoldier II feels like an afterthought, and an opportunity was certainly missed by not including the core mechanics that enhance the single-player game.

The RPG upgrades and shield abilities help separate UberSoldier II from the wealth of other WWII shooters on the market, but even at a budget price tag it's still not uber enough to be recommended without reservation. 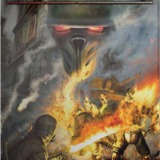