It seems almost as if this game is SCEA's form of an apology to the fans, while at the same time an attempt to win over some of the younger crowd.

The Twisted Metal series of car combat games is as old as the original PlayStation itself. The first Twisted Metal was one of the premier games for the system and found its place in the heart of many gamers new to the Sony style of games. The second, released in 1996, was a vast improvement upon an already great game, and for many, it was such an improvement that it rendered the first all but unplayable. With the first two installments, SCEA created the integral car combat games by which all others would be judged. Unfortunately, the original team of developers moved on to other things, and the series was moved to another studio for development. Twisted Metal 3 was widely considered a disaster, as it used a new physics model with "realistic" handling, which had no place in this style of game. Twisted Metal 4 was an improvement upon 3, but it never closed in on the control and style of the first two.

Twisted Metal: Black marked the return of the classic style of Twisted Metal, with many of the original team members having taken part in its development. The game skewed far from the more lighthearted outlook of the first two, however, and was aimed at an older, more mature crowd. Now enters Twisted Metal Small Brawl, which takes a younger, more lighthearted approach to the series' theme.

For those new to the series, Twisted Metal centers on a contest put on by the mysterious villain named Calypso, who locates and enlists willing (and some unwilling) participants in a deathmatch-type contest in which the winner takes all. The last car standing moves on, level by level, to defeat a set number of foes until he or she is the last left alive. At that point, Calypso promises to deliver one wish to the winner: a wish that is almost always twisted and contorted into what usually backfires on the winning entrant. In this game, Calypso takes the form of a schoolyard bully, harassing the characters into joining in his RC version of the Twisted Metal contest. He does this by stealing pets or just using force to coerce the characters into playing, either to regain their kidnapped pets, as in Shadow's case, or to try to finally evade the antics of Calypso's petty bullying, as Warthog is attempting to do. All of the game's drivers are young--in fact, they are all children who attend the same grade school. With this in mind, they can't reasonably be expected to drive full-fledged vehicles, and as a result, they are commanding miniature remote control vehicles. This takes away much of the implied violence by removing the element of fatal danger and therefore falls into the teen rating category of mostly suggestive themes and violence. This is not to say that the violence has been toned down--just that the drivers have been removed from the cars and are therefore not in harms way. At least not in regard to harm caused by the vehicles.

Eleven characters are playable from the outset, and following in Twisted Metal: Black's darker footsteps, there are another five that are represented by silhouettes in the selection menu--but they are playable only after they've been unlocked. The immediately playable set is made up of a group that will be remembered by fans of the series, as will a few of the unlockable characters. Crimson Fury has been brought back after a long hiatus since the first game, while favorites from the second game, such as Shadow, Mr. Grim, and Sweet Tooth, have made appearances in Twisted Metal: Black and now Small Brawl, some with different drivers and an entirely new look. For the most part, the vehicles look like miniaturized versions of vehicles that have been seen before, but some also sport new special weapons. Shadow maintains his ranged detonation attack (though it's now a flying grim reaper), which is now partially homing, but other characters like Thumper have different weapons altogether. Thumper has shed his devastating but limited flamethrower attack for a sonic bass blast that has range like a missile, and Crimson Fury has dropped his thin beam for a fireball. Mr. Grim still has his powerful projectile weapon, but now, in fitting in with the new character design, he throws a jack-o'-lantern instead of a skull or scythe (he seems to have an obsession with Halloween now and indeed wishes to be transported to a land eternally existing in the dark holiday). Fans of the first Twisted Metal will also be pleased to see that Grim is not sporting a sidecar, as he has in every game since Twisted Metal 2.

As pointed out by Sony, Small Brawl uses a tweaked version of the physics used in Twisted Metal 2. While this may be true, the game doesn't control exactly the same way and seems to play a bit more toward the loose. Twisted Metal 2 had a near perfect feel to it--a feel that doesn't translate to the new game as well as all would hope. It can be difficult to maneuver your vehicles at first, even for seasoned players, but the learning curve isn't so steep that it damages the gameplay irreparably. The game has the same frantic feel and appeal that Twisted Metal 2 has, but it doesn't have the same polish. This is understandable, due to the fact that the new game was developed with roughly half the budget of the older one, but this shouldn't be viewed as an excuse.

Graphically, Twisted Metal Small Brawl is decidedly lacking at first glance, but again, it's not so bad that it destroys the game. It seems obvious that most people who are still playing games on the PSOne are on a limited budget, are of the younger ilk, or aren't too concerned with graphics in the first place. It's precisely this crowd that the game is aiming to please.

The sound is decent overall. The strength lies in the music, which keeps in tune with some earlier songs that fans will recognize. For example, the first schoolyard level has a rerecorded version of the guitar-driven rock tune used in the Los Angeles level of Twisted Metal 2. Most of the other tracks are meant to fit in with the often quirky level designs that range from "Easy Death Oven," which takes place in a kitchen complete with a doubled over plumber working on the sink, to "Carn-O-Maul," a circus-themed level in which Sweet Tooth looks to be right at home. The negative point in the audio department lies in the sound effects. There is a general lack of coherent tire screeching and collision sounds, which can cause problems. Good sound should go hand in hand with gameplay, and this game fails on that point. Each weapon has its own unique sound, at least, but an aural backup for the frantic driving would have been nice.

The multiplayer mode has long been one of the strong points in the series. In this category, Small Brawl shines. While there aren't a whole slew of options, the three that are in the game are strong enough. There's a deathmatch mode that pits two players against each other in a duel, a cooperative mode that lets players progress in tandem while aiding each other, and a free-for-all mode, which includes AI-driven opponents along with the two players involved.

When all is said and done, it seems that the Twisted Metal series peaked on the PSOne with the release of Twisted Metal 2. The flagship car combat games took a dive when 3 and 4 were released, and with some of the original team working on Small Brawl, it seems almost as if this game is SCEA's form of an apology to the fans, while at the same time an attempt to win over some of the younger crowd. The result is a game that youngsters and die-hard fans will undoubtedly enjoy, but it's certainly not the game for everybody. Some will immediately be turned away by the graphics and others by the more childish design, but if your PlayStation is still kicking, you might want to check it out. 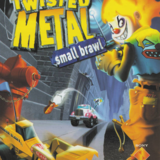