Once upon a time, a man named Calypso regularly held a tournament. It was a grisly contest of vehicular carnage in which entire cities were razed as the competitors destroyed everyone and everything around them in their mad quest for victory. But for many years now, the screams have gone silent. It has been over a decade since Calypso's tournament made its last full-fledged appearance on consoles. At long last, Twisted Metal is back, and this latest entry recaptures the large-scale destructive fun of the series' best games. As long as you're open to this particular brand of old-fashioned, fly-by-the-seat-of-your-pants insanity, you're sure to enjoy the beautiful chaos of Twisted Metal.

Just as the guns are central to the quality of any shooter, the vehicles are central to the quality of any vehicular combat game, and Twisted Metal's assortment of deadly machines on wheels is fantastic. Speed and maneuverability are available in sports cars like Kamikaze and the wildly fast Crimson Fury. If you're more concerned with durability, you might opt for the police SUV Outlaw, or the big rig known as Darkside. Classic Twisted Metal vehicles like Mr. Grimm's motorcycle (called Reaper here) and the ice cream truck Sweet Tooth are joined by a few new ones. The most notable new entry is Talon, a helicopter whose fragility is offset by its airborne freedom and its devastating ability to lift enemies into the air and then drop them to the ground.

Whether you choose the nimblest vehicle or the most lumbering, sharp controls make maneuvering around the battlefield intuitive and enjoyable. You can spin any vehicle into a tight turn, even in place, which isn't the least bit realistic, but sure is fun. It's also necessary for responding on the fly to the myriad dangers your opponents constantly hurl in your direction. Speeding around the vast maps is also exciting because there's so much to discover and so much of it is destructible.The peaceful hamlet of Sunsprings, California, will never be the same after you roll over its houses, crash through its supermarket, submerge your vehicle in a mansion's swimming pool, and battle on the roof of the local movie theater. In Metro Square, inspired by Times Square and its surroundings, you can cruise through subway tunnels, slide around on an ice-skating rink, and leave the displays at the natural history museum in heaps of rubble. It all looks great, and the soundtrack, which includes famous tracks by Rob Zombie and cheesy tunes by Sammy Hagar, is ideal accompaniment for the destruction, though you can replace it with your own soundtrack if you prefer.

The scale and the various interlocking pathways of the maps generate tactical possibilities and tension; it's thrilling to see an opponent speeding down an overpass above you in Diesel City and then gun it up an on-ramp in pursuit. And some maps introduce new dangers. Black Rock Stadium is designed to be deadly, with huge spiky balls, arcs of electricity, pools of lava, and other hazards all attempting to impinge on your survival. And on the rooftops of the LA Skyline map, you must balance aggression with caution, or risk careening off the edge to a damaging impact with the streets below.

Your objective in Twisted Metal varies depending on the game type, but more often than not, it involves turning the other vehicles into flaming husks. Each vehicle has a special weapon that regenerates over time, as well as a standard sidearm (such as unlimited mounted machine guns) and other abilities, like a blast that temporarily freezes enemies in place. Additionally, a great variety of weapons are strewn about the battlefield, so you're given a reason to scramble about the arenas, hunting for tools of destruction.

Some weapons, like homing missiles, you can fire and forget. Other weapons, like power missiles, can do significantly more damage, but require a straight, clear shot, and finding that isn't easy in the heat of battle. With a shotgun, you just need to get in close and pull the trigger, but napalm requires a well-timed button press to bring it raining down on an enemy. You can carry several types of weapons at once, and making the most of your arsenal means switching on the fly to the most effective weapon for the situation you find yourself in at that instant.

On the surface, Twisted Metal may look like absolute chaos, with vehicles ramming into each other and explosions happening all over the place. But in fact there's a great deal to consider at any given moment, and once you get used to taking it all in, the stimulating mix of making effective use of your weapons, racing to snag health pickups, and ramming into your opponents at speed becomes an exhilarating, cacophonous dance of metal and fire. All of this may sound very familiar, and it's true that Twisted Metal doesn't fiddle with the fundamentals that have made the series so exciting in the past. But that is no bad thing; on the contrary, this kind of vehicular combat has been absent from the console landscape for so long that its return is more than welcome.

But what about the participants? What would drive people to risk everything and test their mettle in this deadly tournament? If you've played previous Twisted Metal games, you know that Calypso promises the victor the fulfillment of a wish. You also know that Calypso typically makes good on his promise, but rarely in the way the winner envisioned. It has always been morbidly entertaining to see just what Calypso has in store for the victors, and in this latest Twisted Metal, it still is. But whereas earlier games featured a different story for each vehicle's driver, here, the single-player story has you playing as just three contestants: Sweet Tooth, Mr. Grimm, and Dollface.

In another departure, the unbreakable link between driver and vehicle is gone. No longer does Sweet Tooth drive only the ice cream truck, or Dollface drive only Darkside; you can drive any available vehicle as whichever driver the story is currently focused on. This means you're never stuck driving a vehicle you don't like, but for Twisted Metal veterans, using Outlaw while advancing through Sweet Tooth's story might feel a bit like playing as Guile while progressing toward Ryu's ending in Street Fighter II.

That odd disconnect between vehicle and driver aside, the live-action cutscenes are grisly, grindhouse-style fun, and Calypso's in top form when it comes to fulfilling wishes in wonderfully twisted ways. The three endings make a fine reward for your hard-earned victories over the Story mode's impressive bosses, though the feeling of triumph these battles leave you with is a reward in itself. Each of them puts you in the shoes of David against a relative Goliath (or two), whether you're battling a pair of massive monster trucks, a huge flying robot, or the staggeringly large vehicle that you face in the final confrontation. These battles have multiple stages, and though the game doesn't skimp on the difficulty, it's kind enough to let you pick up at whatever stage you reached when you died, so it never feels punishing. One particular stage of the second boss battle may still have you tearing your hair out in frustration, but for the most part, these face-offs are tough but fair, and they leave you feeling like a champion when you emerge victorious.

The Story mode also includes some challenging variations on the standard deathmatch scenario. In a few stages, there are trucks called Juggernauts cruising the field and spawning new enemies every few minutes, which puts the pressure on to hunt down and take out the Juggernauts as quickly as possible. A much more drastic departure from typical Twisted Metal action comes in the Story mode's few checkpoint races. Speed takes priority over firepower here, and the game's fastest cars are fun to put through their paces, making wildly tight turns and accelerating like a bat out of hell as you rocket toward the finish line. One of these races involves making some tricky jumps among the rooftops of Diesel City, where one mistake means you fall to the ground with no hope of catching up and may as well start over. It's frustrating, to be sure, but it's also thrilling to finally nail those jumps and snatch victory from one of your opponents in the final milliseconds.

The Story mode can be tackled by two players via split-screen, just like in the good old days of the franchise. Sharing the struggle and coordinating tactics with a teammate is great fun, but disappointingly, there's no option to play the campaign cooperatively online. Outside of the Story mode, four players can play split-screen Death Match and other competitive modes. But it's in the large-scale online multiplayer battles that Twisted Metal really shines. In a 16-player Death Match, the action is far more raucous and unpredictable than when playing against AI. This is at least partially because AI opponents never really try to kill each other; they're all out to get you. In the free-for-all of human competition, players are smart enough to make full use of the map, clustering together in hostile frays when it's advantageous and retreating when health is low.

In addition to Death Match and Team Death Match, there's Last Man Standing and a team variant, and Hunted and Team Hunted, in which everyone's out to kill a designated player, and killing that player makes you the next target. Finally, there's Nuke, a team-based mode in which teams take turns playing offense and defense. On offense, your goal is to capture an enemy chieftain and speed him or her to a missile launcher, where the chieftain is sacrificed and you guide a missile into the other team's statue. On defense, your goal (of course) is to prevent this from happening. It's a thrill to speed across town with a chieftain in tow, enemy vehicles hot on your heels, and guiding a missile into the heart of an enemy statue is an explosive and satisfying way to help your team. In all of these modes, the human element gives battles a dynamic energy that's thrilling from moment to moment.

Unfortunately, at this point, getting into those online battles isn't nearly as smooth and hassle-free as it should be. Connection errors are common when attempting to join games, and other quirks crop up frequently. For instance, you might select Team Games (which specifically refers to Team Death Match, Last Man Standing, and Hunted) under the Quick Online Action option, and find yourself dropped into a game of Nuke, which has its own separate category. Hopefully these kinks will be ironed out quickly, because the underlying online experience is immensely enjoyable.

Certain franchises go overboard, producing sequels so frequently that you don't have time to miss them before the next installment is upon you, like a houseguest whose company you enjoy but who overstays his welcome. With Twisted Metal, the effect is the opposite. This brand of vehicular combat is every bit as thrilling today as it ever was, and you may be left wondering why it stayed away for so long. But what really matters is that it's back now, and it is great; Calypso hasn't forgotten how to throw one hell of a competition.

View Comments (80)
Back To Top
8
Great
About GameSpot Reviews 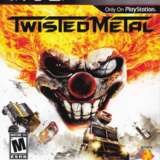