The Twisted Metal series first arrived a few months after the PlayStation's US debut. It was in the forefront of games that really showed off the difference between 32-Bit CD-based systems and the 16-Bit cart platforms that came before. While driving and shooting games had previously existed, Twisted Metal was responsible in part for defining the car-combat genre by putting over-the-top characters into vehicles with arsenals of weapons and special moves and letting them battle it out until only one remained. The second game in the line, Twisted Metal II: World Tour, was a longer, improved version of the original, and it is generally thought of as one of the best games ever released for the PlayStation. But by the time the third title came along, the series' developer, SingleTrac Studios, had been sold to GT Interactive, and publisher 989 Studios opted to bring the line in-house. While the game had new weapons, contestants, and multiplayer options, its levels lacked the originality of the earlier titles, and its new physics engine was more of a frustration than an improvement. Though it sold very well, Twisted Metal III was a huge disappointment, making the question of how Twisted Metal 4 has turned out all the more important for its fans. Rest assured; it's much, much better than its predecessor.

To begin with, the level design in Twisted Metal 4 is a big improvement over Twisted Metal III's. There are more hidden areas than in the previous games, and you'll likely play a level more than a dozen times before finding everything. Standout levels include Amazonia 3000 BC, which has quite a few different tiers to sneak off to, and The Oil Rig, which has lots of satisfying places to set traps. Each stage also has a secret weapon that you can use on your enemies until someone comes and knocks you off the weapon's controls. For instance, in the first level you use a large magnet, which sucks your opponents high up into the sky, preparing them for a big drop. The levels aren't quite as epic as those in Twisted Metal II: World Tour, but they get the job done well. The only one that's kind of dull is the first - a construction yard with a lot of topographically flat spaces.

The control and physics are also better than in TMIII, but they remain a little too touchy and unforgiving. It's still a little too easy to flip over, or miss a ramp, or go skidding off and get momentarily stuck on a ledge, but it doesn't happen nearly as often as in the previous game. Though prettier than those in TMIII, the graphics in TM4 aren't nearly as sharp as the graphics in its current main competitor - Activision's Vigilante 8: Second Offense - and while the game music fits well enough, it doesn't really draw you in. Each level has its own extended, looped version of songs by bands like Cypress Hill, Cirrus, and Skold; the best among them being remixes of the Rob Zombie tracks that appeared in Twisted Metal III.Several new weapons in the series will become quick favorites, such as the M.I.R.V., the freeze remote (a remote bomb that freezes everyone in the area), and the proximity mines (which work well when you leave them in teleport areas or drop them as you're being chased). Other welcome additions to the line are the new tournament contestants, which include the exterminator truck-driving Goggle Eyes and Rob Zombie, whose Dragula possesses a special weapon that grabs any vehicle in the area and holds it for a moment, while he shoots at it until it explodes. The new create-a-car option offers you three choices for size, style, and paint; four choices of special weapons; spoilers; and more than a dozen taunts. While this is a decent start and better than nothing, doubling the numbers would have really given you the ability to customize a ride just the way you like it. As it stands, you'll likely just use one of the vehicles already provided for you.

Another change is that instead of just having a mid-boss and an end boss, Twisted Metal 4 features bosses at the end of every level who are made up of one or two "super" versions of missing contestants (such as Axel and Thumper). It may sound like a good idea, but it ultimately ends up taking away from the feeling of dread you used to feel when a boss emerged in the past. (Remember when the words "Prepare for Minion" appeared in Twisted Metal and Twisted Metal II: World Tour?) At least that's the case for all the sub-bosses. When Sweet Tooth finally comes out in the end, you'll run like hell.

The two-player multiplayer modes - co-op and deathmatch - still let you configure the split screen by horizontal or vertical cut as well as variations on a four-way split where the other two boxes are filled with radar, speedometer, and weapons info. (The four-way split modes are the best, since you view the world through a smaller version of the full screen.) The problem is that the frame rate in the multiplayer modes isn't nearly as fast as in the single-player levels. If you play as one of the larger, slower vehicles, you'll end up using the turbo quite a bit out of frustration. (Luckily, the framerate's not noticeably lower in four-player thanit is in two-player.) Even with this working against it, the multiplayer mode offers tons of replay value, whether in a deathmatch or a co-op tournament with a friend. And adding to the single-player side is the option to use a CPU ally to help you in the fight. While all these options were also present in Twisted Metal III, they're better realized here because TM4 is a game you'd actually want to play.

In the end, Twisted Metal 4 is as huge a leap ahead of Twisted Metal III as the second was to the original. While the series hasn't quite reclaimed its former glory, it at least seems to be on the right track. 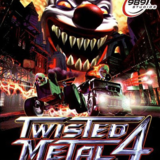