In the end, Twisted Edge turned out to be too little, too late.

When Boss was developing Twisted Edge Extreme Snowboarding for the Nintendo 64 more than a year ago, it seemed as though the sky was the limit. The fledgling console was still trying to expand its library of sports titles, and competition for a good snowboarding title was nonexistent. If Boss could have finished Twisted Edge and released it to a market famished for a solid winter sports title, things might have been different. Reviewers would have judged Twisted Edge by a whole different set of rules - rules that Boss would have essentially defined for itself by having released the only snowboarding game on the Nintendo 64. After the game was announced at E3 '97, Twisted Edge began to garner the hype and momentum that Boss needed to get this game the recognition it probably deserves. Unfortunately, events took a turn in the spring of '98 when Nintendo released 1080 Snowboarding - a title that would eclipse and better Twisted Edge in every way.

There will inevitably be comparisons drawn between Twisted Edge and 1080 Snowboarding. On the surface, the overall features and objectives of the two games seem nearly identical. There is the single-player race circuit in which players compete with CPU-controlled opponents in a downhill race at breakneck speeds. Winning races will unlock the next skill level and a few extra tracks, until ultimately, the game is "beaten" in the traditional sense. Some of the tracks contain side paths and shortcuts, as well as a mirror mode that gets rather redundant fairly quick. The game also has a number of secret characters and snowboards that become available as you continue to win races.

While both Twisted Edge and 1080 have a split-screened two-player mode, Twisted Edge's two-player mode stands a notch above its competitor in terms of presentation and playability. Boss opted for a vertical screen display, as opposed to Nintendo's horizontal split-screen, which allows for a greater sense of height and vertigo when pulling tricks in the air. Yet somehow, Twisted Edge's two-player mode just seems to lack any sense of urgency to make it compelling for replays. Besides, there's no incentive to pulling off midair tricks, because any extended amount of flying antics leads to crashing or falling behind.

One of the more addictive modes in Twisted Edge is the stunt challenge, in which you must perform a certain amount of moves in order to move onto the next course. Added to the test is a dwindling timer that's replenished each time you successfully pull off a stunt. Naturally, there's a real incentive to keep the moves flowing - the flashier the better. While there is a practice mode in Twisted Edge, it doesn't seem to live up to 1080's helpful training mode, which makes learning the large number of moves easy and fun. There is also the gaping omission of a half-pipe stunt track in Extreme Edge. This really curtails any long-term replay value this game had the potential for. As it is, all mad aerial stunts are performed while players are speeding downhill, so it loses the tick-tock rhythm of a half-pipe course. Out of the seven tracks in Twisted Edge, only one of them is really a dedicated stunt track. But it is by far the most addictive track in the game. Simply titled, The Big Jump, you must drop out of a hovering helicopter and propel down the side of a mountain that's basically one lofty leap after another. Twisted Edge's track designs are refreshing though, and this helps give the game some much-needed variety. Compared with 1080 Snowboarding, the controls in Twisted Edge are more basic and less complicated. In order to gain momentum, one simply drifts downhill until he reaches maximum velocity. Nose, heel, tail, and indy make up the four grab buttons (R1, Left C, Z, and B respectively) you need to master. Unlike 1080 Snowboarding, Twisted Edge does not take advantage of a button to gain speed. That one function alone gave 1080 Snowboarding a much more physical association. Fortunately, the movement of the snowboarders is responsive and tight, allowing for some harrowing maneuvers. Moves are separated into three major categories: flips, spins, and grabs. It was a pleasant surprise that one of Twisted Edge's strongest points lies in its sheer list of moves (there are over 30 moves). In contrast to 1080's gameplay, which requires you to input moves during a jump, Twisted Edge's inputs take place before pushing the jump button. Once a move has been successfully launched, you can chain it along with other moves - as long as they all squeeze in the timing before landing. Sticking a landing has never been easier. Just make sure the board is leveled before touching down. Most of the time, you will be more concerned with pulling off a trick in midair before actually hitting the snow. There is a sense though, that the overall pacing of Twisted Edge is a bit more sluggish than 1080's. While the collision detect on both snowboarding games is mediocre, Twisted Edge seems to have the more frustrating of the two. Once you lose the momentum you've garnered, you'll find yourself plodding along to the next drop-off. This is where 1080's "push" button could have come in handy to help keep the speeds at a decent pace. As it stands, Twisted Edge has too many stop-and-go moments to really convey a sense of constant velocity. The fact that Boss made gaining speed so difficult after a crash stands as the biggest gameplay flaw of Twisted Edge.

While the visuals in Twisted Edge are a notch below 1080 Snowboarding, they are quite dazzling in and of themselves. To its credit, Twisted Edge does convey a great sense of speed on some of the faster tracks. While the graphics look bland and washed-out when compared side-by-side with 1080 Snowboarding, Twisted Edge's minimalist approach seems to have paid off in another way. As a result, the game almost looks cleaner and less cluttered than 1080 Snowboarding. Carving into the snow is nicely represented by a transient streak that follows the snowboarder. Also worth noting is Twisted Edge's excellent motion capture for the snowboarders and their moves. Each of the more than 30 moves animates stylishly and integrates smoothly from one to the next in a chain combo. Descending at 50-60 miles an hour while leaning on your front-side edge for the approaching turn all looks very convincing and realistic. On occasion though, there are slight clipping problems when you hit a wall or a large obstacle in the track. The polygon breakup tends to only worsen as you struggle to regain the speed you've lost by jumping and turning to face downhill. Other visual shortcuts include the lack of wipeout animations. Violent crashes deserve disastrous results, but as it is now, there's a lot of agony in not sticking a 200-foot landing. On the whole, the graphics are decent, if not a little lackluster. Sound is hit or miss in Twisted Edge. For instance, the obnoxious West Coast snowboarder stereotype voice acting (which can thankfully be turned off) completely ruins any ambience Twisted Edge hopes to create. Equally bad is the background music that sounds like a generic synth-bass patch, slapping and popping in a MIDI studio. The implication that this soundtrack was actually conceived by a person who was then paid for his work throws one into quiet despair. By turning off the voice and music, Twisted Edge provides a much greater sense of immersion and ambience. The sound of your board cutting through packed powder snow sounds very familiar and is generally very well done. Remember the secret to getting every ounce of enjoyment from Twisted Edge lies in turning off the voice and music from the options menu.

For all those who have played and loved 1080 Snowboarding, Twisted Edge will take a little getting used to, and holding onto your own copy will most likely be an act of acquired taste. While the game does carry with it the spirit of snowboarding, there is very little else to recommend this game over 1080 Snowboarding. Had the game included a half-pipe track or a button to gain speed, it would have been rated much higher purely for replay value alone. But then again, that would have just made Twisted Edge more like 1080 Snowboarding. Also left out were licenses from real snowboard companies such as Burton or Lamar (Cool Boarders 3 and 1080 Snowboarding both had official endorsements), which would have boosted the game's authenticity. It's unfortunate that one game could be so completely overshadowed by another, but in the end, Twisted Edge turned out to be too little, too late. 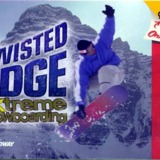