Despite being a rehash, Turok 3 is a well-balanced, varied platform gaming experience.

After two failed attempts and the much improved Rage Wars, Acclaim is back with another Game Boy Color Turok title, Turok 3: Shadow of Oblivion. Unlike previous releases, though, this one's actually pretty well rounded and mixes a decent plot with engaging gameplay. It seems Turok's past efforts against the Dinosoids have convinced them that a peaceful coexistence with humanity is possible. Unfortunately, a rebel Dinosoid sect disagrees, threatening to reawaken the ages-old war. As implausible as it may seem, Turok's role is to aid the peaceful Dinosoids by quelling the rebels. Unbeknownst to Turok, however, there's a darker menace at work, pulling the strings from behind the scenes.

The game begins with a top-down three-quarters view of Turok in a tank, struggling to break into the enemy's fortress. At times, you'll have to leave the tank and progress through a number of side-scrolling, Final Fight-style levels. Snag a few keys and it's time to take on the main force - another 19 levels of lizard-slaying mayhem. As you get further into the game, you'll encounter more horizontal, vertical, isometric, and even a couple first-person levels. The goals in each are the same, however - kill everything that moves, acquire items, and find the keys to unlock the next stage. If you've played Rage Wars, you won't find much new in Shadows of Oblivion. However, acquiring weapons in this installment is much easier, while the addition of vehicles, such as jeeps and tanks, does much to imbue life into a nearly played-out series. It would have been nice to see a two-player deathmatch feature or some sort of practice mode, though.

Just as Turok 3's gameplay builds upon and refines a successful formula, so too do the game's visuals. Jungle, base, and city backdrops are highly detailed and crisp, while the game's character sprites flow as if motion captured. For once, a Turok GBC title doesn't look as if it were painted with eight colors. The egregious flicker that was present in the last release has also been fixed. It's too bad Bit Managers didn't improve the sound quality, though. There are still many unique background tracks, as well as the requisite weapon and explosion sounds, but the entire lot comes across as cheap and muddled. If you've played any of the prior GBC Turok games, however, you won't find Turok 3's audio any worse.

Despite being a rehash, Turok 3 is a well-balanced, varied platform gaming experience. The vehicular and top-down levels give the game an activity-oriented feel, while the side-scrolling missions deliver the tried and true formula of bloodshed and mayhem the series' fans crave. If you're bored of Turok titles, Shadows of Oblivion is only a refinement on the theme. However, if the last few titles left you wanting more or you're new to the series, Turok 3 would be a fairly decent acquisition. 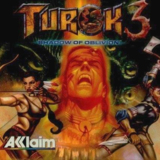 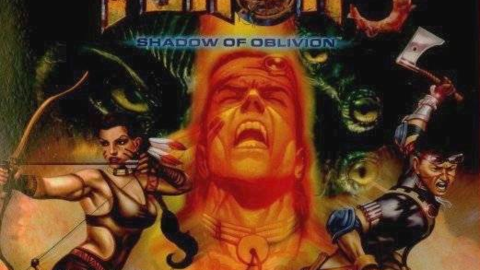 Despite being a rehash, Turok 3 is a well-balanced, varied platform gaming experience.