Turok 2 starts out poorly, but it does have some redeeming qualities.

Dinosaur games just can't seem to get a break. Trespasser was terrible, Turok was an ignored blip on the PC radar, and even Carnivores, despite that fact that it was a decent, make-believe hunting game, didn't get much attention. So how does Turok 2 fit into this distinguished group of dinosaur shooters? It's not a bad dinosaur game when you compare it to present company, but when you compare it to the best of current first-person shooter fare, that's when you discover you really don't want to play Turok 2. Turok 2 starts out poorly, but it does have some redeeming qualities. It's too bad they aren't enough to separate it from the mediocre games of this genre.

The graphics in Turok 2 are fairly good, especially the monster animations and weapons special effects. There are multiple death and pain animations for the enemies, many of them depending on what area of the body you hit. Shoot an enemy in the hand and it'll clutch it in pain. Blast its face and its head will whip back from the force. Shoot an enemy's chest at point-blank range and a gaping hole will appear in the middle of its torso. There are also some nice death animations: Dinosaurs convulse and then collapse to the floor; raptors wobble precariously while spouting blood before crumbling to the ground. Some enemies' torsos explode, and other creatures lose limbs and then fall dead. However, these animations do get repetitious after you've played a few levels.

Turok was noted for its impressive weapons, and Turok 2 is no different. There are more than 20 weapons, ranging from mundane bows and pistols to multiple-rocket launchers, nuke launchers, and dinosaur-mounted mortars. There are melee, projectile, and energy weapons. There are even weapons to use underwater, such as a harpoon gun and torpedo launcher. The flamethrower is the best-looking such weapon I've seen in a first-person game, and the animation of its liquid flame is quite impressive. The special effects on several other weapons, such as the nuke and scorpion launcher, are equally good-looking.

The AI for the enemies in Turok 2 is noteworthy in that it isn't mindless. If you go after enemies while you are on the back of a triceratops armed with twin-mounted mortars, they'll run away from you. If you're on foot with a puny gun, they'll charge you. They might even dodge your bullets if they have time or hide behind crates and shoot at you from cover.

The enemies in Turok 2 are a mix of reptilian and alien bipeds. There are a few raptors and reptilian lizardmen early on, as well as a good variety of alien enemies later - ranging from spindly organic creatures to wide hulks that vaguely resemble the alien grunts from Half-Life. Turok 2's bosses are gigantic, multi-part creatures. In most cases, you must blow away eyes, arms, or tentacles before you can dent the meaty vital parts of the boss. These bosses are noteworthy because of their size, but otherwise aren't drastically different from your run of-the-mill bosses.

Aside from the cool weapons and effects, the game plays like your typical old shooter. As I roamed through confusing environments and blasted weird dinosaur-human hybrids, I thought the game wasn't too bad. In some instances, it was actually fun and showed a few nice flashes of good AI or detail. But if you've played Half-Life, it is hard to go back to games like Turok 2. Except for the weapons, it's not graphically state-of-the-art, doesn't have any particularly noteworthy levels or design, and continues the same key-hunting, switch-turning fare of old shooters. The pacing is faster than in Turok, but it's still slow when compared to such games as Quake or Sin. Nor does it offer anything in the way of an involving story or suspense to justify its slower pacing, something that Half-Life did brilliantly.

Worst of all is the hub-based gameplay and confusing level design. The problem with hub-based games, like Hexen II and Turok 2, is that there is no clear direction. The designers want you to explore every nook of the level, by looking behind crates and blowing up every barrel in sight to reveal secret caches of keys. But these hub-based levels are huge and sprawling, and if you miss the tiniest detail or object, which you need to advance to the next level, you are out of luck. You must now wander the entire level again, retracing your steps and looking for the last barrel you failed to shoot or the last crate you didn't move and find that key that will take you out of this level that you had otherwise finished long ago. There is no shame in crafting a linear level that propels a player along at a fun pace. Whatever you might say about its lack of story, Quake at least had clear direction and didn't lose you halfway through the level. It's the unnecessary retracing of steps that is really annoying in Turok 2.

If you love shooters, you'll like Turok 2. It's obviously not in the same league as Half-Life in design and immersion, nor does it compare to Quake for pure entertainment. It's not the most fun shooter, but if you don't mind old key-hunting gameplay and the annoying hub-based design, by all means step into Turok's shoes again. 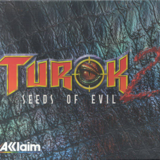