Compared with VR Sports' Power Boat Racing, Turbo Prop Racing is better in every possible way. But even still, the lack of innovative courses, boats, or gameplay still leaves video-game boat racing dead in the water.

Turbo Pro Racing has six unique tracks, which can be raced in mirror mode, or at nighttime for a little variation. There is a random track generator in the game, which you can unlock if you do well enough on the existing tracks. Unfortunately, all of the courses are so narrow and limited that they aren't any fun to race. You feel more like a rat in a maze than a boat racer. The game's two-player mode isn't bad; you can race one-on-one, or you and a friend can race along with all of the rest of the pack. You can decide whether you would like to race with the screen horizontal or vertical.

The control seems a bit unresponsive at first, but then, boats aren't exactly the tightest-controlling vehicles in the world. The regular controller really doesn't stand up to the Dual Shock here, mostly because of the vibration, though the analog control helps. But the little bit of freedom you gain when racing with the analog controller is stifled by the claustrophobic, narrow courses.

Visually, Turbo Prop Racing is fast. The water looks pretty good, but the boats and levels are quite plain. The game runs quickly, usually up around 60fps. The pop-up or level draw-in isn't terribly bad, as was the case with the visually dismal VR Sports Powerboat Racing. The sound effects and music in Turbo Prop Racing are actually pretty good. The hip-hop/techno music is a little reminiscent of the Wipeout soundtrack.

In the end, Turbo Prop Racing is just another racing game. If you're really, really into powerboat racing, you might find Turbo Prop Racing slightly appealing. If that's the case, rent it, but it really isn't worth buying. 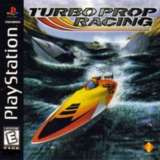 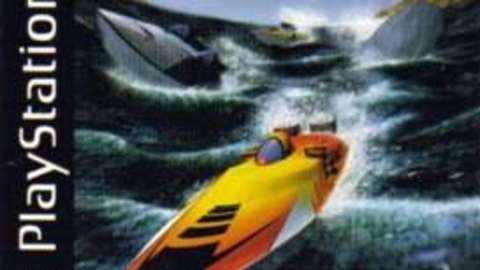