If Justin Roiland's name wasn't on the title screen, it would still be glaringly obvious who was responsible for Trover Saves The Universe. It would be clear within 10 seconds of hitting the start button when a massive blue alien shaped like the galaxy's most abominable chicken nugget shows up and uses your two adorable pet dogs as his new eyeballs; it would be undeniable the second our hero, the neurotic purple alien Trover, opens his mouth and the voice of Morty comes streaming out. The fascinating thing isn't that we've got another video game from the twisted mind behind Rick & Morty. It's in watching those twisted M-rated ideas mingle with all the trappings of a bog-standard 3D E-for-Everyone platformer.

The bonkers premise is that the aforementioned chicken nugget, named Glorkon, has somehow obtained god-like power from sticking your dogs in his eyes and will be kickstarting the apocalypse post-haste. You, meanwhile, are a hapless, milquetoast sucker from the suburban world of Chairorpia, where the entire population is bound permanently to floating couches, doomed to forever watch a soap opera that suspiciously feels like it's trying to teach you the game's controls. Our hero, Trover, eventually shows up on your doorstep and tells you he needs your help to take down Glorkon. Using the unstoppable might of power babies--an entire species of adorable multicolored cherubs who actually belong in the eyeballs of Trover's people--and with you at Trover's back controlling his actions, the two of you set out on a galaxy-spanning quest to figure out how to take Glorkon down.

There's a lot going on there, and it's not even scratching the surface of the absolutely bewildering cavalcade of profane oddity that follows. The very first level, your quest for a special crystal that will allow you to visit Glorkon's home dimension, is interrupted by an annoying little cuss named Mr. Popup who tells you about an alien neighbor who not only ate his family and is holding several pregnant Popup species females hostage so he can eat their babies, but more importantly, has no regard for his neighborhood's real estate zoning agreements. That's what kind of ride this is, and it only gets weirder and darker from there. Probably the best running gag in the game is a recurring one in which you inadvertently ruin the lives of the misshapen folks who sell you upgrades, each time accidentally killing their pets or relatives. Conceptually, it's wonderfully devious and outlandish, peppered in with moments of stomach-churning bodily function humor.

It's the execution that's less consistent, mostly due to the long, stuttery, and often yelled improv takes of Roiland and the rest of the cast just endlessly riffing to fill time. The game rarely allows for moments of silence to let the jokes that work land. More annoyingly, it allows too much time for the more obnoxious characters to work your every last nerve. Meanwhile, there's rarely enough silence to think your way through the more involved puzzles, which sometimes turns tricky into infuriating unless you turn down the dialogue for a couple of minutes. And that's a shame, because many of the dialogue-based jokes often do land, though you'll just have to take my word on that since absolutely none of the best examples are even remotely repeatable here. What I can say is the runtime of my first playthrough was likely tanked because I would spend minutes on end just listening to unaware enemies talk amongst themselves about being clones of Glorkon, going on about their workout routines, their weird alien sex lives, and how they'd kill Trover and how much he sucks.

Eventually, though, you need to take out some of those hilarious guards, and unlike Squanch Games' previous title, the too-obtuse-for-its-own-good Accounting+, Trover Saves The Universe is almost laughably simple when it comes to the action side of being an action platformer. You can jump, deal both light and heavy attacks, and roll. It's all much like the most elementary action-platforming principles in recent memory, with very few surprises or close shaves or tension until the latter hours. The only real complexity comes from the fact that the game is predominantly designed around VR. The game can be played without it, but the camera in particular is locked to fixed points in the stage and only reorients when Trover stands in a specific point along his path, allowing you to hit a button and teleport to his location. You can raise and lower your chair in-game to get a better vantage point, but the angles still aren't always where you want them to be, and it's awkward overall.

There's a telekinesis ability you pick up later to move blocks and environmental items around, and it's not nearly as intuitive using the right stick instead of your head to swing the camera around. For most of the game, though, there isn't really anything you need to formulate strategy around. Enemies are painfully basic grunts, usually taking three or four hits to go down. Shielded enemies have only one attack with a huge wind-up. Combat only gets harder extremely late in the game once enemies with body armor, who can only be taken out using Telekinesis, show up. The only real trick is getting the right perspective to see everything in the environment. You need to be diligent about this to find the extra power babies hidden around every stage, which are worth collecting; they give you extra health, and the descriptions for each are some of the best writing in the game.

Ultimately, even with all his neuroses and nonstop running mouth, Trover is the game's saving grace.

There's nothing special about Trover Saves The Universe from a gameplay standpoint. There's some lip service towards branching paths depending on decisions made during gameplay, but none of them drastically change the game one way or the other, aside from some alternate dialogue in the ending and a few extra trophies (the descriptions for which are hilarious, I might add). That leaves it to the comedy and concept to do most of the heavy lifting, much of which is very aware of its basic nature, and it makes it hard to be bored or unmotivated by how rudimentary it all is when Trover and many of the characters in the world around them are just as irked as you are at having to deal with a lot of the middling parts. Ultimately, even with all his neuroses and nonstop running mouth, Trover is the game's saving grace. The more Trover adjusts to being your sidekick, the more invested he gets in seeing this quest through, and the more relatable he becomes (even if he is, by his own admission, racist against Chairorpians). He's the guy trying to save the universe, but just so he can get back to his original plan, which is telling his boss off and getting sloshed at his favorite bar.

Essentially, Trover Saves The Universe is a really messed up alien buddy comedy. The work involved in spending time in this universe with these creatures is easy to a fault, but it's work being done with a hilarious partner who's often just as bored, annoyed, angry, or grossed out as you are. It's not the smoothest ride, but you've got the right company. 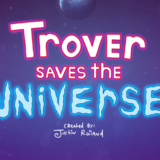 Justin Clark played through Trover Saves the Universe twice: once in VR, once in 2D. A review code was provided by the publisher.