Thanks to my efforts, there's now a basement in the Alamo. Not the real Alamo in San Antonio, of course, but the one I built in a cleft between two green hills while mosquitoes the size of Paul Reubens pestered me. You'll find the entrance just inside the main door to the left, and I've decorated it with the heads of the robots, dragons, and evil knights I've stumbled across on my travels throughout Trove's voxelated vistas. I probably would have added a guest bedroom in there, but once again, Trove's queues kept me from playing.

Yes, this is another voxel game. Even the most cursory glance at Trove's voxel-heavy landscapes and characters is enough to determine that it owes some heavy debts to Minecraft, and as with Minecraft, exploration and crafting lie at the heart of the experience. Yet these elements also allow Trove to differentiate itself from almost every other massively multiplayer game by making all zones randomly generated, and each can be accessed from level-appropriate portals in the hub world. Deserts give way to motherboardy landscapes straight out of Tron, tundra gives way to open seas where you can fish or steer a ship, and as with Minecraft, almost every bit of it can be harvested and used for crafting. Most of the time, that crafting occurs on player homes on player plots (called "cornerstones") or in a special zone for "clubs" (i.e., Trove's version of guilds), where groups of players can build their own world one voxel at a time.

One downside is that plots for the single-player homes aren't particularly large; I was barely able to get a rudimentary re-creation of the Alamo up on mine. Other players have made better work with the limitations, though, usually by going up. My favorite cornerstone was a re-creation of Sauron's tower of Barad-dûr, which shot so far into the sky that I marveled as much at the player's ability not to fall while building it as at the design. Others seem to represent Mega Man levels, as they require a seemingly endless succession of timed leaps to reach the player's health potion refill station or other service boxes. The best thing about cornerstones is that you can move them around to each new randomly generated world you visit as needed, adding both convenience and a way to show off your skills (or patience).

Trove is an apt name for the experience that developer Trion Worlds delivers. On the most basic level, it refers to the little troves of loot waiting at the end of the mini-dungeons that dot the landscape, yes, but it also calls attention to the sheer variety of displays. Collectible helmets and masks ranging from Viking beards and sombreros to baseball caps and kabuki masks seem to number in the hundreds or thousands, offering a wealth of cosmetic customization. Weapons share the same variety, with items like guns and swords running the gamut from fearsome to silly. The beauty of Trove is that many of these items are made by players themselves, making the looting experience far more rewarding than it would have been if Trion were responsible for it alone.

Assuming you've bought another class either with cash or in-game currency, you can switch between classes in an instant.

That variety affects other aspects as well. A common criticism of contemporary MMOGs is that they launch with too few classes or they don't deviate far enough from the old standbys of warrior, wizard, and rogue, but Trove suffers from neither of those problems. Its Steam launch contained no fewer than 11 classes, and since Trove doesn't really have a story, it's not hobbled with a need to stick with lore or even a half-hearted sense of consistency. It's the perfect recipe for a diverse cast. Take the Boomeranger, which pays homage to Link from The Legend of Zelda with its ability to switch between boomerang and sword. Consider the Dracolyte, which can transform into a dragon and burn the voxel landscape. Most of my time was spent with the Pirate Captain, a minion class that can toss out a massive cannon or a puppet that taunts enemies, all while his parrot companion bombards them with a cannon of his own.

Most classes thus feel wonderfully different from each other, although that couldn't have been too hard to achieve, considering that each class only gets three abilities. They're designed well, and they generally allow each class to be a tank, healer, and damage dealer all rolled into one, but this limitation means that gameplay inevitably grows repetitive with time. Some, such as the Pirate Captain, handle this better than others. On my Candy Barbarian, however, the familiar dance of leaping and executing a whirlwind attack to regain health bored me before I'd even reached level 8. That's not really a problem, though; assuming you've bought another class either with cash or in-game currency, you can switch between classes in an instant (although, as in Final Fantasy XIV, you'll have to level it separately).

A variety of enemies walk the open world if you'd like to try your skills on any ol' thing, but most of the action takes place in the many dungeons dotting the countryside. This, even more than crafting, is what Trove is all about. You fight and leap your way through a dungeon, kill the boss (which can be anything from a dragon to some formless blob), and take its loot. All of these dungeons are short, but some are impressive, especially those that require jumping puzzles before engaging a boss or those that require you to use your mining beam to dig your way to the lair.

Admittedly, with some of the more powerful classes (such as the Candy Barbarian), these are almost a joke. Trove may be an MMOG, but virtually all of its content is soloable, and boss kills (and thus personal loot drops and XP) count if you just happened to be in the area of another player doing the killing. Finding a group is usually just a matter of seeing where other players are on the map are riding over to see what they're up to. Indeed, socialization is hardly Trove's strong suit. Half the time, I forgot that the chat window was even there, and while you can join up to five clubs, joining them is often just a case of waiting for somebody to announce open invites in chat. The saving grace? Trove has a wonderful community, and its generosity usually makes up for missing features.

The best thing about cornerstones is that you can move them around to each new randomly generated world you visit as needed.

All in all, this is generally enjoyable stuff, provided you can get in. Trove has been wildly popular on Steam ever since its first appearance on the platform back on July 9--so popular, in fact, that even now, queues often leave me waiting for 30 minutes to an hour before I can get in. I once managed to watch an entire episode of Louie before being able to get back to the business of busting blocks, and that was just last week. It's especially saddening since MMOG developer Trion should be no stranger to this kind of stuff--although similar problems affected the company's release of ArcheAge last year--but it's a testament to Trove's quality that the waits don't seem to affect its popularity. Without fail, every time the queue winds down, I land in a pile of other newly logged-in players, and we rush for the portals to the explore worlds with all the joy of children newly released on the playground.

After many hours of play, that feeling still hasn't entirely faded, but I suspect I'll soon have to step away from Trove for a while to maintain it. Trove is all about the business of exploration, hoarding, and crafting, and in the absence of other MMOG standbys like story quests or PvP, the weight of the requisite repetition starts to nag just a bit past level 10. Trove does its best to fill these gaps with other options, such as leveling different classes, attempting to build a dungeon worthy of inclusion in the game, or simply collecting cosmetic items from boss kills, but for me, it doesn't deliver the kind of MMO addiction that sends me to the computer to sneak in more playtime after everyone else is asleep.

That's the beauty of the free-to-play model, of course. Should I decide to step away for a few days, Trove and its troves are right there waiting for me, just as I left them. It doesn't hurt that Trion's latest MMOG has about as benign a free-to-play model as they get, as you can amass most of the premium coins needed to buy items like new classes or new mounts fairly easily. What's more, Trove allows players to spend real cash to buy in-game gold (along with some performance boosts), but that matters little since there's almost no competition involved.

Is Trove the kind of MMOG that I'd like to spend a part of every day in? No. But it is an MMOG that I'd enjoy visiting every now and then, possibly several times a week. That's enough to make Trove a success, and its speedy updates and randomly generated worlds help make every visit feel different from the last. Now, if they'd just get those queues in line, I'm thinking about making the Alamo 40 stories high, and I don't have time to wait. 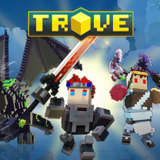 Leif Johnson is a freelance writer who has played a ridiculous number of MMOGs, and he recently started playing Age of Conan again for reasons even he's not sure of. And he likes it. For the purposes of this review, he played Trove for about 30 hours. 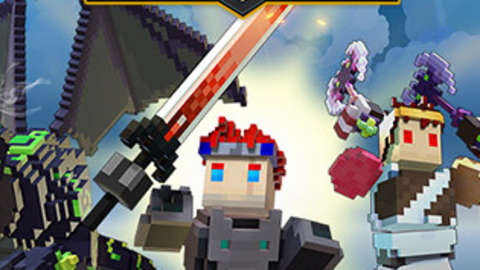 Trove is an open-ended voxel adventure through countless realms filled with quests, chests, and enemies great and small.