The political wrapper that PopTop has built around the core of the game is sophisticated enough to appeal to all types of strategy game players.

PopTop Software's Tropico is SimCity with a deep tan and an even deeper Jamaican laugh. It is Caesar with bananas, rum, and a gentle calypso beat. It is RollerCoaster Tycoon with a little mean-spirited junta thrown in for good measure. At its core, Tropico is just another city-building simulation that's reminiscent of many others before it. But the political wrapper that PopTop has built around the core of the game is sophisticated enough to appeal to all types of strategy game players. The game also has enough heart, soul, humor, and humanity to make it unique.

Most games of Tropico start with a few people scratching out a living on a small Caribbean island. You step in as their new presidente, with the background of your choice to give you a set of game-twisting traits. For instance, if you come from a moneyed background, you'll have an advantage in industry. If you're a radical student, the communists will be predisposed to support you. If you're Lou Bega--this is actually one of your starting options--you'll wow them with your nightclub acts.

Armed with your distinctive set of traits and your new bank account, you drop buildings onto the island: housing, farms, cattle ranches, churches, medical clinics, pubs, police stations, bauxite mines, fishing wharves, and cigar factories. Later on, there are power plants, casinos, cathedrals, and TV stations. And there are always the little landscaping touches, such as flower beds, trees, fountains, and the occasional statue to remind everyone who's in charge. Tropico is dazzling and can also be a little confusing in the breadth of things you can build.

Similarly, you can choose from a wide array of edicts, which are like the ordinances in SimCity 3000 or like spells in a fantasy-themed strategy game. You can arrest someone and bribe him or her, burn books to appease the church and keep the intellectuals in line, or make overtures to the United States for foreign aid. It's entirely possible to play without using the edicts, but they offer a touch of direct interaction for hands-on players. Similarly, you can influence most individual buildings if you're so inclined--you can set salaries, raise rents, or decide what your state-run TV station will broadcast.

The bottom line is, of course, the bottom line; you won't last long without setting up some sort of profitable scheme, which generally means selling cash crops or manufactured goods or attracting tourists (which is the functional equivalent to letting a bunch of extras from RollerCoaster Tycoon onto your island to spend their money). But in the end, your success primarily depends upon your people. This is where Tropico truly rises above the level of any other city-building sim. You might be the presidente, but there are a hundred or more folks who drive the action on the island. For instance, to make money from rum, you just drop a sugar farm and a rum distillery. Your construction crews show up and erect the actual structures. Then immigrants or citizens are hired as farmers and factory workers. The farmers plant sugar cane, which grows over the course of the year and is eventually harvested. Teamsters pick up the sugar and carry it to the distillery, where the factory workers convert it into rum. Then the teamsters carry it to the docks, where the dockworkers load it onto freighters. Only then do you finally get paid.

All the while, the people responsible for moving your goods along this chain are also going about their business of sleeping, worshipping, getting checkups at the clinic, buying food from the market, and paying occasional visits to the cabaret. When amenities aren't available, they're unhappy and less likely to support you. Different people have different priorities. Some people are concerned with crime, others with liberty. Some just want a nice house or a high-paying job. If they get upset enough, they'll vote against you in elections, publicly protest, flee to join the rebels, or maybe even take part in an uprising against your palace. In Tropico, money ultimately takes a backseat to people.

There's a subtle, multilayered web of cause and effect in Tropico. If you don't keep enough priests in your church, a religious general might kick up a coup d'état. If you pay the farmers too little, your lucrative tobacco trade might crumble like a dried-out cigar. If you neglect to build a school, 10 years later you'll have to pay through the nose to hire engineers from overseas to staff your power plant. If you revel in the details of a complex game system, you'll have a field day with Tropico's intricate social tapestry.

However, Tropico also has a broad range of appeal, thanks in part to its various difficulty levels, which range from a sandbox mode to sadistic realism. You can select different victory conditions for different styles of games. Tropico can also be played at any number of speeds, and you can interact completely with the game while it's paused. Casual players can crank down the political and economic factors and just doodle around with impunity, dropping buildings and watching the island grow, as in games like SimCity.

PopTop has beautifully adapted its Railroad Tycoon II engine to the sun-drenched environs of a Caribbean banana republic. The 2D graphics will look familiar to Railroad Tycoon II fans, as they feature the same sorts of gently sloping hills, rich colors, intricate artwork, and that unmistakable copperplate font for map labels. But this time around, there are thick swathes of tropical jungle and a bustling town full of animated people. This level of detail is what's most amazing about the transformation from Railroad Tycoon II. All the while, a relaxing Caribbean soundtrack blows through Tropico like a cool sea breeze; it's every bit as good as Railroad Tycoon II's rich bluegrass soundtrack. Tropico has as much character and personality as in the extremely successful RollerCoaster Tycoon.

The main problem in Tropico is its inconsistent interface. Considering the amount of detail, it's a wonder it's not more difficult to navigate. It's a mouse-intensive game that could have greatly benefited from more keyboard hotkeys. The game's interface squanders the right mouse button for map scrolling. A comprehensive almanac offers a wealth of detail but sometimes buries this detail one or two screens too deep. Some alerts are in the form of letters, but some are only voice-over warnings with no corresponding visual cue. One of the biggest interface blunders is that you're forced to make a choice about crucial elections before you can access important polling information. Furthermore, building placement tends to be more of an art than a science, particularly when you've exhausted your flat land and you have to take to the hills to expand. With no indication of how much flattening will have to be done when you put a building on a slope, you can inadvertently spend 10 years building a simple house.

Although the game's random-scenario generator has a lot of flexibility, the eight scenarios that ship with Tropico are particularly disappointing for their lack of interesting scripting. Also, since there's no included scenario or map editor, Tropico's longevity relies exclusively on its random scenarios. However, the random scenarios would have been more satisfying had they given a better sense of accomplishment after playing. As it is, you get a verbal briefing of your performance and a high score on a list. There's no record of what sort of scenario it was, who your dictator was, or how your people felt about you when it was all over. Tropico is steeped in detail, so it's a bit of a shame to see it all fall away when the game ends.

All the information available in Tropico about your economy, your citizens, and your society as a whole is a welcome change from games that insist on running things under the hood. The thorough documentation leaves very few questions unanswered. When you hold the mouse over a piece of information, an excellent in-game help system spells out how it relates to the game's mechanics. The numbers and graphs are all there at your fingertips, but they're not overbearing. Tropico is as complex as you want it to be.

After an experiment as bold as Lionhead Studios' recent Black & White, Tropico is exactly what strategy gaming needs: a reminder that a game doesn't necessarily have to be weird, inscrutable, or unconventional to be great--it can get by on charm, broad appeal, and sophistication. Most everyone will find that Tropico is a real pleasure to play because of these qualities. 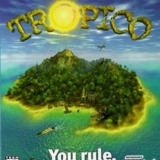