Tropico 4 is a likeable and engaging sequel that expands on its predecessor but doesn't offer much new depth.

Tropico 4 is a bit like Fidel Castro. Although similarities between the two aren't so great that the CIA will be sending the developers at Haemimont Games a box of exploding cigars anytime soon, the two share the same philosophies about change. Just as the Cuban dictator seemed to spend his entire 50 years in power wearing green fatigues, an army cap, and mirrored sunglasses, the latest addition to the series of banana republic simulations comes dressed in nearly the exact same getup as its predecessor. Tropico 4 is another likeable and engaging take on Cold War city building in the tropics, but it looks, feels, and plays much the same as 2009's Tropico 3. El Presidente is resting on his laurels this time around.

First impressions are not good. Series veterans loading the game up for the first time can't help but be shocked at how little has been added in the way of new features. If anything, Tropico 4 seems stripped down in comparison to its predecessor, at least at first. The opening cinematic is a dull balloon ride over an island instead of the military assault previously featured, and your first mission is noteworthy right away, with the omission of goofball DJ Juanito. It's hard to figure out why this first-rate bootlicker was removed from the game because his nonstop (if repetitive) quips gave Tropico 3 a lot of its personality. The music is still a peppy mix of Tito Puente-ish Latin rhythms, and the visuals are a slightly upgraded yet cheerful splash of Caribbean color that make even run-down shacks and tenements seem somehow appealing. Nevertheless, the game seems a tad lifeless without Juanito chirping propaganda in the background. New announcers have been added, along with comments from members of citizen factions, but the script is so bland that you only wake up to take notice of what's being said when somebody utters a hot-button word like "rebels."

Gameplay has been structured along second-verse, same-as-the-first lines. The structure mirrors that of Tropico 3 very closely. As before, the game is solo only, with a 20-scenario campaign where you play itinerant dictator El Presidente, as well as a sandbox mode. One-off challenges made by users are available through an in-game browser as in the last game. Support has been added for Facebook and Twitter updates, so you can brag about your banana farms or something, but that's as close as you're going to get to true multiplayer action. Still, the missions are lengthy and feature loads of layered objectives. So there is a lot of content here, even if the continuing lack of more conventional multiplayer might turn some people off. No matter how you play, you have total control of a series of islands with different features, resources, and weaknesses like local volcanoes and earthquake fault lines (natural disasters have been dialled up in the new game to be an ever-present menace). You can play as an absolute tyrant, ordering assassination, stuffing people into prisons, and rigging elections. Or you can be a benevolent strongman who plays fair at election time and promotes freedom with TV stations and uncensored newspapers.

The setting has been shifted from a metropolis to a cartoon Cold War dictatorship. Building a happy, healthy island that doesn't revolt requires feeding people, employing people, entertaining people, and preaching to people. So you continue to build farms, health clinics, factories, bars, cinemas, cathedrals, power plants, and so forth all to keep your people from sticking your head on a pike. Politics remain a huge dimension of the game and have even been bumped up in importance this time with the addition of a cabinet. You appoint islanders or bring in foreign experts to serve as ministers of portfolios like the interior, foreign affairs, and the military. If you don't have these experts in place, you cannot issue policy edicts. Even though this is an interesting idea, not enough is done with it. This added layer of management merely forces you to spend money on constructing a ministry building and then hiring people before you can click on edicts, which are largely the same as in Tropico 3.

Factions play a bigger role than before. Instead of the anonymous rabble-rousing capitalists, commies, environmentalists, nationalists, and the like from the last game, Tropico 4 assigns each group a leader with specific demands. So instead of just looking at the almanac to see that the tree huggers aren't thrilled about all of your clear-cut logging operations, you now get the likes of Sunny Flowers barking in your face about stopping logging and building a wind turbine. If you do what these goons ask, you earn respect and other bonuses. If you ignore them, their happiness drops. Foreign powers get into the act, too. While the US and the USSR remain the only two superpowers with the power to topple you or hand out aid, you're forced to deal with the EU, China, and an anonymous Middle Eastern Arab country. These other nations act just like the factions. Kooky stereotypes like a foppish Brit, a US senator who looks like Tricky Dick, and an Arab who's the spitting image of Yasser Arafat regularly pop up onscreen with demands for cash, exports, policy changes, buildings, and so forth.

This new system both personalizes the game and brings missions to the forefront. Now, you know what you're supposed to be doing at all times. In a way, the game kind of takes you by the hand because the factions, nations, and even foreign businessmen you occasionally partner up with give you so much direction. This comes with pluses and minuses. While these nudges make the game easier to play--and a real treat for city-building newbies--they also make the missions seem a little more linear than you'd expect in this genre. One word of warning, too: All of these characters are played very broadly. Those easily offended should probably close their eyes when the buck-toothed Asian guy appears. Still, it's hypocritical to take offense at a game like this, which is actually very dark when you stop to think about what you're doing. If your hackles are raised at things like racial stereotypes out of old Bugs Bunny cartoons, you probably shouldn't be playing a game that lets you portray monsters like Papa Doc Duvalier.

Economics have been expanded as well. Instead of just exporting goods to the docks and over the horizon, you can now import them. All of the items in the game, from raw goods to finished factory products, can be viewed in a new section of the almanac. Just a few clicks there allow you to open yourself up for business. This might be the most successful new tweak in Tropico 4, although even it doesn't alter things much. The main change that it introduces is the ability to run your islands like low-wage sweatshops. Instead of producing and gathering raw goods, like wood or iron on your islands, you can now import the stuff and turn it into pricey finished goods like jewelry, furniture, or even weapons. In an odd way, this is the creepiest aspect of the entire game because even assassinating foes isn't quite as icky as exploiting poor people to make cheap goods for spoiled Westerners.

Unfortunately, none of these additions really alter how you play the game. Missions still roll out the same way, with you building the same old of farms, clinics, churches, schools, tenements, and police stations, often in the same order. A handful of new buildings, like an expanded range of tourism attractions that include aqua parks, offer a bit of variety, but they make so little impact that you find yourself constantly asking, "Hey, wasn't that in the last game?" Repetition is a real problem. As compelling as the game can be at times, with such vibrant islands, a great sense of humor, and easy-to-master mechanics, you fall into a rut and find yourself repeatedly building the same islands. Many missions run well over two hours in length, too, forcing you to sit there and watch as counters run up to reach winning objectives like set numbers of exported goods or online followers. This can get very frustrating because you can often see that you're going to win a good 30 or 40 minutes before the goals are completely fulfilled.

Tropico 4 has gotten broader but not deeper. While the tweaks to the economy, government, and mission assignments make it a better game than its predecessor, you go over the same old ground too often. Still, these changes make for a marginally better game, and newcomers to city building should find the game very easy to get into, thanks to the mission structure and constant advice. But, most of these improvements would have served a stand-alone expansion or an add-on pack much better than a full sequel. 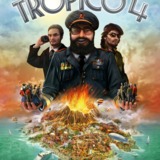 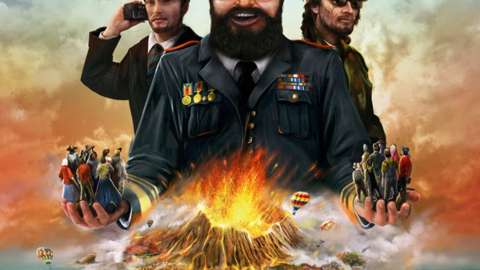 In Tropico 4, you will return as El Presidente, the tyrannical or benevolent dictator of the island paradise of Tropico.