TRON: Evolution mixes free-running platforming with simple but engaging combat and is a fun if slightly repetitive trip back into the digital world of the Grid.

The silent system monitor known simply as Anon runs through the computer world of TRON: Evolution like a leather-and-neon-clad Prince of Persia, smoothly defying gravity in a digital display of free running. This movie tie-in title, too, shows some deft touches, mixing up extended sequences of wall jumping and chasm leaping with combat that's appealing if a little simplistic. It doesn't quite have the gameplay or visual variety to battle off feelings of repetitiveness, but for the most part, TRON: Evolution is a smooth ride through one of science fiction's best known worlds.

TRON: Evolution doesn't tell the story of the new film, TRON: Legacy, but instead, it acts as a prequel, bridging the narrative gap between the original film and its sequel. The hero of the first movie--Kevin Flynn--now lives full time inside the computer world of the Grid, and it's a rocky time for him and the Grid's digital dudes. A new form of sentient life has appeared--the Isos--and many existing programs are distrustful of the new race. An aggressive virus led by the villain Abraxas is also sweeping the world, turning both programs and Isos alike into nasty, green-tinted creatures with an unexplained penchant for dreadlocks. You play through this corrupted code base as Flynn's trusted system monitor Anon, a completely silent avatar that lets his acrobatic moves and light disc carry him through most conversations. As a mute protagonist, Anon doesn't do much to pull you into the story of TRON: Evolution, and the narrative itself isn't that intriguing. Fans of the TRON universe, though, will get a kick out of references to the original film, and all of the voice actors (including an impressive Jeff Bridges sound-alike) do a good job of bringing the Grid to life.

Anon's only real expression in the game is through his actions, and when it comes to movement, Anon has a wide vocabulary. The system monitor is extremely nimble, and tight controls make it easy for you to take him on extended acrobatic runs along walls, over environmental hazards, and across wide gaps. Free-running takes up a large chunk of TRON: Evolution, and when you get on a smooth run, it's fun to take Anon though some seemingly impossible obstacle courses. The controls do a good job of making you feel like you're in charge of Anon's every movement, and when you do miss a jump or a ledge, you always feel like it's due to your own lack of skill rather than any control failing. That said, the challenge here isn't particularly hefty; there's never any confusion about which path to take as its clearly delineated via conveniently placed markers, the puzzles are all rather basic (find all the not-at-all hard to find switches to open a door), and there are only a few truly difficult platforming sections to clear. Even the tough sections won't bother most, thanks to TRON: Evolution's extremely generous checkpoint system. A mistimed jump usually results in instant death in the Grid, but frustration never gets a chance to set in because you're only a few leaps away from a save.

Combat is much like platforming; fun but light when it comes to challenge. Anon uses a light disc, a projectile weapon that gets imbued with different properties (such as more damage and the ability to explode on contact) as the system monitor gains levels. As you'd expect from one of the most iconic weapons in science fiction, the light disc is an effective damage dealer, and Anon wields it with a lot of panache, flipping, twisting, and twirling acrobatically with every combo. There are several combos available, but you can get through the game using only a few because most enemies don't offer much in the way of resistance. Some enemies near the end of the game do put up more of a fight, but for the most part, numerical superiority is the only advantage your foes have, and even that is diluted by the fact that health strips (sections of a wall that Anon can run across to regain health) are in plentiful supply throughout the Grid.

Easy as it might be, there's still some fun to be had in traversing the world of TRON: Evolution, even if the action gets a little repetitive about halfway through the five or six hours that the single-player campaign takes. Free-running routes seem to be echoed and enemy encounters start to blur, but to its credit, TRON: Evolution breaks up this flow with the occasional ride in a light tank or light cycle. Of the two, the light tank sections fare better, purely because of the wanton level of destruction you're able to cause when at the helm of this bulky vehicle. Light cycle levels, on the other hand, are dull, providing little sense of speed and even less challenge. Forget about the crazy 90-degree turns and edge-of-your-seat manoeuvring light cycles are best known for--these sections are simple point-to-point runs where the only challenge lies in avoiding fast-approaching obstacles in your path. For PlayStation 3 owners, you can use a Move controller to play through these light cycle sections by holding the Move on its side and steering it like a handlebar, but it feels far less responsive than sticking with a controller.

The only place to get some true light cycle action is in the game's online multiplayer. Up to 10 players can compete in TRON: Evolution's variants on classic Deathmatch, Team Deathmatch, King of the Hill, and Capture the Flag modes, with four maps available. Two of the maps are small, while the others are larger and have both light cycles and the occasional tank available. Although you're not forced to use vehicles on the larger maps, matches on these typically end up being light-cycle-heavy affairs, with the ability to do quick 90-degree turns that force enemies to crash into your trailing light barrier making for a haphazard, fast-paced, and fun experience. But even on the smaller maps, the multiplayer in Evolution is enjoyable, if a little limited due to the small number of modes and maps on offer.

TRON: Evolution is a good-looking game, but like its gameplay, it suffers from a serious case of sameness. Anon and the various friends and foes he encounters all look good decked out in leather and various shades of neon piping, and Anon moves with an attractive fluidity. The way the system monitor leaps and lunges from platform to platform, shifting his weight and moving his limbs to gain momentum, is impressive to watch. The various environments of the Grid, though, all look rather similar, despite the different cities and locales through which the game moves. Tron City, Arjia, the Bastrum Colony, and even the innards of a gigantic ship all seem like they're the same place, albeit with different dominant color schemes.

You don't have to be a fan of the TRON universe to enjoy Evolution. Running through its digital world provides plenty of fun, and while its combat isn't too taxing, there are still enough good moments to make the experience worthwhile. It may lose steam well before its downbeat ending, but TRON: Evolution is a still worthwhile trip into the realm of the digital. 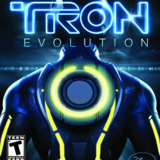