Triple Play 99 is the way to go if you want a realistic baseball sim to play.

With baseball season right around the corner, everyone has been itching to play some baseball games. But deciding which game to play is bound to be just about as confusing as picking out the best basketball game. Some prefer the arcade-type action of Sony's MLB, while others prefer the simulation feel of Triple Play. And while this year's installment of EA's baseball sim isn't dramatically different from the previous installment, Triple Play 99 offers more of what people loved about Triple Play 98 - details.

All of the teams are represented, including the two new expansion teams. Over 1300 actual MLB players are included. Triple Play 99 has a lot of the same options and features that were in last year's Triple Play plus a few new ones. Some of the best maneuvers include scaling the wall and robbing someone of a home run and running down a bunt and picking up the ball barehanded then throwing the ball in one motion to beat the runner. My favorite of the new abilities is easily the home plate collisions. Just mash on the X button when running for home, and you'll barrel through the catcher if it's a close one.

Visually, Triple Play 99 looks like most 3D polygonal games - boxy players that look kind of funny but move totally realistically. The animations of the players are really good, and there are lots of them. The frame rate is the only knock that Triple Play 99 gets graphically, as was the case with last year's installment. EA has done something to dress the visuals up a bit with the addition of the action camera. With this option turned on, the camera view is ever changing and seems to have more of a TV broadcast feel. The two announcers, Buck Martinez and Jim Houston, really make you feel as though you are watching a game on TV. The commentary that the two announcers give out consists of play-by-play calls, funny stories, and facts about players and teams. My absolute favorite is when the announcers do a fake ad for Ray's House of Pencils or one of the other products that usually also have an ad hanging from the scoreboard or outfield wall.

The sound as a whole is really very good. You can often hear, under the chatter of the announcers, a vendor in the crowd yelling that he has popcorn or a fan yelling in disgust about his favorite team's poor performance. Every once in a while you'll hear a stadium announcement about someone's lights being on in the parking lot or something. It's all of these little extras that make Triple Play 99 feel more like a baseball experience than just a game. Probably the best little extra in the game, which was also one of the highlights of last year's Triple Play, is the trivia game. Instead of watching a boring loading screen, the game has a trivia question that either asks a "Who Am I?" or a "What Year Is It?" question, where you get three clues to help you figure out what year it is. The answer then appears after a few moments when the game has been loaded.

Triple Play 99 is fairly easy to learn but hard to master. The game features four different difficulty settings - beginner, rookie, pro, and all-star. The difference between the four is more than just tougher computer opponents, it also changes in-game parameters. For example when playing on the beginner difficulty setting, fielding and base running are automatic. This allows first-time players to jump in and get a feel for hitting and pitching at a very slow speed. The rookie difficulty steps up the speed of the game, computer AI, and most noticeably changes the pitching so that you can move the ball as it flies toward the plate. Pro mode graduates players to the big leagues. Base running and fielding are up to you now, the computer becomes quite a bit more intelligent, and the game speed steps up as well. This is where most people will find themselves playing - the computer plays smart and the game speed seems about right. The all-star difficulty is for really experienced players. It's much like the pro mode, only faster, and insanely difficult. Besides the usual modes of play like season play, play-offs, and single game, Triple Play 99 features a home run derby that lets you see just how many you can knock out of the park. Speaking of parks, Triple Play 99 features all 30 of the real MLB stadiums. The stadiums look exactly like their real-life counterparts, and there are even some hidden ones as well.

Triple Play 99 is the way to go if you want a realistic baseball sim to play. It is really the most fun I've had playing a baseball game in a long time. The improvements made over last year's version mean that MLB '99 has its work cut out for it. 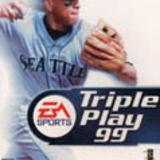