You can save the Netheruniverse from floating sushi, but not always from repetitious dungeon crawling.

The cast of Trinity Universe is a rambunctious one, pulling you along through their adventures with sheer manic energy. The force of their combined personalities is as over-the-top as many elements of this game: the world, the items, and a myriad of character enhancement options. A weak narrative arc and rote dungeon exploration drag down your time in the Netheruniverse, and the gameplay feature list becomes top-heavy, but if you're a fan of Disgaea-style insane character upgrades and bottomless dungeons, you'll find plenty of that here.

The characters are a mash of originals that appear next to fan favorites from the Atelier and Disgaea worlds, thrown together in such a way that they retain their own motivations but still come together under a common goal. Alchemist Violet just wants to synthesize new items, fallen angel Flonne will deliver justice and love to the universe even if she has to beat it into submission, and Etna endlessly seeks the most perfect dessert in existence. They all find reasons to fall in with the main heroes, who are dedicated to protecting the drifting land of Empyria from the threat of a mess of weird items falling from space. Demon dog Kanata was fated to transform into the Demon God Gem and save the world, but he has skipped out on the original plan and instead wants to beat back the descending objects as they come, while enjoying a variety of delicious snacks. The valkyrie Rizelia comes stomping in and swiftly attempts to impose order by trying to force Kanata to accept his fate while researching the cause behind televisions, convenience stores, and ominous pieces of sushi threatening the safety of space.

Many of these drifting objects can be entered as dungeons, and that's where the bulk of your energy is directed in an effort to drive these items from orbit. Virtually every dungeon has a gravity core that, if destroyed, will jettison that particular oddity back among the stars and away from Empyria. School desks, traffic cones, and billiard balls are as dire as buildings like libraries and ruins, which in turn hover among deadly donuts and sinister shortcake. Given the schizophrenic variety of looming dangers, it's somewhat disappointing that the majority of the time you're running around fairly generic ships, structures, and ruins. In fact, you end up in the same handful of dungeons a number of times to plumb supposed new depths--which are essentially identical to the depths you plumbed in a previous chapter, but now the hallways are longer. Given that your basic options in each are to discover the one or two hidden treasures, find the gravity core, and fight enemies, the main narrative is stretched thin over a relative few objects.

Each drifting item is lousy with monsters that you need to defeat. The main battle currency is action points, and each character has a variable number that depends on his or her gear level. There are three basic attack types: rush, mighty blow, and magical. You can string these attacks together in whatever order you like so long as you have AP to spend, and the members of your party have their own specific combinations that result in special attacks. You can chain your turns together so that the individual attacks all count as one total, and if you meet special conditions, you can trigger special combos between characters as well as a mighty EX attack. The numerous options are inadequately explained when they're introduced, and you can take full advantage of them only when you have a ton of AP that you either hoard between turns to build up or innately possess from gear. This means that in the early going you do a lot of slogging around in battle, performing the same miniscule attack combinations or wasting turns to eventually unleash something a bit more powerful. Once your gear and levels catch up, battles become a whole lot more satisfying and varied.

To raise your levels and improve your gear, there are a number of enhancement options in addition to experience earned in battle. Violet makes available item synthesis, which lets you turn your wealth of dungeon treasure into more powerful weapons, armor, and accessories. Rizelia can craft meteorites--special stones and abilities to slot into those stones--that you can create from loot to increase stats like attack, speed, and defense. Kanata can create monsters from found items, which you can then fight to earn experience and special items that will directly boost certain stats. Managraphics are artistic designs etched into your weapons, which imbue them with special properties and allow for the collection of mana from monsters, which can then be used for the creation of other things. That's four separate methods of character enhancement, all of which rely on dungeon drops and monster loot, and all of which require specific items. It's madness, and the fact that there are so many avenues to explore makes them all feel slightly superfluous, especially since you can purchase ready-made items from the stores as well. The good news is that you can get by even if you barely fiddle with all of this nonsense and use just what you happen to acquire during normal play. If you want to go all out and hunt materials for the multiple upgrades available, your party will quickly become a group of unholy badasses. That's a good feeling, and it helps speed up the battle flow to make exploration more enjoyable.

Some of the drifting objects can be invaded for treasures, but others serve as the stage for story events that can be triggered during your journeys. Dialogue takes place accompanied by detailed character art that subtly shifts as the characters speak and gesture about. The designs are attractive, but the constant motion of the images can be a little distracting, and you occasionally get the impression that someone's head is going to just slide off his or her shoulders. Often these are events tied to the main story, but you also find a number of scenes that exist to allow the cast to play off each other, which is what they excel at doing. Not all the humor plays well, and not all the voices are enjoyable to listen to, but the dialogue pokes enough fun at itself that the character interactions remain a real highlight. The 3D models for the characters are pretty basic, and the animations for characters and monsters are adequate instead of intricate, but there are a few monsters that look impressively imposing. All the special attacks have a lot of flash to them, and the managraphics you possess will cause your blows to cascade objects like stars, teddy bears, or candy depending on what you have inscribed. The dungeons themselves range from pirate ships and high schools to libraries and floating ruins and in some cases possess nooks and crannies that are determined to hide treasure from you. Each dungeon type has its own theme, and the Trinity Universe main theme is a catchy tune that reminds you not to take things so seriously.

An individual story arc can be completed in about 25 hours, and if you want to see the full spread of events with both narrative paths, you can easily spend in excess of 40 hours roaming the Netheruniverse. There's one particular foe who drives matters to their conclusion, but he refuses to explain why exactly it is he's doing what he's doing. As a result, even if you complete the game normally, there's a huge unknown component that does not get resolved in either Kanata's or Rizelia's campaign. If you want to discover what the deal is with the floating objects, you have to perform a bunch of side objectives to get the "true" conclusion. While Kanata's ending pulls at least a few threads together and gives you a little epilogue after you finish, Rizelia's ending is abrupt and disappointing. It's a shame that the game wants you to jump through hoops to get a truly satisfying resolution, particularly after investing so much time. The silver lining is that a clear file allows you access to every item you've bought, synthesized, or otherwise acquired in your previous game, so you can embark on a new adventure quickly and quite easily--just be prepared to read a FAQ.

The true advantage of Trinity Universe is that the experience is only as insane as you'd like to make it. You can plow through the main narrative without touching many of the upgrades, or you can take your time to harvest materials and build your group up to ridiculous proportions. The standard dungeon crawling and the narrative disappointment are balanced by characters who mostly are concerned with food and blowing each other up over paying any real attention to what they're ultimately trying to accomplish. If you're like them and can find the joy in character upgrades and exploration over all else, then certainly give this whimsical role-playing game a look. 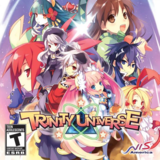 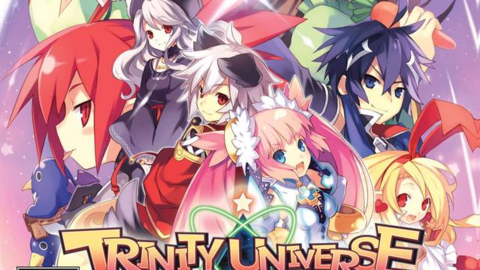