With the wholesome appeal of a fairy tale, Trine 2 is unapologetically packed with comfortable tropes. Like the first game, it stars a trio of classic fantasy heroes: a merry knight, a sly thief, and a nervy wizard. Their adventure bustles them through ye olde tale of rescue the princess--via enchanted forest and murky cavern, wherein they thrash goblins and giant spiders. But out of that conventional premise, the game conjures a gorgeous and gratifying platform puzzler.

Trine 2's environments could have been lifted off the screen of a latter-day Fantasia. Deep, richly detailed levels pop with lively, luminous color. The forest is home to luscious glowing foliage and glistening colossal snails. Gloomier levels house oversized spiders, animated with skin-crawling authenticity. One level, taking in sunset on a tropical beach, is stop-and-stare beautiful. The hero character models are very slightly less crisp than in the PC version, but that nitpick is dwarfed by the general visual loveliness.

Each hero has a simple, distinct set of powers, and the controls for each are pleasingly intuitive, making smart use of the triggers and right analog stick. The knight has a sword and shield for fighting, as well as a warhammer for smashing obstacles; the thief has a grappling hook, along with a bow and arrow; and the wizard can levitate items and summon boxes or planks from thin air. In single-player mode, only one hero appears onscreen, but you can instantly flip between them to access the powers demanded by the task at hand.

The wizard's conjuring powers make him the best suited for solving a puzzle on your own. Though the basic platforming is smooth and accessible, with combat that is brisk and straightforward, the heart of the action is physics-based puzzling. At its simplest, this means constructing a ramp from crates, while more complex challenges have you reroute steam jets by hovering segments of pipe into place. In others, you channel water onto the roots of plants that shoot up, magic beanstalk-like, to create leafy new platforms on which to hop. New elements such as movable portals, waterwheels, and lava streams come thick and fast, in addition to memorable one-offs, such as a house-sized frog that lassoes giant fruit with its tongue.

Though many of the puzzles suggest single, efficient solutions right off the bat, some of the best fun is to be had experimenting with the physics and looking for less-obvious solutions. Trine 2's physics engine is robust and fine tuned, and noodling about with it is engrossing in its own right. The game is generously rigged to allow for the guilty pleasure of fudging a solution when the elegant answer is out of reach; teetering structures of magic planks can be used to bypass clever gate mechanisms altogether or the same planks can be jammed gracelessly into the gears.

Trine 2 prefers to keep you moving briskly along to holding you up with a real brainteaser. There's even an optional hint system that kicks in after a few minutes of head scratching. It amounts to a friendly game but not an overly easy one; there are much trickier secrets to be found and collectable experience orbs in hard-to-reach spots, with the latter feeding into a simple set of talent trees. For instance, as you level up, the thief can upgrade to fire or ice arrows, the knight can upgrade to a charging shield bash, and the wizard can learn to materialize more boxes at once.

In local multiplayer, or in the online multiplayer that's new to this sequel, your two co-op companions play the other two characters. This lets you combine powers rather than flit between them, although hero swapping on the fly is also permitted. Combining powers opens up new avenues of sandbox tinkering; the wizard can float other party members on a conjured plank platform or hang a goblin harmlessly in midair for the thief to skewer with arrows. For maximum sandbox tomfoolery, there's also an unlimited mode, in which any combination of hero characters is allowed.

The storybook-style narration is genteel, and the heroes are amiably voiced. The music is rousing, too. Here, as with story and setting, Trine 2 cleaves comfortably to the genre, with all of the cheery piping of a high-class Renaissance fair. If you bypass secrets and ignore experience orbs, you can breeze through a single-player campaign in six hours or so. Although Trine 2 wouldn't outstay its welcome at twice that length, it's no raw deal, given the modest pricing (1200 Microsoft points). This Trine follow-up is a more complete, refined work than its predecessor, and those who didn't catch the original are in for a real treat. 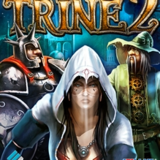