This game falls directly into the perfect-for-a-rental category, and it ultimately proves that you need more than great graphics to make a great game.

"Excuse me little girl, I have to borrow your... hoverboard?" The famous scene from Back to the Future II may have inspired the realization that someday you won't need wheels or snow to hop on your board and perform some radical stunts. Well, that day has come with the arrival of TrickStyle - a futuristic racing game that lets you stand atop a floating board with a thruster on the back. But while the premise and physics are a little refreshing, TrickStyle doesn't do a whole lot of revolutionizing and ultimately ends up being a disappointment.

Instead of bogging you down with menus, TrickStyle simply has you choose a racer and a board, and then puts you into a main staging area called the Velodrome. From there, you enter into different rooms to select the challenge you're going to tackle next. The game is divided into two different tasks - challenging the Velodrome trainer to unlock new tricks, and racing the tracks to unlock new areas and boards. The challenges usually have you run through a series of gates in the Velodrome before a timer expires. Once you're done, you can opt to move to the next race or return to the dome for some practice. After the third challenge, you'll be sick of the limited space inside the Velodrome and wish you simply had a menu.

The racing tracks are spread across three different continents - Japan, the USA, and the UK. Once you have raced the five races on each continent, you'll unlock a boss race, which usually isn't a race at all, but a Velodrome-like challenge. Beating these will unlock new hoverboards for you to race with. Unfortunately, the racing tracks are really tightly spaced, making collisions with other racers almost inevitable. And since the outcome of collisions are determined by one stat - strength - I found that racing with any but the three bully racers was almost impossible, since the computer-controlled characters would repeatedly knock into you and cause you to wipe out. Apparently, the developers couldn't be bothered to come up with any sort of creative name for any of the tracks, as they're simply designated by a number. And while the track design is creative, there are few tracks to choose from. The game boasts a total of 18 tracks, and more than four of them are tracks you've already seen before backward.

TrickStyle has everything you would expect from a boarding game - rails, ramps, loops, impossible jumps, 1080-degree spins - it's all here. Unfortunately, for a game with the word "trick" in its title, the tricks in this game aren't really that eyebrow-raising. Most of the tricks are way too easy to accomplish. Although landing a 1080-degree spin in real life is impossible, all you have to do to complete a 1080 in the game is pound on the X button until you land. I also found that most of the tricks suffer from a drastic delay - between the time you input the command to perform the trick and the time your boarder actually attempts it. This makes stringing more than two or three tricks together impossible, and gone is the sense of the extreme, rapid-fire tricks. What is a bit refreshing, however, is how accurate the physics are for technology that hasn't been invented yet. Your hoverboard is a single-engine, rear-powered vehicle, making it control much like a jet ski. Braking does almost nothing, and turning without acceleration has little effect. Graphics are definitely TrickStyle's biggest asset. Simply stated, there's never been a boarding game that's looked as good as this game does. The tracks, backgrounds, and board effects all look great. From the start of your race, you'll be able to see everything ahead of you, with almost no pop-up. The track design is inventive and shows off tons of different textures and objects. However, the racers themselves seem a little too inhuman - the movements of all the boarders seem a little forced, and the trainer himself looks nothing like his drawing. The win/lose animations are the same for every racer in every race, and each boarder does every trick the same way.

The sound department has me caught in a cross fire. The soundtrack is chock-full of outstanding techno, but the sound effects are trite and unappealing. In the race mode, the game gives you an audio signal every time you pass or are passed by another racer. This bogs the techno down with unnecessary and repetitive character taunts. It's enough to make you mute the race mode sound effects altogether.

It's the little things that make TrickStyle suffer. It's way too easy to perform the tricks, and there are only two or three tricks worth doing in the stunt challenges. Also, no matter what you do, you'll always answer to the trainer at the end of your session - if you beat a race, he'll be there to congratulate you, and if you lose a race, he'll be there to encourage you. This ends up being a little tedious because he says the same lame thing almost every time. I've had better pep talks from my Peewee football coach. TrickStyle's biggest problem is that it's too easy to beat. I completed all the challenges, placed first in all the races, and even played around in practice mode in less than seven hours. Once you've run through the game, unlocked all the tricks and boards, there's really no reason for you to play it again. The stunt mode was obviously replaced with a practice mode, where you run around the Velodrome without any sort of time limit, performing stunts and racking up a score. This is fun for less than a minute. In addition to that, there's simply nothing of value for you to unlock. Even if there were alternate racers, it's not like you'd play again, since the only racers of value are those who can knock about the other players. Once you beat the only difficult track in the game, the Velodrome trainer says, "I never thought you'd beat me! Here, I have a surprise for you." And that surprise? The credits.

Want to take TrickStyle with you? Just download the minigame to your VMU. But don't expect to be doing any gnarly stunts while on the bus, because TrickStyle Jr. is in fact Snake (also known as Worm) - the game you learned to program on your Apple II back when you were a kid. Don't ask me how leading a line to a pixel without hitting walls or your ever-growing tail can be considered even remotely like TrickStyle - unless you're talking about how unengaging they both are.

TrickStyle has a very Wipeout XL feel - a futuristic, hover-race environment with nifty techno-script symbols and a soundtrack stacked full of electronica. However, TrickStyle fails to deliver the same sense of speed Wipeout was so famous for, and it ends up leaving you playing just another boarding game. It's easy to tell where Criterion cut corners - in the player animations, sound effects, and the backward tracks. Without any sort of timed stunt course, the tricks you learn from the challenges aren't compelling enough to make you want to fly about the Velodrome any more than you have to. This game falls directly into the perfect-for-a-rental category, and it ultimately proves that you need more than great graphics to make a great game. 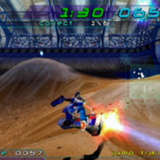