TRI: Of Friendship and Madness Review

Prancing on the ceiling.

There's a peculiar harmony to TRI: Of Friendship and Madness: though seemingly natural, it's meticulously authored. It's a physics-defying obstacle course overlaid with vibrant color and spectacular tribal tunes, the beautiful byproduct of left-brain sensibilities keeping task in a surreal playground of right-brain creativity--as if M.C. Escher had resolved to make real his creations during a peyote-induced spirit walk. It's a place of impossible possibilities and well worth the lengthy and demanding visit.

As I took my first inverted steps onto the ceiling of an expansive temple, slowly following my carefully constructed path of triangular stepping stones, I had my moment. It's a moment I imagine everyone experiences early in Rat King Entertainment's first-person puzzler--when you shatter the laws of the universe and do the impossible, finally realizing the full extent of the TRI's creative power.

The TRI artifact is the titular crux of the experience, the source of power, allowing you to craft triangles by anchoring three points on nearly any surface. It's a simple premise strategically refined for endless possibilities: as platforms to span gaps and cover hazards, as a gravity-free walking path up walls and across ceilings, and as a way of impeding and reflecting the flow of light, to name but three of its many applications. These powers and ways to interact with the environment are slowly incorporated into your bag of tricks across TRI's sixteen levels. And while the open-world nature of each stage certainly encourages exploration and experimentation--reinforced through unlockable bonus-content collectibles tucked away in deviously hard-to-reach crevices--the invisible guiding hand of smart design is always thoughtfully at work behind the scenes.

In each level, three fox statues must be reached, collected, and returned to a central altar in order to progress. These objectives are carefully laid out, but the means by which they're achieved are entirely up to you. It's a careful balance of focused obstacles and creative problem solving that encourages a sense of triumph with every temple successfully delved. Once completed, levels may be returned to in pursuit of a better performance; and through a challenge mode tethered to every stage, you're free to put up your best completion time against the community, attempt to use the fewest number of triangles, or collect everything there is to find.

Pushing you between these environments is a serviceable story centered on a schism between the Odd Gods, deities in the form of foxes. Though each short cutscene interspersed between levels is beautifully illustrated with artful style, I regularly found myself fighting to stay engaged with the slow-drip narrative delivery--a symptom of the comparatively dense levels often requiring an hour or more to fully explore and complete. Short spurts of exposition and glimpses of the otherworldly critter roaming each temple do help to mitigate the imbalance between gameplay and narrative, but the ultimate story I found in each sprawling environment was that of my own victories of ingenuity.

And while the vast majority of TRI is cleanly realized, slight technical hiccups and moments of finicky collision punctuate the experience. For example, crates and other objects held in-hand will often spasm and orientate strangely after slightly bumping into the environment--a particular nuisance when trying to maneuver them between rooms through tight hallways or tunnels. Yet such issues are minor, and rarely overshadow the core tenets that make TRI great.

Rat King Entertainment has laid impressive claim to the first-person puzzle genre, deftly filling the vacuum created in the years following the Portal series. And perhaps the fact that TRI is so reminiscent of that famous experience--the simple mechanic used to great, creative effect--speaks for itself. Yet where Portal was exacting, linear, razor-focused and narratively driven, TRI is an open, dreamy experience, propelled by exploration and personal conquests in playful jungle gyms.

Regardless of comparisons, TRI: Of Friendship and Madness is a fantastically executed return to the well of first-person spatial tinkering. Despite minor blemishes and inconsistencies, it offers up task after engaging task, only ever telling you where to go, never how to get there. And soon after stepping foot into its world, you'll learn to defy the laws of nature, and beat it at its own trickery--then, you'll be thinking with triangles. 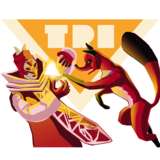 Brandin Tyrrel never thought he would find another first-person puzzle game as engaging as Portal. Yet, as he discovered over a dozen hours with TRI: Of Friendship and Madness, mind-bending mechanics and smartly designed puzzles are alive and well. 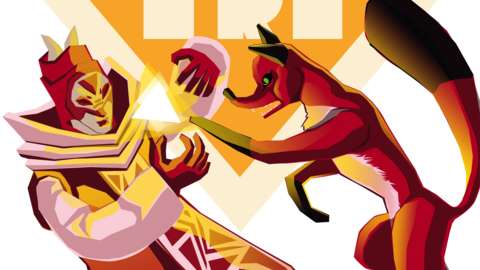 In the world of the Odd Gods players experience a mind-bending first-person adventure like no other as they discover the magical power of the TRI.