Trauma is an overpriced collection of panoramic photos with grossly shallow gameplay, wedged into a pretentious shell of a story.

As the video game industry continues to expand, many developers are searching for new and different ways to use interactive sights and sounds to spark an emotional reaction in the player. Trauma tries to be such a game, using a series of photorealistic images to immerse you in the dreams of an accident victim. And so you explore this woman's psyche by clicking from one node to the next, Myst style, while searching for photographs and using mouse gestures to "solve puzzles." Those words deserve the quotation marks because these aren't puzzles. Each of Trauma's four scenes tells you exactly what to do with minimal effort--though you might argue that approaching this game as a traditional puzzle adventure misses the point. Perhaps Trauma is solely meant to inspire introspection or reflection on a particular theme. Unfortunately, it fails in this endeavor as well. There is plenty of visual and thematic allegory, but it doesn't coalesce into an evocative whole. Trauma is a tiny slice of nothing: 45 minutes or less of clicking for a high price of $6.99.

Trauma opens with a combination of live-action scenes and montages of images from within the game. A young woman and her passengers enter her vehicle, and she drives off. The car's headlights and taillights are depicted on the street as disembodied beams, and an entanglement of red and white intimates a serious accident. Then: a close-up of a closed eyelid; a shot of her face, covered by a breathing mask; close-ups of X-rays; and other brief images. The game menu then unfolds, and you select one of four vignettes that explore the survivor's dreams as she lays in a hospital bed, each a heavy-handed metaphor for some aspect of her life. A teddy bear crushed under an enormous weight; a ghostly figure rushing away, just out of reach; a lonely path that always ends exactly where it started. The themes are quickly obvious: lost childhood, the never-ending search for parental approval, and the like.

You interact with these scenes by clicking on various hot spots within attractive, photorealistic images that give the impression of moving about an actual place. This interaction is similar to how you move about in Myst and its ilk. As you click about, the woman narrates in an affected, emotionless manner; comments on the scenes; and gives you the solution to reach one of the level's four different endings. Photos are scattered about these areas. Some depict moments from the woman's past, while others introduce you to Trauma's single interesting gameplay element: mouse gestures. By swiping the mouse downward, you can zoom out. By swiping it to the right, you move to the node on the right. You also learn vital gestures that let you interact with certain views. One of them allows you to lift heavy objects; another clears underbrush out of your way. There are four such gestures, and each level introduces one of them.

That is actually a lot of description for what turns out to be hardly anything worth talking about. Each vignette has one main ending that you reach by performing (in the right place) the special gesture the level introduces to you. It takes about five minutes to click around, find the solution, and perform it; thus, the first time through, it takes about 20 minutes to complete Trauma. Each vignette has three alternate endings, however, that are uncovered by performing the gestures you learn elsewhere. Finding every photograph and seeing every additional ending might take another 20 or 25 minutes, meaning you can see Trauma in its entirety in less than an hour, with time to spare. And you won't find doing so a challenge. The photos and voice-overs tell you exactly what you need to do and where. Trauma requires no thought whatsoever.

While it takes the form of a traditional point-and-click adventure, Trauma clearly isn't intended to be a "game" as we normally think of them but rather a work of interactive fiction. There's room, and an audience, for entertainment like this, and much of it is worthwhile. The Path, Linger in Shadows, and other experiences have experimented with the medium's power to engage players in atypical ways. Trauma wants you to get lost within its heroine's dreams and remembrances. It doesn't want to challenge your problem-solving skills; it wants to challenge your emotions. And it fails. This woman is a shadow. You know nothing about her at the outset, and you emerge from Trauma knowing little more. The voice acting is emotionally distant. The woman is an actor reading a script, not a victim struggling to survive. There is no triumph in seeing her overcome her adversity because there is no connection between you and her. Trauma's themes are universal. Perhaps it intends for you to examine your own life as if it were you in that hospital room. But its ham-fisted metaphors and detached lead character discourage such analysis.

It is nice to look at Trauma's photos and vignettes. Maple trees dot an office park; a lonely road twists into the distance. Surreal sights, such as a crane lifting a giant heart, punctuate the levels, but to what end? The symbols are so smack-you-on-the-head obvious that there's no sense of mystery. The lead character and storytelling are so aloof that there is no emotional involvement. The way you interact with the game is too simple to encourage thoughtfulness. And the environments--highways, thickets--are too prosaic to promote reverie. Trauma doesn't have much to say, and it takes almost no time to say it. At $6.99, it's a waste of time and money. 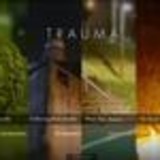 Trauma tells a story of a young woman who survives a car accident.