Trauma Center: Under the Knife Review

Trauma Center succeeds because it strikes such a good balance between its medical theme and its puzzler roots.

Trauma Center: Under the Knife is yet another in a recent deluge of anime-inspired adventure games for the Nintendo DS. In this one, you play yet another spiky-haired hero imbued with special powers on a quest to save the world. What's the hook? This spiky-haired hero happens to be a doctor. The threat to the world's safety, in this case, is medical terrorism. A rogue group with mysterious intentions is unleashing a man-made disease called GUILT upon the world, and it's up to you to stop them. You'll do that by doing what any good doctor would--performing a whole lot of surgeries. Wait, give it a chance. This isn't just some stodgy medical simulation. Trauma Center is more of a challenging puzzler with medical underpinnings than anything even remotely medical-simlike. The game makes solid use of the DS's touch-screen technology by putting the scalpel in your (hopefully) steady hands through a series of fast-paced, marginally insane surgical scenarios. It's an offbeat game for sure, and at times it can be a little too tough for its own good, but DS owners with a strong stomach and an open mind ought to have a good time with Trauma Center.

In the game, you play Dr. Derek Stiles, a young, relatively inexperienced doctor working at Hope Hospital. Derek's a little on the carefree side, a trait that he's frequently admonished for by his colleagues. Still, like any young, mildly cocky doctor, the point isn't driven home until Derek almost loses a patient due to his casualness. Derek is distraught after this, debating quitting the profession altogether. But then an emergency patient comes in, and--you guessed it--Derek is the only doctor who can save him. Things start to go horribly wrong, but then suddenly, time slows, and Derek is able to quickly patch up the injured patient, much to his nurse's amazement. It turns out that Derek is blessed with a gift known as the "healing touch," an ability that gives him superhuman speed and concentration while performing surgery. Explaining the plot beyond this would give too much away, but needless to say, it dives into incredibly ludicrous depths. The aforementioned medical terrorism and GUILT take up much of the story, leading Derek on some truly unique medical adventures. Take that, ER.

All of the main action in Trauma Center takes place on the touch screen. Along the sides of the screen, you have icons for all your main surgical tools, like your scalpel, clamp, laser, sutures, and even a futuristic antibiotic gel that actually cures minor cuts, and disinfects anything it touches. The bulk of the screen is taken up by your patient. You'll start off more often than not with an uncut patient that must be carefully cut open via the scalpel. Once in, you'll find the affected organ. Conditions vary from patient to patient. One moment, you'll be draining and removing tumors from someone's pancreas, and the next you'll be fighting off GUILT-infected tumors that actually will move around a given area, making them exceptionally difficult to nail down and remove. All of these cases require fairly specific orders of events, and the challenge comes from simply trying to manage all these different tasks while on the clock. Every surgery has a time limit, and all the while, a patient's vital signs must be kept stable. If the vital signs drop, you can take a moment to inject them a few times with more magic gel to restore them, but that takes time. You'll need to be extremely quick and mindful to succeed.

The basic actions you're required to do with the stylus don't require much more than a few types of movements. Suturing a wound simply involves zigzagging the stylus over a cut; removing of tumors or other ugly things involves following a set track of dots around the object with the scalpel as quickly (but carefully) as possible; draining excess fluids and blood involves placing the drain over the affected area and moving the stylus up the drain tube to emulate suction. Again, it's not the actions themselves that are challenging, but rather the brisk pace at which you must switch between them, and the aforementioned limits on time and vital signs.

In fact, at times, the pacing can almost be too much to deal with. Some of the late-game challenges often require some figuring out, even despite the help you're always given by your trusty nurse via the top screen in every surgery. At times, the time limits seem merciless with the tasks given to you, and there will be quite a few instances where you'll have to do surgeries over and over again until you either get lucky or figure out the sometimes obfuscated trick required to proceed. Sometimes, the zoomed camera angles can be a little touchy. More often, it's an issue with the game's perception of what is and isn't a circle. What we mean is that in order to zoom in on a section, you have to select the magnifier icon and draw a circle around that area. You have to be pretty precise about this, though, so quick circles often lead to an angry failure buzzer. That can be really annoying in a high-pressure situation. Still, surgeries are quite a bit of fun despite these occasional flaws, and they rarely require more than five minutes of your time, so it's not like you have to do an awful lot each time you repeat. It's just a little frustrating, is all.

If Trauma Center has any one major flaw, it's that it pads itself out a tad too much. The game uses a basic chapter structure for the story, with multiple sections within each chapter. Most of these sections each contain a single surgery event, but several of these sections are just story, with no action on your part except to press the button to keep the dialogue moving. The story mode itself isn't exceptionally long, either. Fortunately, there's a challenge mode in which you can play any beaten surgeries over again for higher rankings. Getting top ranks is no easy feat, so you ought to have a lot of fun going back and trying to perfect your surgical skills.

Trauma Center is a very anime game. The top screen displays all the characters as they converse with you, and each one is designed with the archetypal characteristics you'd find in just about any anime; spiky hair, overwrought poses and really big eyes, and so on and so forth. They're cool-looking characters though, and highly colorful. None of them ever animate, mind you--all the dialogue bits are handled with still frame shots and subtitles--but it's great-looking art design. As for the touch-screen action, the surgical bits are handled with some basic-looking 3D models. The game never gets overly gross with the action. Sure, some occasionally rank-looking fluids will pop up, but the game uses the effects sparingly, so you're unlikely to gag at the sight of too much blood or anything like that. So, while Trauma Center isn't exactly a technical powerhouse graphically, it's got plenty of charm and style, and what it's got works great contextually.

There's not an awful lot of audio in Trauma Center, which is unfortunate, because what it does have works well. There's plenty of superdramatic music to ramp up the tension during surgical sequences, and while some of it gets pretty repetitive, the majority of the music does its job nicely. There's almost no voice work, save for occasional utterances of words like "What the...?" and "Doctor!" by whoever's on the top screen during certain sequences. You'll get more than a few gooshy sound effects as you slice away at tumors and drain fluids, but again, it's all contextually correct and solid stuff.

Trauma Center succeeds because it strikes such a good balance between its medical theme and its puzzler roots. It's more than just a DS version of the old board game Operation, but it's also not so complex that anyone couldn't pick it up and enjoy it. While the mind-blowing storyline might lead some to scoff and the general brevity of the gameplay might give you pause, overall, there's a fun time to be had with Trauma Center, and it's definitely worth your while to check it out. 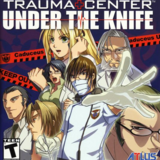 Trauma Center: Under the Knife
Follow
$19.99 on Walmart
Buy 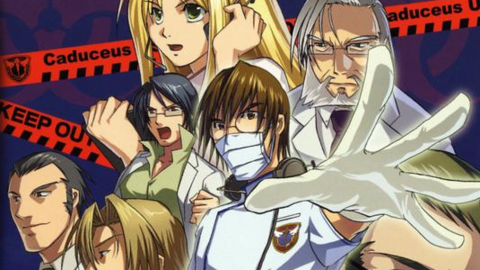 Trauma Center: Under the Knife

Trauma Center: Under the Knife lets you play doctor. Use your stylus as a scalpel to solve complex surgical puzzles in an attempt to save the lives of your patients.

8.4
Sign In to rate Trauma Center: Under the Knife