Though it's nice to see a new, cleaned-up version of TransWorld Surf, the additions Rockstar San Diego has made to the game hardly seem to merit a year in development and a new subtitle.

When it was originally released on the Xbox, TransWorld Surf was the first surfing game to really bring the sport of surfing to gaming in a cohesive package. It looked good, it sounded good, and most importantly, it played great, providing responsive handling, a strong library of tricks, and some varied secondary objectives. TransWorld Surf got retooled a bit when it was brought to the PS2--its difficulty was toned down and its formula was refined--though in the process of dumbing down the graphics for the PS2, the game suffered from some significant frame rate issues. Now, Rockstar San Diego, the development house formerly known as Angel Studios, brings TransWorld Surf: Next Wave to the GameCube, which is basically the PlayStation 2 version of TransWorld Surf without much of the slowdown and with a few incremental additions. It's arguably the best version of the game to date, but a year and a half after it was released on the Xbox, the game doesn't have quite the same impact.

Though it uses several conventions laid down by both Tony Hawk and SSX, TransWorld Surf offers a unique gameplay experience. Your surfer can perform a variety of wave-face tricks, lip tricks, and aerial tricks. Face tricks include cutbacks and bottom turns, which are executed simply by cutting back and forth across the face of the wave, as well as the more advanced snap turns. You can perform three different types of lip tricks, known as floaters, which are the surf equivalent of grinding, and there are also a variety of aerial tricks at your disposal. Points can also be scored by riding inside the curl, a relatively simple task, but the claustrophobic feeling you get inside the barrel really makes it one of the most enjoyable portions of the game. Each surfer also has a special trick that can be executed only after you've filled up your trick meter, which is done by pulling off big combos.

Combos in TransWorld Surf are much more forgiving than in other board sports games. Instead of having to transition directly from one trick to another, you can make your combo a set of maneuvers performed in quick succession, with the score being multiplied by mixing up what types of tricks you pull off. The game's physics model generally works well, though you'll occasionally find yourself in a physically impossible position or wiping out for no apparent reason. Considering the complex physics associated with surfing, these problems are almost forgivable, though it doesn't keep them from detracting from the experience. Players who approach TransWorld Surf as if it were a skateboarding or snowboarding game will be brutally rebuffed, as the rhythm is fundamentally different from those two sports. The game sports a pretty helpful tutorial mode, which is a must for beginners.

The different modes of play in TransWorld Surf are the action sports standards: There's a pro tour mode, a single run mode, a free surf mode, and a multiplayer mode. In the pro tour mode, you'll take one of 13 pro surfers through the game's 11 locations. You'll surf each location at two different times of day--with these runs being goal-based--and enter a competition run before moving on to the next location. In the goal-based runs, you're given a set of objectives that must be completed before you can move on to the competition and, ultimately, to the next location. Each level has the standard point objectives, as well as a photo-shoot objective, where you must pull off a trick within sight of a surf photographer hanging out in the water. Other objectives call for you to perform big trick combos or especially long barrel runs. Each level also has an objective specific to the location. As you play through the game, you'll have to free dolphins from tuna nets, scare birds away from the surf, and ollie over boats. These location-specific objectives are usually some of the most difficult to accomplish and don't feel nearly as natural as some of the other skill-based goals.

As a fairly straight port of TransWorld Surf for the PS2, Next Wave places large, brightly colored icons next to goal-related items, making your objectives clearer. If you have to ride a wave all the way down the line, you'll see a checkered-flag marker at the end of the wave. If you have to scare birds away from the surf, a really big arrow will appear over the appropriate birds. In the competition mode, you'll face three other pro surfers in three three-minute heats. You'll be judged on the quality of your run, with points being docked for wiping out, snaking waves, and running into or spraying another surfer. The notable multiplayer modes in Next Wave include king of the wave, where players try to knock each other off a shared wave while pulling tricks, and the GameCube-exclusive shark tag game, where players alternate between playing as a surfer and playing as a shark. The objective of the shark is to hunt down and eat the surfer, while the objective of the surfer is just to stay alive. The variety of play offered by TransWorld Surf keeps things interesting, and while the trick system isn't the deepest ever, it's deep enough and finds an equilibrium between intuitiveness and challenge.

Next Wave boasts one new level over its PlayStation 2 counterpart--a frigid, glacier-filled Antarctica level--as well as a collection of unlockable novelty characters, including Neptune, king of the sea, and a Creature from the Black Lagoon-inspired sea monster, among others. The one new level is a nice addition, though the extra characters just seem like a goofy, forced way to try to give the game an "edgy" personality, and on the whole, these little GameCube-exclusive bonuses don't seem to justify the year it took to port the game from the PlayStation 2.

TransWorld Surf is the first surfing game to acknowledge that surfing does not occur in a vacuum. While you're out on the water, you'll encounter debris in the water--man-made and naturally occurring--a variety of sea life, and other surfers. The game has a karma meter, which will move from good to bad depending on how you interact with the surfers and the sea life. If you snake waves from other surfers, spray them with your wake, or generally mistreat the marine life, you're more likely to get abused by other surfers or, worse, eaten by a shark. It's really a minor point, and if you didn't know about it, you might simply chalk your bad luck with sharks up to fate. But knowing about karma and using it to your advantage will make playing TransWorld Surf a more enjoyable experience.

The sound in TransWorld Surf really works well on multiple levels and comes together to produce a truly immersive effect. Each round of surfing is introduced with an announcer breaking down the current conditions of the surf, such as wave size, tide conditions, and the temperature of the water. The environmental sounds are generally solid, but it's the smaller details that really do an excellent job of selling the surfing experience. The splash of your surfer paddling to the next big wave, the increasing roar of the water as a curl slowly creeps up behind you, the muffled sounds you'll hear once inside the tube, and the fizzing of the sea foam as you pass over a wave are all expertly executed. The soundtrack is also quite impressive, if only because of the sheer volume of songs available. Instead of falling back on a soundtrack of Dick Dale-style surf-rock filler, TransWorld Surf actually has eight different soundtracks that cover a variety of musical genres. A lot of the songs appear in multiple soundtracks, making each soundtrack a bit more like a mix tape, but with more than 70 different songs on the soundtrack, there's still plenty of music to go around. Whether you prefer punk rock, alterna-rock, heavy metal, hip-hop, down tempo, or good old-fashioned surf rock, TransWorld Surf has a soundtrack for you.

Visually, Next Wave makes some improvements on the PlayStation 2 version of TransWorld Surf. The basic surfer models are still roughly the same, which is to say they generally look good and animate smoothly. The water looks a touch more realistic, featuring the same excellent wave forms, though the surface of the water is still more reflective and metallic-looking than it should be. The single biggest enhancement Next Wave makes over its PS2 predecessor is the virtual elimination of slowdown. That game was simply riddled with slowdown, and Next Wave squashes the problem pretty thoroughly, though you might see a little stutter when transitioning between the actual game and the overview map.

Though it's nice to see a new, cleaned-up version of TransWorld Surf, the additions Rockstar San Diego has made to the game hardly seem to merit a year in development and a new subtitle. When TransWorld Surf first launched on the Xbox and PlayStation 2, there wasn't any real competition in the genre. But at this point, Treyarch's enjoyable Kelly Slater's Pro Surfer has established itself as the premier surfing game for the GameCube, and Next Wave just doesn't have what it takes to dethrone it. 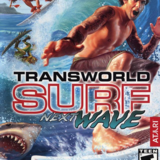 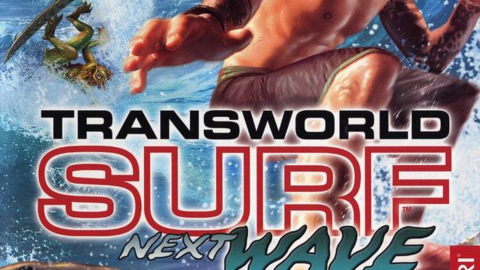 Though it's nice to see a new, cleaned-up version of TransWorld Surf, the additions Rockstar San Diego has made to the game hardly seem to merit a year in development and a new subtitle.