After years and years of waiting, Transformers fans finally have a big-budget, US-released action game starring the robots in disguise to call their very own. Titled simply Transformers, this new third-person shooter from Atari is based on the recent Transformers toys and cartoon series, which have subtitles like Armada and Energon, rather than the original toy line and television show from the early '80s that most 20-something gamers will be most familiar with. However, you'll still find plenty of (slightly modified) familiar faces in the game, like Optimus Prime, Starscream, and Megatron. More importantly, once you dig into Transformers' gameplay, you'll find a surprisingly intense combat model that's pretty tough but also rewarding once you get a handle on it.

The storyline in Transformers can be reduced to "Autobots versus Decepticons" without much effort. You'll play as one of three autobots--everybody's favorite Optimus Prime; the well-rounded Red Alert; and the quicker, weaker Hot Shot--and you'll fight your way through a linear progression of stages, blasting everything in sight. Both factions are scouring the earth in search of the mini-cons, a long-lost race of miniature transformers whom the big guys can equip to gain new weapons and other abilities. Each of the game's seven regular levels has several mini-cons scattered throughout, some that are harder to find than others, and you'll be able to revisit completed levels later to pick up mini-cons that you missed or couldn't access before.

Transformers' focus is squarely on shooting, and it's you against wave after wave of "Decepticlones," the endless army of lesser robots that Megatron has devised to eradicate the Autobots. You start off with only a basic blaster and jumping ability, and you're thrown up against daunting odds almost immediately--the game loves to throw a dozen or more fairly powerful enemies at you at one time. Strategic and varied use of your mini-cons is key to surviving the game's rigorous battles, since some weapons and abilities will be better suited to a given situation than others. You'll get various energy weapons, rocket launchers, and a sniper rifle (among others) to round out your arsenal, and an energy shield and recharge ability are just a couple of the defensive abilities you can gain. Even tertiary stuff like a hang glider and a robot version of thermal vision are available.

You can equip only four mini-cons at a time (one bound to each shoulder button), and since each carries a power rating that fills out a portion of your maximum power capacity, you can't have just any combination of the best mini-cons at all times. Furthermore, the mini-cons are color-coded, and if you match up colors properly you can even get boosts to your health and other systems. It might sound complicated, but coming up with new mini-con configurations is a big part of the fun in Transformers.

The other big part of the fun is, well, blowing up lots of robots. Once you start getting better weapons, you'll lay waste to the Decepticlone hordes with abandon, which is honestly pretty darn satisfying in itself. The enemies are governed by a rudimentary physics model, so you can fire a pair of spiraling rockets into a cluster of them and watch the robots go flying in all directions. The shower of debris that results from every successful kill is also gratuitous and rewarding.

Of course, it wouldn't be a Transformers game if you couldn't transform at the touch of a button, so thankfully, you can. Each of the available autobots turns into a four-wheel vehicle of some kind (Prime into a tractor trailer, Red Alert into an SUV, Hot Shot into a sports car), and you can drive from point A to point B a lot faster than you can run there. Occasionally you'll have to use your vehicle form to jump a gap or surpass some similar obstacle, but just as often you'll be fighting in such tight quarters that you don't even have room to drive anywhere. The vehicle mechanic is perfectly serviceable in the game, but it would have been nice to see a little more done with it, perhaps by including Autobots that transform into something other than cars as playable characters.

The game is a lot of fun, but it isn't without a few minor faults. For one, it can be pretty tough when you've got two dozen enemies bearing down on you with no cover in sight. The controls are a little sluggish--perhaps intentionally so, since they convincingly convey the feel of controlling a giant robot. Anyway, you'll often take a lot of hits that you just can't move fast enough to avoid. Your own characters use rag-doll physics when they fall, and you can't regain control until the animation has completely played out. This sometimes takes longer than it should, allowing enemies to gain a better position to blast you again once you finally get up. These are small issues, though, and they certainly shouldn't prevent you from checking the game out.

Graphically, Transformers turns in a solid effort. The game's levels are very expansive and employ a nice use of color and lighting to give each one a unique visual flair. All of the game's licensed characters are nicely modeled after their toy and TV counterparts, and the original robots are pretty varied and fun to blow up. The game's frame rate is pretty smooth, most of the time; when it's not, a stylized motion-blur effect kicks in that helps cover up the slowdown without being distracting. All in all, the game looks great. But the audio component of the game isn't quite as strong as the visuals. The sound effects are pretty good, but the music isn't terribly memorable, and the occasionally bland voice-over just doesn't compare to the charismatic acting heard in the original Transformers way back when (though Optimus Prime is pretty darn close).

Transformers is about as action-packed and satisfying a third-person shooter as you're going to find on the PS2 right now, and it makes pretty good use of its license, too. Besides the familiar characters and the transformation ability, you can also find "data-cons" scattered throughout the game that unlock toy photos, concept art, classic public-service announcements, and a lot of other goodies. The game has decent replay value, since it has three distinctly different difficulty modes, plus lots of hidden mini-cons and data-cons to find after the fact. And even if you only play through it once, fighting classic boss characters like Megatron, the 900-foot-tall Tidal Wave, and the planet-sized Unicron is pretty nifty in itself. Overall, Transformers is an especially easy sell to diehard fans of the franchise, but it's equally recommendable to fans of action games in general, too. 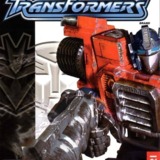