If you weren't familiar with the TrackMania series, you might expect a conventional racing game in TrackMania Wii. In fact, this is a generously sized set of time trials on increasingly tricky tracks, and boasts a comprehensive track creator, a stunt-heavy platforming mode, plus a nifty puzzle mode that combines building and driving. The point of TrackMania Wii (known as Trackmania: Build to Race in the US) is to navigate twisting stunt tracks at top speed, shaving fractions of seconds from your record; your "racing" rivals are only ever ghost cars. The most advanced of the 200-plus courses feature boost strips, loops, enormous jumps, and tilting stretches of elevated road; these are equal parts exhilaration and aggravation, with the balance occasionally tipped towards the latter. At TrackMania's lightning speeds, the difference between triumph and disaster is an infinitesimal steering nudge. Subpar music and so-so visuals diminish this substantial, challenging bundle, as do the occasional spikes of frustration; on the hardest tracks the times set by the bronze, silver, and gold medal ghost cars are excessively tough.

In single-player Race mode, there are dozens of tracks to unlock and master, ranging from practice difficulty to extreme. The tracks are divided across six environments (stadium, coast, island, desert, snow, and rally), with each offering a single car type--a racing car for the stadium, a pickup for snow driving, and so on. Tracks are unlocked by earning medals, one of the game's currencies. The other currency, coppers, is used to buy further tracks, as well as car skins and building blocks for the track creation mode. Race mode alone will keep even skilful drivers occupied for a long time, and you can expect countless restarts on the most challenging tracks (an instant restart button does go some way to mitigate frustration). These tracks offer the biggest thrills, too; if you've got the resolve to try and try again, the eventual flawless corner, a soaring jump, or sailing through the finish line just ahead of the gold medal ghost car is elating.

The six car models are skinnable but not tunable, and each has a distinct handling type--an unsubtle but appropriate caricature of what you might expect from the real thing. The racer sticks like glue to the stadium tracks, the pickup chugs up snowy slopes, and the finicky handling on the desert's bulky muscle vehicle compounds the difficulty on complex sandy tracks. Of the control options (tilt, directional pad, or nunchuk), the remote and nunchuk scheme works best, with the analog stick providing the smoothest steer. The single-player offering's Platform mode puts a nice twist on the time-trial race format: success on the dedicated, stunt-based tracks (with plentiful tricky jumps) is determined not by how fast they are completed but by how many times you need to restart at a checkpoint.

The frustration of a problematic track isn't eased by the music. The repeating loops of cheery, samey tunes are forgettable at best. At worst, on a track you've failed and restarted more times than you'd care to mention, they are the exasperating soundtrack to your grind of failure. The visuals are likewise disappointing. Plain textures and jaggy edges spoil the view throughout. Low frame rates are especially noticeable in the split-screen mode, and the low-detail car models don't entice you to spend coins dolling them up with new skins.

For the third single-player mode, Puzzle, you need to get to grips with the track editor: an admirably complete toolkit for creating custom tracks, the hallmark of the TrackMania series. The nunchuk's analog stick is used for positioning the camera, with the remote's pointer used to select tools and place the various building blocks of track and scenery. It works fine, though you won't be whizzing through track creation with the same speed and precision that you might be able to with a mouse. Puzzle mode has you connect a start and finish point with a limited number of track blocks and then drive it in the shortest time possible--a neat mix of the game's two key components. Puzzle challenges start trivially easy and become genuine brainteasers, though the whole mode is a much smaller offering than the centrepiece Race mode. Sharing player-made content was at the heart of TrackMania's earlier PC titles, but it is more restricted here; you can share tracks only with registered friends. There is free DLC to be had, at least--extra tracks created by the developer are available for download from within the game.

The multiplayer suite is more open. Besides the local split-screen for up to four players, and the pass-the-controller hotseat mode, the online multiplayer allows both quick matches and friend matches against up to six other people. Online, there are two variants of multiplayer action: a time attack mode, in which you aim to beat each other's fastest time on a shared track, and a rounds mode, in which you aim to finish a track in first place through multiple attempts. "Racing" other drivers who appear only as ghost cars on your track is purely competitive rather than combative. Being able to shunt and otherwise harass rivals might have made for a cheeky change of pace, but might equally have made the twisty, concentration-demanding stunt tracks impossible to complete. The multiplayer menu also offers up global leaderboards, with world and friend rankings, plus record times.

TrackMania Wii's underwhelming music and visuals belie a strong, expansive driving game, with masses of tracks to master and medals to win, and a flexible, intuitive track editor. The mismatch in quality will turn off plenty of players, and others may balk at the forbidding upper reaches of Race mode. Complex stunt tracks, particular handling, and demanding target times can occasionally conspire to edge the game into frustrating, obstructive difficulty, but tenacious and skilful drivers should enjoy rising to the challenge. 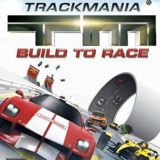