TrackMania 2: Canyon is an exciting arcade racer that fluctuates between the highly accessible and the extremely complex.

Fire the engine. Cut the first corner. Pull off a smooth drift. Crash headlong into a wall. Hit the restart button. Fire the engine. This is how TrackMania 2: Canyon begins, and for a long while this is how it stays. That's not a bad thing. This isn't a game about winning; it's a game about trying. Trying to get gold, trying to beat your friends' times, trying to shave a millisecond off your own score. It's a game about restarting, and frequently at that. For existing TrackMania fans, this description is surely familiar. The series stays true to its roots with the sequel, with an emphasis on quick-fire segments of gameplay, all neatly tied together in a package for the social media age.

Getting into TrackMania 2 is a simple affair. Solo play consists of 65 tracks, the majority of which are unlocked by obtaining medals. You load up a track, start your engine, and then keep playing until you set a time you're happy with. It's great if you're interested only in score chasing, although it's far from a shallow game. Each track has been expertly designed with the leaderboards in mind. Nailing the perfect racing line to achieve the best time takes practice and experimentation as you figure out how to cut corners and start drifts earlier.

Learning the best routes around stages is never a chore. The majority of tracks last anywhere from 18 to 40 seconds; they're short A-to-B sprints that take you around hairpin bends and over dizzying jumps. Frequently you find yourself driving up walls or drifting vertically around a quarter pipe. These stages are short, but the desire to stay on a given track, chasing the best time you can, is encouraged at every point. Each track offers up a bronze, silver, and gold medal to obtain, as well as an official time to set. These times can be challenged every five minutes, with a timer in the bottom right corner counting down until your next attempt. Setting an official time awards you with skill points based on how well you performed overall and contributes to your online leaderboard ranking.

Racing around the tracks is fun and breezy, thanks in part to the superb handling and easy learning curve when it comes to drifting. There's only one car type, so the focus is on learning the tracks rather than worrying about which vehicle to use. This gives TrackMania 2 Canyon the feel of a puzzle game as much as a racer, and it's great that when a friend beats your time you know that he's driving the same car that you do. Keyboard controls are tight, with subtle manoeuvring and wide drifts being easy to pull off with the arrow keys. Using a gamepad is even better, because the full analogue controls lend themselves well to the game. You frequently make twitch adjustments to your racing line, and either control method is conducive to this.

Trying to set the best time can be frustrating, but usually in a "just one more go" way. A few of the tracks are just plain annoying, though, as some of the longer ones end with a jump or a turn that can easily blindside you. But the immediacy of restarting (hit a button and you're instantly back on the starting grid) makes even the most irritating tracks seem reasonable. Less fun are the lap races, which occur every fifth track. These five-lap affairs are decent enough, but if you're going for gold, then they can feel like a bit of a slog when you mess up towards the end of the fifth lap. The variety and length of the A-to-B tracks make them far more entertaining.

There are no physical opponents on the track. You can choose a ghost to race against from either the preset AI ghosts, your own favourite replay, or the replay of someone on your buddies list who has set a better official time than you. Usually there are three vehicles on the track: you, the ghost you chose to race against, and the ghost of your last attempt. Multiplayer is similar, in that while you can see other cars, they take the form of ghosts. The main mode is Time Attack, in which you and various opponents race on a series of tracks, with five minutes to set the best time you can. It serves as a fun competition as well as a learning tool, being able to see the racing line that a car ahead of you is taking without having to worry about overtaking it yourself. There are other modes, like Laps and Cup, which see you racing directly against opponents, but finding a server doing anything other than Time Attack is currently nigh on impossible. Luckily there's the option to create your own and invite friends. These multiplayer options are also available to play locally, either in turns or in split-screen.

There's a big focus on community in TrackMania 2, and this is reflected in ManiaPlanet, the Facebook-esque platform from which the game launches. Through this interface you can see your current ranking and the overall leaderboards, and you can even read the game's forums. When friends set a time which beats yours, you're sent a message alerting you, and by clicking on it you can immediately challenge their ghost. It's a neat idea for a user interface, although it could do with a little fixing up; it's not the easiest thing to navigate, and it's only after playing around with it for a while that you fully get to grips with it. It's strangely contrary to the accessibility of the game.

Customization and user-created content have always been staples of TrackMania, and it's no different here. There's a track editor, which lets you create tracks to share online, and a selection of paint tools with which to customize your cars. The track editor thankfully offers a Simple editing mode, as well as the more complex Advanced mode, which is difficult to get comfortable with at first. The same applies to the replay editor, which is reminiscent of professional editing software. Luckily, each track has default camera angles for replays too, so saving decent movies (which can also be shared or converted to video) is entirely possible with no editing ability.

The complexity of some of the features is the main reason TrackMania 2: Canyon may be off-putting to some. Make no mistake: it's to the game's benefit that it's customizable and open to modding. But unless you're prepared to go to external sites to find new tracks, or you have image editing or 3D modelling skills in order to make decals and new cars, then it's possible to feel as if you're not getting as much out of the game as you could be. Very few aspects of the more advanced components are handled in-game. Grabbing a new track requires you to find it on the Internet or receive the file from someone and extract it into the correct folder which can be accessed via the launcher program. The same is true of cars and most of the replays of official times that are downloaded if you challenge them via the buddy list. Thankfully there's the option to create a "pack" which can be shared, containing multiple tracks and cars, so each individual file doesn't have to be downloaded separately.

Despite this, there's still a highly accessible time trial game here. Given TrackMania 2: Canyon's cheap price, it's a good value even if you're interested only in the vanilla solo and multiplayer modes. It's also a great-looking game. Dust kicks up as you race across canyon floors, and the exaggerated damage model causes cars to bend and buckle into glorious wrecks. Thankfully, the fairly basic soundtrack can be replaced with your own music, and custom maps can have their own songs attached to them.

TrackMania 2: Canyon is a game that tries to cater to as many players as possible, even if the gulf between the simple and the advanced is rather wide. Whether you're heavily investing in the community aspect, or simply racing the different tracks to set some times and save a few sweet-looking replays, the game is loads of fun. While it's hard to shake the feeling that some things, like content sharing, could be a little less slapdash, it's also hard to ignore the potential for community expansion. It's not really a game for those who like their racers to be a little more grounded and a little more focused on progression, but it manages to be rewarding even though you're just replaying the same track over and over, trying to beat a ghost by a millisecond. TrackMania 2: Canyon makes it clear that it's the taking part that counts, but it proves that taking part and then winning is even more of a thrill. 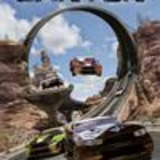